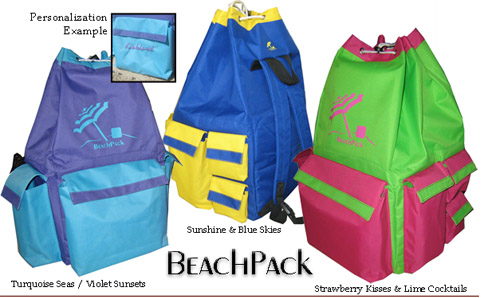 Celebrate the first day of Spring by getting organized for a summer at the beach, lake or pool!  We’re thrilled to give you the chance to win a BeachPack— Mamanista’s pick for the best beach bag!

The BeachPack was invented by Terry Donze, a mom who grew frustrated with how difficult it was to lug all of her children’s gear to and from the beach.  Standard beach tote bags would constantly slip off her shoulder and weren’t great for her back either.  Plus, packing the standard beach tote was a pain since she needed two hands to cram the towels into the bag. And when she got to the beach, all her stuff would be jumbled together inside the huge tote- making it difficult to find what she needed quickly.

Terry wanted a backpack-style bag she could pack easily and that was large enough to organize towels, sunscreen, reading materials, snacks, bottled water, a cellphone, and other beach essentials.  As the creators of the popular line of Game Savers organizers  sold at The Container Store and online at www.gamersavers.net, Terry and her two sisters Suzanne and Mickie had experience designing products and turning an idea into an actual prototype. After a lot of hard work, the beach bag of Terry’s dreams became a reality.

The BeachPack is painless to pack since it was designed to stay open and upright when placed on the ground. (I was able to toss in my fluffy, oversized beach towels without even bending over!)  It has lots of exterior and interior pockets to organize everything you need for a day at the beach or pool, which means you won’t have to waste time digging around for items you need at the bottom of your bag. And since it’s a backpack, you can tote massive amounts of gear and still have your hands free to carry baby or your beach umbrella.

The BeachPack holds up to 5 beach towels and is the perfect size for families. (Starting in May 2008, couples looking for a smaller bag will be able to buy a Mini Beach Pack that holds 2-3 towels.) The BeachPack is made from durable PVC-coated polyester, comes in three color choices, and sells for $45.95 at www.beachpack.net.

For an additional $5, you can even personalize your bag by having your name embroidered on the front pocket. Since I guarantee you that your friends will beg to borrow this bag, I’d invest in the personalization to ensure you get your BeackPack back after they’ve fallen in love with it!