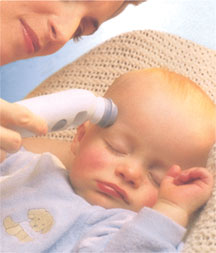 Many first time parents are watchful for signs of illness, and fever may be an early symptom that your baby needs to see a doctor.

In general, a sick baby will act sick.  But taking a child’s temperature is a helpful hint.

From the beginning, my daughter resisted all attempts to take her temperature.  We tried the underarm thermometer (required pinning her down as she howled in rage), the ear thermometer (just plain out of the question), and the pacifier thermometer (worked unless she popped it out of her mouth in curiosity).

Because she squirmed and fought, we could never get anything approaching an accurate reading.  Even the nurses had trouble taking her temperature.

All of these thermometers share the same problem–you have to insert them for several minutes to get an accurate reading.

That’s where Exergen TemporalScanner comes in.

Essentially, I just take the Exergen TemporalScanner infrared thermometer and place it on my daughter’s forehead, dragging it gently to her hairline.  In just two seconds, I have an accurate temperature reading for my baby.

If you want to know how it works, it “captures the naturally emitted heat from skin over the temporal artery.” Because this artery runs directly from the heart to close to the skin’s surface, you get an almost ideal reading.  All I need to know, though, is that it is super-accurate, non-invasive, and quick.  You could even take the temperature of a sleeping child (well, maybe not my sleeping child…but most sleeping children).

for $29.92 (or try Costco, which has the thermometer for the same low price). Plus, ask your pediatrician or visit the Exergen product page for a $5 Exergen TemporalScanner Rebate Coupon Code.

If you find it difficult to take your baby’s temperature with a regular thermometer, then the Exergen TemporalScanner Thermometer is worth it.