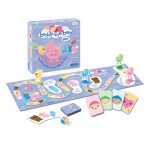 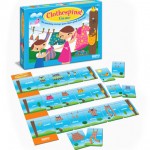 I have so many positive memories of playing games with my brother and parents on rainy afternoons and on family game nights.

Our post on “How to Organize Your Board Games” had a lot of reader feedback.  Thanks for sharing all of your favorite games. Your comments got me thinking about how much fun board games are. I think it’s time for me to rediscover my love of games and to bring back family game night!

I’m definitely going to invest in Candy Land, which was one of my favorite games as a kid. But I also want to try some new games too. I recently received review samples of The Clothespins! Game and the Beddy-Bye Baby Game from Briarpatch.

You might not have heard about Briarpatch before since this company wasn’t around when we were kids. But Briarpatch has earned over 270 awards since its founding in 1992, and I like their eco-friendly business practices– such as using vegetable and soy-based inks.

Since Baby Mwah has a few years to go before he’s ready to play games,  I invited over some friends and their tots to test them out. I wanted to see if the games would entertain the kids and be fun enough for parents to tolerate.

Beddy-Bye Baby is a sweet game for the pre-school set and is particularly appealing to older siblings who are learning to cope with a new baby in the house. In this game, each player selects a baby and carriage in pastel pink, blue, yellow, or green. On turn, players roll the rattle die and move their carriages down the path to beddy, while collecting a teddy bear, baby bottle and snuggly pajamas. The first player to enter the nursery with all of baby’s needs and snuggly tuck in baby wins the game.

Up to 4 people can play this game, and no reading is required.  My tot testers liked rolling the die since it sounded like a rattle when shaken. Since this is a game of chance, one of the kids cried when he lost. But it was a good opportunity for his mommy to tell him about being a good sport. And he happily played another game.

The Clothespins! Game was designed for children ages 5 and up, but the parents I played with enjoyed its fast-pace. (It also gave them a chance to tell their kids what a clothesline was!) The object of this rummy style game is to score the most points by completing all three of your clotheslines, while placing three or more matching laundry cards in your hand on each line along with a finishing pole to close the line. Clever players use their bird cards to swipe laundry from an opponent or move clothes from one clothesline to another. The kids really got into the competition. I would caution parents that some children might get upset if another kid uses a “bird” card to swipe one of their laundry cards. But that provides an opportunity for parents to teach important social skills like good sportsmanship and respect for fair play. Overall, we had a blast playing this game.

Want It:
These games are available at www.briarpatch.com and at Amazon (Beddy-Bye Baby is $9.99 and Clothespins! is $11.73).

Win It:
To win one of these games, leave a comment on this post by 11:59pm on August 27, 2008 letting us know your favorite Briarpatch Game (www.briarpatch.com) or your favorite family game night memory.