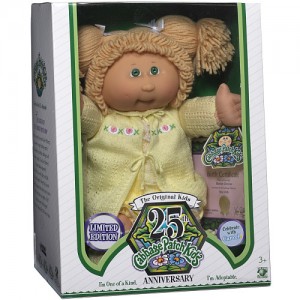 For Christmas 1983, the only thing I wanted from “Santa” was a Cabbage Patch Kid. Just about every kid in America wanted one too, so they were nearly impossible to find in that pre-eBay era.

I remember watching the mob scenes on TV: hordes of parents rushing toy stores, Cabbage Patch Kids being transported in armored cars, a mailman flying to England to buy one for his daughter.

As my parents went from toy store to toy store searching for an authentic Cabbage Patch Kid, my grandmother took decisive action. After asking lots of friends and even random strangers, she heard about a woman in Georgia who was making “homemade” Cabbage Patch Kids. My grandmother contacted this friend of a friend of a nurse she met at her doctor’s office to order the exact doll I wanted: a blond haired doll with long hair in pigtails wearing a pink dress.

Shortly before Christmas, my parents found a “real” Cabbage Patch Kid at a local toy store. I was so excited to find that doll under the tree on Christmas morning.

My grandmother arrived at our house for Christmas Dinner carrying that “homemade” Cabbage Patch Kid, wrapped in a real baby blanket. When I answered the door, I thought she’d had a baby. “No,” she told me, “I didn’t have a baby, but I do have a baby doll for you.”

I named my doll after my grandmother, so I’m pretty sure I was one of the only kids in America to have a knock-off Cabbage Patch Kid named Ethel.

I treasured both of my Cabbage Patch Kids, and I carried them everywhere. My friends pointed out that “Ethel” wasn’t a “real” Cabbage Patch Kid, and classmates made fun of the name “Ethel.” I didn’t care.

You can share your own Cabbage Patch memories at www.cabbagepatchkids25.com. And I’d love to hear them too if you can list them in the comments.