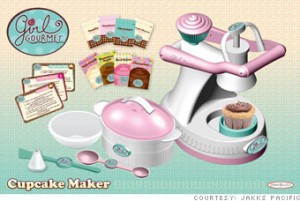 Preparing food often seems like a chore to adults, but it is fascinating and exciting to children.

When I was little, I adored my Snoopy Snow Cone Machine and Easy-Bake Oven.  When I look at these products from an adult-perspective, they seem so flawed. I remember how hard it was to crank the handle on the snow cone machine. And the 1980s version of the Easy-Bake Oven is a known fire hazard. Plus, the cakes and cookies I used to make were far from gourmet. But viewed through a child’s eyes, these two toys were magical.

JAKKS Pacific sent me a Girl Gourmet Cupcake Maker and Girl Gourmet Ice Cream Sandwich Maker to review. You might have seen these toys recently on the Today Show as they’re expected to be hot sellers this Christmas.

You can make four different types of cupcakes in about 30 seconds using the Girl Gourmet Cupcake Maker. But the real thrill is using the cupcake froster and the included sprinkles to decorate and personalize your cupcakes.

Our first attempt to frost a cupcake made a bit of a mess since we’d added too much water to the frosting. The runny frosting splattered out of the froster at a fast pace- much to the delight of my helpers.

According to the instructions, the frosting needs to have a firmer consistency similar to a thicker toothpaste or a cookie dough. Our second attempt at frosting was much more successful. While we never replicated the perfect swirls shown on the box or in the commercial at www.mygirlgourmet.com, the kids still felt a lot of pride in their creations.

While my “adult” side is slightly annoyed by the Girl Gourmet name (boys can cook too!), concerned about the expense of the refills cupcake mixes, and worried about the number of calories in the cupcakes, my “inner-child” found the Girl Gourmet products appealing. And my reviewers (aged 8 and 9) had a great time making and frosting cupcakes and molding ice cream into sandwiches.

I sampled all four varieties of cupcake (Vanilla, Chocolate, Cinnamon Sugar, and Red Velvet). While they don’t taste as good as my favorite treats from Magnolia Bakery in New York, they passed the kids’ taste tests with flying colors. And I have to admit that they were a lot tastier than the stuff I used to make in my 1980s-era Easy-Bake Oven.

Based on the enthusiastic endorsements of my kid testers, I have a feeling that the Girl Gourmet Cupcake Maker will be a big seller this holiday season.