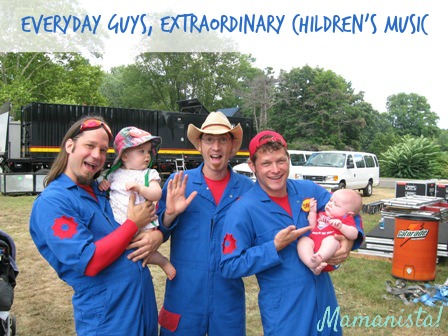 The Imagination Movers gave a great concert at the Disney Music Block Party that had the little kids dancing and bopping along. Based on my brief interaction with the band, I think they seem like genuinely nice guys too. (Scott, Smitty and Dave are pictured here with Baby Mwah and his Gal Pal.) For example, Dave, who is holding Baby Mwah, volunteers as a Cub Scout den leader and coach for his children’s t-ball, basketball and soccer teams. These former neighbors started writing and performing music after the deaths of Captain Kangaroo and Mister Rogers since Scott noticed a lack of male role models in children’s programming.

Three of the band members lost their homes to Hurricane Katrina, and the band wrote the touching song “We’ve Got Each Other” in response. The band raises money for local children’s charities and is committed to rebuilding the Big Easy- even filming their new Playhouse Disney TV Show in the city of New Orleans.

Dave, a former architect and father of two, interjected, “As parents, we kind of had ideas about what was appropriate and what children respond to…but we did want to go out and make sure somebody else validated that what we had in our heart and our gut as parents was also appropriate and that it fit within the educational and developmental standard.”

This unique combination of fatherly intuition and advice from childhood development experts works. I have 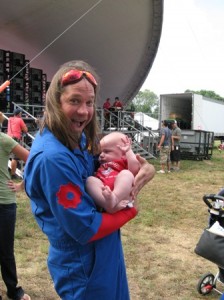 friends who have used the song “I Want My Mommy” to encourage their kids to sleep in their own beds at night and “The Medicine Song” to get their kids to take their medicine.

So I asked the Movers whether they’ve been able to use their song “Clean Your Room” to persuade their kids to actually clean their rooms. Unfortunately the answer is no, but the Movers do successfully remind their kids to “use the magic words”- a reference to their “Manners Song.”

The Imagination Movers have a new live-action series premiering on the Disney Channel on September 6th. I had a chance to preview their new show, called “Imagination Movers.” The series takes place in a colorful “Idea Warehouse” with magical, imaginative rooms and an adorable puppet, the Warehouse Mouse. The Warehouse has a cool Willy Wonka meets Pee Wee’s Playhouse meets Mr. Rodgers vibe.

Each 30 minute episode features five music video style songs by the band and a plot in which the Movers brainstorm problem-solving techniques and use teamwork and creativity to solve “idea emergencies.”

Three of the five songs will be repeated in each episode, which will give your kids the chance to learn the words and sing along. The song “Mover Music (Jump Up!)”  is one of my favorites from the Juice Box Heroes

CD since it encourages little ones to “Reach high, think big, work hard, have fun!”

“Imagination Movers” is part of the Disney Channel’s learning-focused Playhouse Disney programming block for preschoolers.  It premiers on September 6 at 10am ET/PT. So set your TIVO, program your VCR, or plan to tune in.