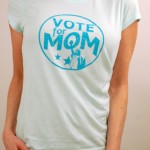 Presidential elections are a great way to teach your children about the democratic process and U.S. history. The first presidential election I remember was in 1984. I had just turned six, and my parents brought my brother and me with them to the polls. My father let me help him pull the lever to cast his vote, which I found really exciting.

Looking back, I’m impressed with the way my parents involved us in the electoral process. While I knew who my parents were voting for, there was no rancor and no badmouthing of the other candidate. What I felt from them was pride in America. We lived in Philadelphia at the time, and my parents had taken me to see Independence National Park. They’d told me about how brave Americans had fought and died to give us the right to vote and to pick our own leaders. And they told me how lucky we were to live in a democracy because so many people worldwide didn’t have the right to vote.

In that spirit, Mamanista’s 2008 Election Guide features bipartisan products that celebrate our right to vote. 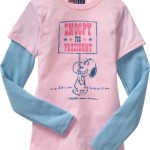 the hip “Vote for Mom” tee (pictured above) by PeaceLoveMom in the October issue of Parents Magazine. It normally sells for $40, but you can get 25% off using coupon code “Vote08” (coupon valid from now-election day). Available at www.peacelovemom.com. 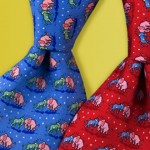 and tote bags at CafePress. Or you can design your own for a one-of-a-kind look.

Dad can show his sense of humor about the election by sporting the new “Poll Position” tie by Bird Dog Bay. Dad’s color choice (red or blue) is a subtle way to show his political leanings. Or if he wants to keep people guessing, he can pick a bipartisan gold. Republicans and Democrats may be butting heads, but they won’t debate that this tie is a stylish winner. Like all Bird Dog Bay ties, the “Poll Position” tie is 100% silk, handmade and handprinted in the USA. Available online for $75 at www.birddogbay.com. 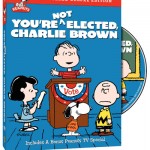 might not be as famous as It’s the Great Pumpkin, Charlie Brown

, but this classic Peanuts cartoon is every bit as charming. This TV special originally premiered in 1972, and it is a reflection of a more innocent time in American politics before events like Watergate and the Clinton impeachment divided a nation. Lucy takes an opinion poll to determine that Charlie Brown is far too unpopular to win the election for student body president, so the gang persuades Linus to run instead. Lucy and Charlie manage the campaign, but Linus might ruin his chances when he starts talking about the Great Pumpkin.

is the rare picture book that parents will enjoy as much as the kiddos. Duck gets tired of working on the farm, so he wins an election to replace the farmer. But farming isn’t as easy as he thought, so he runs for governor, then president. A funny satire of the political process that is sort-of educational (voter registration, running a campaign, voting) without being dry and boring. Keep an eye out for Duck’s election signs (“Duck, make us proud again”) and sly references to past presidents like JFK, Clinton, Nixon and more.

Woodrow for President: A Tail of Voting, Campaigns, and Elections

explains each step of the electoral process to children with rhymes and illustrations of Woodrow Washingtail the Mouse’s bid for the presidency. And if your children are curious about what exactly a President does, check out the companion book- Woodrow, the White House Mouse

Cheer on your candidate during an election night party. You can find Democrat and Republican paper plates, napkins and other party supplies at 4FunParties.com

Support your candidate by buying delicious cookies and cupcakes! Mrs. Beasley’s Cookies and Cupcakes is pitting Obama against McCain. To “vote” for your candidate, buy cookies or cupcakes with photos of McCain, Palin, Obama or Biden. Every purchase counts as a vote in their poll.

WIN A TIE BY BIRD DOG BAY: For a chance to win a “Polling Position” tie by Bird Dog Bay ($75), cast your vote by leaving a comment on this post by 11:59pmEST on November 3, 2008 letting us know whether you want the Red (Republican), Blue (Democrat) or Gold (Undecided) tie. But please keep your comments as classy as this beautiful 100% silk tie and respect our desire to keep our election guide bipartisan and civil.