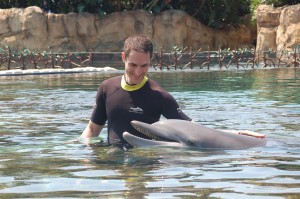 Orlando’s reputation as a family fun destination is well-deserved, but there are plenty of attractions besides Disney.

Personally, I love theme parks. I’ve visited all the Disney Parks, SeaWorld, Busch Gardens, Universal Studios numerous times before baby was born. (I used to work at Expedia and Travelocity, so I got industry deals and traveled a lot back in those pre-baby days.)

If you’re not a theme park kind-of-person, you can visit other Orlando attractions like Discovery Cove or the Kennedy Space Center. Or you can spend a whole weekend relaxing by the pool, shopping at nearby outlet centers, and dining/ partying at Universal Studios City Walk, Downtown Disney or Pleasure Island.

When I’m traveling with my family, I like to stay at the Peabody Orlando Hotel. Even though it’s a short drive from Disney World, the atmosphere at the 4-star Peabody is relaxed and sophisticated. The rooms are well maintained– no stains on the carpets and bedspreads like in many of the “family” hotels in town. And even though it is a 4-star hotel, you can find amazing deals during offpeak times since it is primarily marketed to business travels. The Peabody is known for the famous Peabody Ducks that parade through the hotel daily at 11am to take their daily dip in the lobby fountain while guests enjoy high tea service.

The highlight of a visit to Discovery Cove is the 30 minute Dolphin Experience. In a small group, you get the chance to interact with and pet a friendly dolphin. And every guest (age 6+) can interact individually with the dolphins by taking a dorsal fin tow ride back to shore. And there are photographers on hand to take great pics of your entire dolphin experience. (That’s a picture of my hubby petting the dolphin above!)

After our dolphin experience, we interacted with the gentle rays and then went snorkeling in the artificial coral reef which was stocked with a wide variety of fish. (Discovery Cove also provides prescription dive masks, which is great if you wear glasses like I do.)  Afterwards, we hung out in the large resort pool (complete with artificial beach!), floated around the lazy river and fed tropical birds in the aviary.

Since Discovery Cove is all-inclusive, all of our meals (breakfast and lunch) as well as snacks and beverages were included. Since Amheiser Busch owns Discovery Cove, even alcoholic beverages were included. But given the warm weather, we stuck to water and the complimentary fruit smoothies. The quality of the food was much better than you would expect. Lunch even included several vegetarian options as well as healthy salads.

If you are looking for an educational and fun family vacation idea, check out www.discoverycove.com.

Southwest Airlines Vacations. Great rates on Florida vacation packages – Soak up the sun in Orlando or the beaches.