Video Games aren’t for everyone. Candace makes a big effort to engage in only “unplugged” play. Her little girl watches almost no tv, and I highly doubt she’ll be playing video games anytime soon. While I embrace the unplugged play philosophy in theory, I see a lot of value in video games as well.

I have many happy memories of playing games on the original Atari system with my brother, and I’ve made my living in the dot com world. So Candace was amused- but probably not shocked since she’s known me so long- to discover that my infant son has his own Mii (or avatar) on the Nintendo Wii and that I’d found a way to combine babywearing with video gaming.

The Nintendo Wii is the ideal game system because it inspires activity and interaction with other people rather than sedentary individual play. My husband and I play Wii tennis and Wii boxing together on rainy afternoons, and I’ve found the Wii Fit to be a great way to lose the baby weight.

The Wii Fit guides you through aerobic activities, yoga poses, strength training and balance games. And it even weighs you and tracks your BMI. My son enjoys the balance games. Strapped into his front carrier, he giggles while mommy and daddy “snowboard” or “ski” while holding his little hands. Wearing baby makes the balance games much more challenging, and it gives mom a chance to relax a little bit.

A friend of mine loves her Wii because playing Wii Sports with her middle school-aged son for 15-30 minutes after school gives them a chance to talk about his day and to work up a sweat together. (Really…you’d be surprised at how much some Wii games get you moving!) She’s improved her relationship with her son, become a pro at Wii tennis and even burned some calories!

Wii Sports (which comes with the console) and Wii Fit are my favorite Wii games because they are fun and get you moving. But there are many other great family games for the Wii. I received some new family-friendly Wii games from EA to test.

.  In fact, you can order as late as December 22nd and get free two-day shipping on any size order!

for Wii Review (ages 10+):  My son is still a baby, but my friends with older children report that their kids (especially the boys) bug them incessantly for “shooting”video games. For moms uncomfortable with all the blood, gore and violence in many video games, the Nerf-N-Strike is a good compromise. Kids get a fast-paced action game, and moms get a non-violent game where robots, blocks and cardboard cutouts are the targets instead of zombies or enemy soldiers.

Nerf-N-Strike comes bundled with an orange and yellow plastic Nerf Switch Shot EX-2 Blaster that functions as a real-life Nerf weapon and a Wii remote holder. In the game, players can use over 25 different kinds of “digital” Nerf blasters that feature varying rates of fire. Adults used to the more violent shooter games may get bored easily, but this game is just the right level for kids. (Available for $57.99 on  Amazon.) 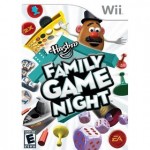 Review: Even if your kids would rather play videogames and watch TV than hang out with you, you can still have a semi old-fashioned family game night. There’s no need to drag your board games out of the closet or to spend time setting up the games or locating missing pieces….and absolutely zero clean-up required.

At $39.99, this game is cheaper than buying all the individual boardgames….and it’s a fun way to bring the family together.

for Wii Review:  I remember Monopoly games from my childhood that seemed neverending. Monopoly is one of the best board games in my opinion, but parents don’t always have time for an hours-long game.

Now 1-4 players can play an entire game of Monopoly in just 30 minutes on the Wii in “Get Rich Quick” mode, and you won’t have to worry about your toddler sticking one of the game pieces up his nose either. (This actually happened to a friend’s child! I’ll never look at that little dog the same way again.)

I’m still partial to my old-fashioned classic Monopoly board game, but I enjoyed this new twist on the game as well. 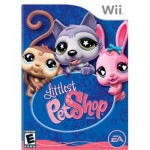 for Wii Review: Little girls (and boys) who love the Littlest Pet Shop products can collect and play with 32 of the most popular pets. You can name, dress, and play with your pets as well as play games to earn points.

If your child likes Webkinz, Club Penguin or Bella Sara, this is an ideal game. At $39.99, it’s cheaper than buying lots of Littlest Pet Shop toys and Webkinz or a year-long Club Penguin membership.