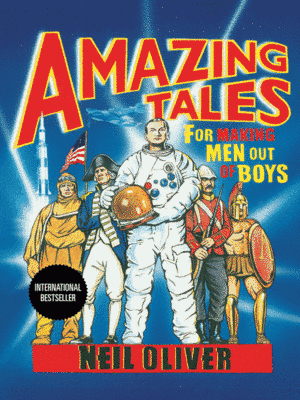 Our boys, we are told, are in crisis. Whether or not this is a myth, there’s a perception that today’s civilized is just bit, well, too nice for a growing boy. And where are all the role models of manly virtues? A new book, Amazing Tales for Making Men Out of Boys, hopes to fill this gap with examples and stories of manly men who exhibited great strength and courage.

Unabashedly old fashioned, Amazing Tales emphasizes tales of derring-do in which physical prowess and steadfastness in the face of danger take center stage.  Written in the style of dime novels of years gone by, the book mixes hyperbole with plain, folksy expressions to convey the message that true heroes are both ordinary and extraordinary. The video advertisement gives a good feel for the tone. This over the top voice is in the service of the idea that any boy can become a paragon of manliness, if he only works hard enough.

Most of the tales focus on a moment when a man has a choice to either live comfortably or, at great risk to himself, make his mark on the world. In many of the stories, the hero is willing to die to defend his people and his cause.

Although the book is clear from the start that the virtues under discussion are the more martial and adventurous side of manhood, parents will want to read through the book before giving it to younger children to make sure the amount of war and gore is consistent with their own value system.  Special books just for boys may be a great idea but the language in this book sometimes turns bullying, going so far as to imply that perhaps boys who are not interested in the more vigorous arts of manhood might just be girls. As a girl who spent hours perfecting her knife throw just in case she should find herself stranded or shipwrecked, I’m not sure boys have a monopoly on these activities.

And although the author may forgive men of adventure and bravery their flaws in their personal relationships, going so far as to explain that this is just part of their intensity, I believe that treating friends, women, elders, and children with respect is an essential part of any definition of manhood.  Whether we’re talking warriors or scientists, let’s call a cad a cad if the name fits.

Despite these occasional missteps, many boys will grab flashlights and pocket knives and spend long hours reading this book  under tents and trees. In these Amazing Tales they will find some stories of lives led fully, bravely, and admirably.

Children do learn through stories. They discover their place in a society that is bigger than their world and they safely rehearse their parts, trying on different characters. Knowing what John Paul Jones did when his ship was toe to toe with a bigger vessel just may give a boy the courage to shout out, “I have not yet begun to fight” when something he holds dear is at stake. Maybe these examples will help them find strength for whatever challenges are ahead. And possibly, when they reflect on their journeys, they will find that these tales helped them become men.