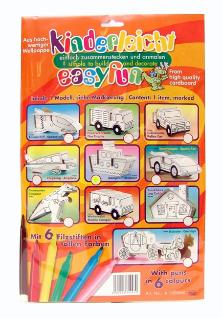 My little one just turned three and we’re still trying to hold the line on the birthday party escalation.  Since she has a some friends, now, we had a few girls over for ice cream cake and crafts.

You can choose from either a mixed pack or a pack of toys that matches your theme, including Ocean Steamship, Spaceship, Dinosaur, Horse & Carriage, Airplane, Race Car, Fire Engine, Camper Van, House.

We got a mixed pack and each kid selected one to make and take home. My daughter chose a horse and carriage.

The little girls at our party (ages 3-4) needed some help with assembly but then had a great time coloring in their toys with the included, non-toxic markers.  I also gave them some stickers and glitter glue (not included) to add to their creations.  My daughter loves crafts and always wants to play with her project afterward–and now she can.

Each kid was excited to take home a toy they had made themselves.  And the moms were happy that these eco-friendly, recyclable toys won’t add to the landfill.

I really like the mixed pack because how else can the princess take a carriage to the drag race and then rocket to a distant plant to fight dinosaurs and live happily ever after in her camper?