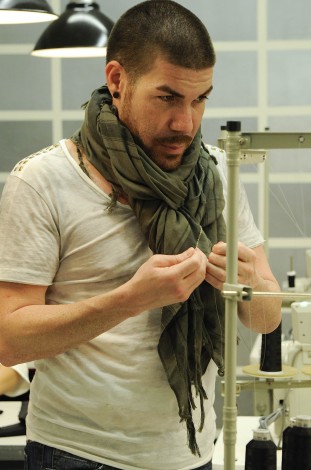 Oh, Casanova, how I will miss you and your antics! Casanova was one of the most inconsistent designers on this season of Project Runway.  He veered wildly from looks that Michael Kors called “Dubai Pole Dancer” to looks the judges thought were more suited for a 70 year-old.  Between the language barrier, a methodical style not suited to timed challenges, and an inability or unwillingness to alter his aesthetic to suit the judges’ tastes, we knew Casanova was not going to make it to the final three.

Still, the man could sew a pair of pants.

And many of his looks (pole dancer costume excepted), look like pieces my very beautiful, very thin, very chic, mom would have worn in the Catskills in the ’80s.  So, it was especially surprising to see a man who lives in a prime vacation spot leave during the resort wear challenge for an outfit that looked like a St. Tropez tanning lotion advertisement.  Granted it was not the most modern of looks but it certainly did not appear to be the losing look from my seat! 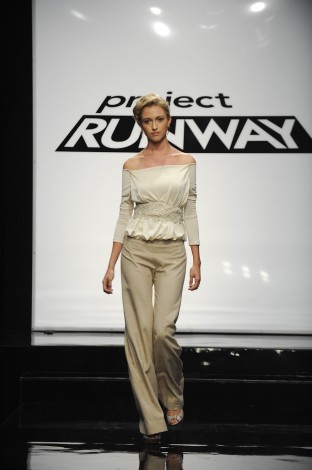 Below are excerpts from the beginning of the interview about Casanova’s struggle with the challenges and the judges’ critiques.  Listen to the entire interview to find out about how Casanova’s abuelita of steel inspired his metallic make-up for his Fashion Week collection, what he thinks of Tim Gunn, his auf’ing, his new Casanova NYC label, and who he thinks will win it all (Gretchen or Ivy!). (Part 1 is uploaded…I’m still working on Part 2!)

You can find more Project Runway videos, images, blogs, and news at myLifetime: Project Runway and don’t forget to tune in Thursdays (TONIGHT!) at 9 PM ET/PT on Lifetime.

Definitely maybe I can say both. For sure I have many struggles about language barriers. Probably most of them were at the beginning of the show. But I have to say also that I have to recognize that for the fact that I had just been in New York, maybe just seven months, right now and at the point that I get into the show being like five…I have to say that maybe I never connected to the fashion statement of the city or maybe the market or the trends. I thought probably was the same thing as in my country, Puerto Rico. Because I have been there thirty three years of my life and because it is too close to New York I was thinking will be the same but maybe it is not…maybe I was wrong.

Interviewer 1: Do you feel that your style and your design aesthetic is based on your upbringing and having lived in Puerto Rico or do you feel it is entirely different?

No, no, no…I have to say that I have to look forward and see how many changes about my aesthetic…I can change it in my future. But right now I have to say that of course my aesthetic is related about my country and that’s the reason that I think that they don’t like my aesthetic so much. Because I have been so confident with all my designs and when they say that they don’t like it or they think that it is for old girls…I was like, ‘for real?’ Because sometimes I can recognize that I do something…not too much…and I can think ‘probably they don’t like it’ but most of my looks I was very confident about. Their critiques have tried me so much. And at some points I get lost during the competition I was thinking ‘Oh, my God, maybe I should not be a fashion designer because nobody likes nothing about me.’ So, I was very confused. Several times during the competition I get confused. But it is a question about taste and let’s see what happened.
Candace of Mamanista.com: You said that most of the looks you felt very comfortable, confident about. But were there any looks, looking back on it now, if you were to adjust to the judges’ critiques, knowing what you do now, is there one look that you might redesign and in what way would you redesign it to make it more competitive?

Casanova: Probably the first one. The theme of the first design…I have to say that the first design I would totally agree with Nina Garcia when she told me that it is a cliché. I totally agree. My issue was…I get the instruction like I should use most of the fabric of the old garment in the new one. But then I realize that maybe if I use a little piece of the fabric, I would be okay. Because the winning look have just two pieces on the shoulder. I would do some very nice outfit and then I would put some pieces of the fabric of Ivy’s blouse. And because I was pretty uncomfortable with the first design. I never considered it was a design that looked like a Dubai pole dancer but it was not my best. I was just trying to follow the instructions as much as I can.
Candace of Mamanista.com: You are a couture designer, correct? Do you think there is a place for that sort of time-intensive, usually very expensive design on the show or does a couture designer really have to change their strategy when they are on the show?

Casanova: Probably, probably you should. The other mistake that I have to recognize is that I never followed the show before and when I get in the show I have been very focused about the construction. And the show if you see, the show is not Project Couture, it is Project Runway. So it is into the Runway, it is not about into the construction. And I’ve just been very focused, focused, focused…in perfect execution, lining…the judges never take a look inside the garment to see the construction. So probably I don’t get more risqué or more exciting because for the time that you have to make the clothes I was thinking to make a simple design with very nice construction but at the end of the challenge I realized maybe I could do something very extraordinary without boning, without lining because they don’t care much…that was my experience…because they don’t care much about the execution. It is just the look. If it looks good on the runway, you will be fine. So, it is my fault. If I had been following the show before, I wouldn’t get as lost as I was on the show.