The word DISNEY is synonymous with magic, and after growing up with the classics (Sleeping Beauty, The Little Mermaid, the list goes on…) it’s comforting to know that Disney hasn’t lost its touch. 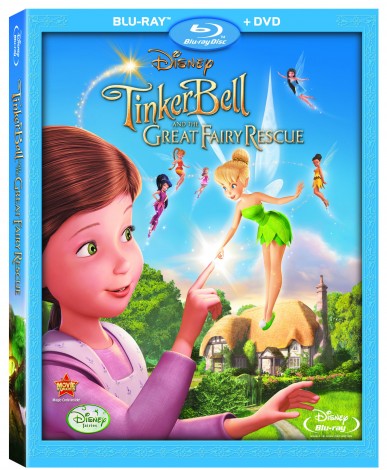 A group of us were honored with the chance to preview Tinker Bell and the Great Fairy Rescue, the third film in the Tinker Bell series set to hit stores September 21, 2010.

There we were, a group of grown women sitting in the Frank G. Wells theatre of the Disney studios in Hollywood, CA, relishing in the history of the building and imagining the Disney royalty that sat in the same room. See, this part of the studio lot is completely closed off to the public…let the magic begin!

As the lights dimmed, I suddenly felt like I was 9 years old again. The film instantly opens with a beautiful view of a summer landscape and fairies making the flowers bloom, painting butterflies, and marking bees with their black stripes.

The story follows Tinker Bell’s very first meeting with a human. That’s right, way before Wendy and the Lost Boys. Her human friend is an adorable little girl named Lizzy, with a steadfast belief in the power of pixie dust and the magical land of fairies. Trouble is, the moment Lizzy sees Tinker Bell, she takes her back to her house in hopes of keeping Tink as a new friend. Tink’s best friends then embark on a daring rescue mission to bring Tinker Bell back home to Pixie Hollow. 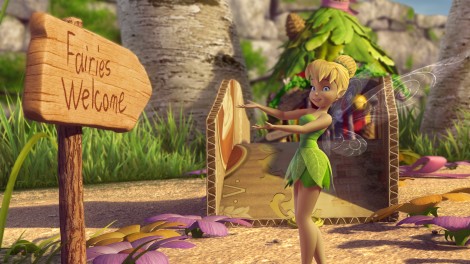 Lizzy designs a small house to catch fairies in and Tinker Bell falls right into the trap.

The film itself was very entertaining and easy to follow. I hadn’t seen the first two installments and knew exactly what was going on, and for the majority of those around me who had seen the previous films, the continuation of Tinker Bell’s story was a double delight. The characters were truly compelling and created so vividly, it honestly felt like they were real, developed people. Lizzy’s bond with her father grows throughout the story along with Tinker Bell’s adventure. It was nice to see a portrayal of a single dad/daughter relationship and the lessons both learned along the way.

The wonder of Disney to me is that their characters are rarely one-dimensional. It’s refreshing to see that even animated characters have multiple emotions and make mistakes, which is really comforting to kids. You don’t have to be perfect all the time! The innocence of Tinker Bell and Lizzy’s sweet and tender friendship is sure to delight kids AND adults of all ages as well. You’ll love seeing the kids squeal over Lizzy’s first attempt at flying all around her room (you’ll squeal too, trust me). Truly sensational.

In the end, as we all discreetly ransacked our purses for tissues, what struck me the most was how in every frame you felt as though you were inside a moving painting. Combine that with the sparkling trails fairies leave behind as they move, it was a truly gorgeous film to watch.

The following day we had another rare treat and met with the filmmakers themselves.

Here are some interesting tidbits and factoids we picked up along the way:

From Mindy Johnson, Disney’s resident historian: Tinker Bell is a fictional character from British playwright Sir James M. Barrie’s original play “Peter Pan” where she was portrayed as a flying light beaming from offstage. She actually had a different name when the play was first written, but with the continued use of a “tinkling bell” to signal her arrival on stage, Barrie created the name Tinker Bell.

From Ritsuko Notani, Character Designer: Tinker Bell’s character and outfit were remodeled several times, using the original Tink from Disney’s Peter Pan as a constant template. They never wanted to stray too far from the original character but knew that with the latest technology (and the fact that Tink isn’t quite so jealous or mean, but still gutsy and loyal) she needed to be freshened up. The character of Lizzy was inspired by a young Natalie Wood in Miracle on 34th Street with fashions modeled after Disney’s Pollyanna. 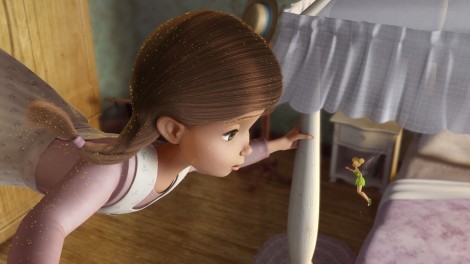 From Bradley Raymond, the film’s Director: The live action sequences and Tinker Bell’s movements were meticulously designed from various angles and poses and compared to the original 1953 film drawings of Marc Davis, Tinker Bell’s chief animator. Mr. Raymond also showed us even grown men fall under the Disney spell; his passion for the film and respect for Disney made all of us grown women instantly feel better about sobbing during the film the night before.

Since there was so much to see and do, this is just Part 1 of the “Think Tink” posts…watch out for more and be sure to catch Tinker Bell and the Great Fairy Rescue on Blu-Ray and DVD September 21! 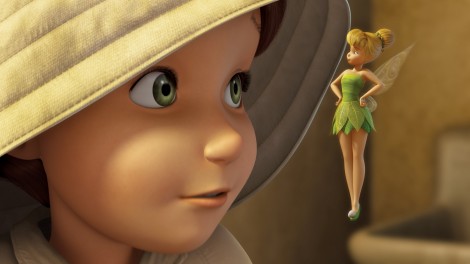 Tinker Bell preps her new friend Lizzy for another adventure

Disclosure: Disney Home Entertainment paid for my travel expenses to this event.

Previous Post
Back-to-School Shopping at Marshalls
Next Post
Want to Win a New Computer AND Help Classrooms Across the Nation???