Menu
Search
Home > Savvy Gifts > There’s a Party in My (NY) City and Yo Gabba Gabba has a Discount Code for You! 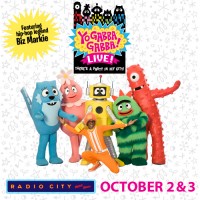 We don’t watch a lot of children’s television in our house but I have to admit that even I know about Yo Gabba Gabba. Heck, even my child-free friends know Yo Gabba Gabba.

Fresh off a triumphant sold-out tour debut, a headlining performance at The White House, a critically-acclaimed, chart-topping album, and an appearance at Coachella that garnered rave reviews from spectators and media alike, DJ Lance Rock and the cast of YO GABBA GABBA! are back with YO GABBA GABBA! LIVE!: THERE’S A PARTY IN MY CITY! to play to enthusiastic fans at Radio City Music Hall on Saturday, October 2 and Sunday, October 3.

Joining the characters on stage will be hip-hop legend Biz Markie to teach kids how to beat box with “Biz’s Beat of the Day.” Special guests will join the party on stage for the Super Music Friends Show and Dancey Dance segments.

The state-of-the-art production features music, singing, dancing and animation. The show is an interactive experience that offers audience members of all ages the opportunity to witness their favorite characters come to life.

Yo Gabba Gabba! infuses retro-style and beat-driven music to teach simple life lessons through music. The series stars DJ Lance Rock (Lance Robertson) and a cast of colorful characters, including: Brobee, the little green one, Foofa, the pink flower bubble, Muno, the red Cyclops, Toodee, the blue cat-dragon and Plex, the yellow robot.

Our fabulous writer, Megan, will be heading to Yo Gabba Gabba and giving us the special report of the performance.  If you will be joining her at Madison Square Garden, use coupon code 15PLEX to get 15% off select seats!