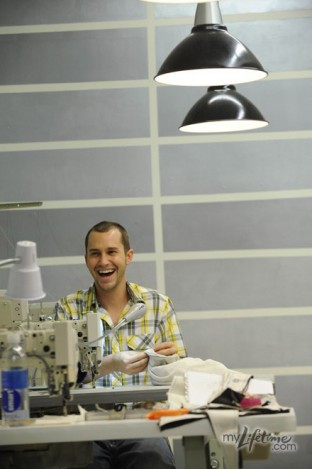 Lifetime gave me the opportunity to chat with Christopher Collins, the most recently auf’d Project Runway contestant.

How ironic that Christopher Collins, perhaps one of the sweetest, most down-to-earth, mellow, well-adjusted reality show contestant in the whole sordid history of the genre got the auf on what is perhaps the most over-the-top nasty Project Runway episode ever.  And how sad that it followed the beautiful episode where Mondo shared how he continues to embrace life and translate his challenges, including his until-recently secret HIV-positive status, into joyful fashion.

And speaking of role models, Christopher said that he has been working with organizations to give back to the community.  I think that if any gay (or even straight) teen feels hopeless, looking at Christopher and his professional success and his personal relationships will definitely show them that life does get better! 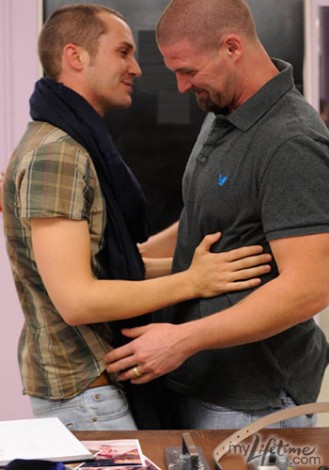 Before I get to Christopher, I just wanted to say congratulations to Andy!  I adored this hoodie and was so excited that he won because I wanted to buy it on Amazon.

Unfortunately, New Balance altered the design for Heidi’s line (HKNB) so much.  I expected them to have to compromise on the fabric and to change the proportions but I don’t know why they changed the keyhole into a chevron.  I’ve heard some online rumblings that Andy’s design is too close to this Lululemon hoodie but frankly I think his is different in its proportions, placement, and width of the stripes; not to mention the omega / keyhole / “that girl” logo is ubiquitous enough that you can no more copyright it than Gretchen can the color burgundy.

Anyway, if you feel like you want to drop $160 on Andy’s modified hoodie, you can buy it here on Heidi Klum’s HKNB line on Amazon.

I felt bad asking Christopher about the Ivy-drama but the pot-stirring character assassin was Christopher’s partner in this challenge.  Christopher did not witness the alleged cheating, the sole evidence for which seems to be sticky tape in the women’s bathroom, but he did ask Michael C. point blank if he cheated and trusts Michael’s response that he did not.  Completely in character for what we’ve seen of Christopher, he managed to both defend Ivy’s personality as “kind,” if “direct”, while asserting that Michael is very honest.

On the call, Christopher said that he began to feel like Project Runway was not the right show for him because he would try to follow the judges critiques and have more drama in his design, only to be told on the next episode to edit and keep things more simple.  Although Christopher never won a challenge on the show, he believed that some of his designs were real winners so I asked him which were his favorites.

He immediately identified the “high fashion ” L’Oreal challenge but I just cannot get on board with this look from Christopher. 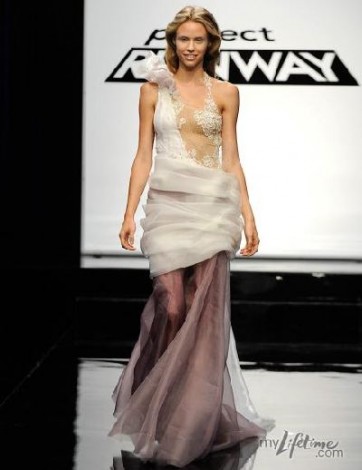 Honestly? It looks like an ice-skater threw on a two-sizes-too-big Marchesa gown for her victory party and then, after too many drinks, half the gown fell off.  Christopher’s sketch had a lot of the glamour and romance he was going for but the actual gown just seemed proportioned wrong.

But then Christopher added one of my personal favorites, the Philip Treacy hat challenge, which very surprisingly to me and to the other designers put Christopher in the bottom for the judging: 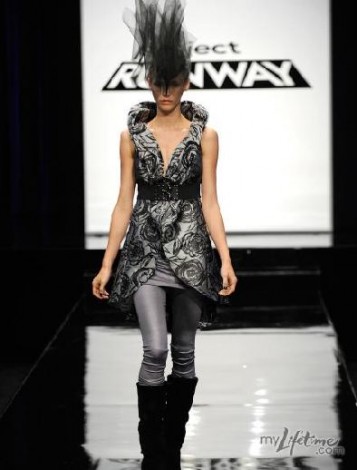 Granted, the styling on this was too “heavy,” but, as Christopher pointed out, this was a very chic, wearable jacket that could be worn with a dress, jeans, slacks, pretty much anything.  Not to mention, I could wear this in my current size or when I was much smaller and younger.  My mother, who was watching this episode with me, and I both wanted this jacket.

Christopher’s final pick for his top design was the party store challenge: 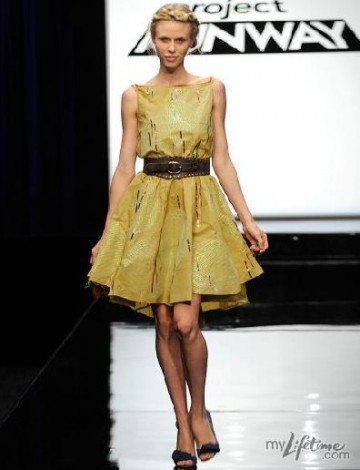 Which is, admittedly, a very cute dress.  Christopher believed that he demonstrated a lot of resourcefulness creating a fabric out of the crazy materials available and developing the color scheme.

On the Project Runway site, Christopher is quoted as saying, “I always design something beautiful and wearable, yet dreamy”. While I see this in his runway collection for New York Fashion Week, I felt that this more ethereal lightness was missing even in his more successful pieces during the show. I asked him about this and he pointed to the very different process he normally employs when designing. Usually, Christopher is inspired by something he sees or something even that comes to him in his dream. He takes the time to search for the right fabric and then starts to work with it. If the design isn’t materializing in the way he had hoped, he takes a break and comes back to it, rather than fighting it. This is very different from the “make it work” ethic of the show that gives designers specific parameters, 20 minutes to sketch, a short race through Mood to find the best possible, if not ideal fabric, and then a day to construct their finished piece and send it down the runway. 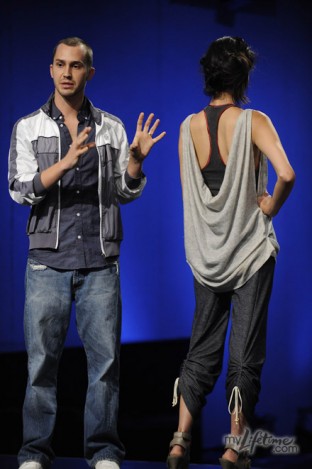 Christopher left the show during the activewear episode. Several times throughout the conversation, Christopher mentioned that he was thrown by working in a new category (activewear when he is more of a sportswear designer). That combined with trying to find a way to blend his aesthetic into Heidi’s line left him unsure of himself. Guest judge Norma Kamali offered Christopher a helpful piece of advice: “She said, ‘You look like you are a very fit, health-conscious person. I don’t know why you didn’t look in the mirror for your inspiration for this collection.’ Which makes a lot of sense since I am an activewear customer.” 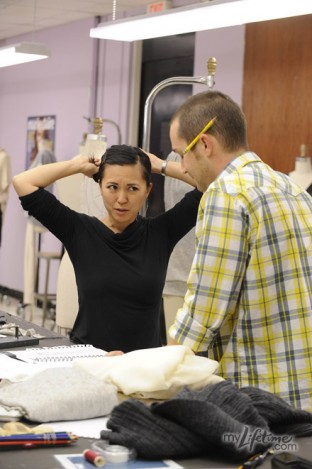 Given the risk of Christopher turning out a well-constructed but unexciting garment, I was hoping he would pick a partner that would encourage him to add some drama to the pieces.  To my dismay, he picked Ivy, who also drew criticism for her well-sewn but dull pieces during several judging sessions.  When I questioned Christopher about his decision he said that he is “not a person who spends a lot of time looking back, focusing on regrets.”  He chose Ivy because of the logistical demands of producing another two pieces in a short amount of time and he knew he could “trust her to work quickly and sew well” based on his sketches.  However, he acknowledged that maybe if he had considered that he was on a reality show instead of the logistical concerns he might have chosen someone who could “inject some panache into [his] line, like A.J.” 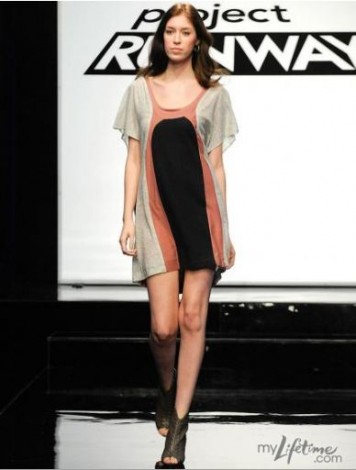 I asked Christopher specifically about the color-blocked dress and his choice to place the navy (which I had seen as black while watching the show) in the center. Generally, I expect the darker colors to be placed on the outside so that the garment is more slimming. With the dark fabric at the center, the dress looked to me like a gaping, depressing black hole. Christopher responded that he was trying to call back to the color-blocking and lines on Heidi’s collection and that he saw it as a sunset, with the more vivid colors in the center.

Remember you can watch Project Runway on Lifetime on Thursdays, 9 ET/PT.