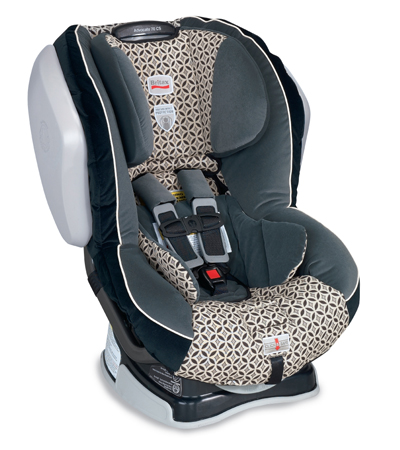 There are a lot of safety issues about which I try to stay informed…but there is one issue about which I am a true zealot: car seat safety.

For children between the ages of 2 and 14, motor vehicle accidents are the leading cause of death. According to the CDC, “child safety seats reduce the risk of death in passenger cars by 71% for infants, and by 54% for toddlers ages 1 to 4 years.” That makes proper car seat use our front-line of defense against unnecessary injury and death for our children.

Britax is an Industry Leader in Child Passenger Safety

At the beginning of June, Britax invited me and a handful of other bloggers down to their factory to learn more about their product line. I was impressed by how Britax not only produces car seats that exceed all existing standards and is constantly striving to improve but also how concerned Britax is with child passenger safety.  In fact, one of their primary questions to us was, “How can we convince parents to use top tether?”

As part of their ongoing commitment to child passenger safety, Britax has released the 70-series convertible car seats.

My son has been using Britax seats since he was out of his newborn carrier, including the Boulevard CS, a seat that may have helped save him from serious injury when we had a car accident last year.  Up until this fall, he was in a Britax Advocate CS. So, I was very eager to try out the Britax Advocate 70 CS.

While Britax believes strongly in convenience (the safest car seat is the one you will use properly and consistently), the 70 series is no mere cosmetic revamp.

Essentially, the innovations Britax has made significantly reduce head-extrusion in the event of a crash.  What that means is the child’s head is less likely to hit the front seat of the car, drastically reducing the risk of serious injury or death.  According to testing, Britax’s 70 series is best-in-class for head protection. 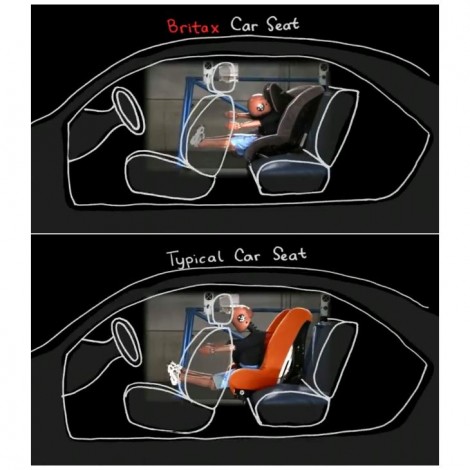 A quick rundown on some of the new technology Britax is offering in the 70-series:

The Advocate 70 CS still has all of the features that make this the right car seat for my family. The high weight ceilings are an important factor in extending the life of the seat: 5-40 pounds rear-facing and up to 70 pounds forward facing.  This means parents can keep children rear-facing longer, in a five-point harness longer, and therefore safer.

Ease of Use
Two ease-of-use features I love with the Advocate are the quick-adjust harness, which allows me to adjust the height of the harness without re-threading, and the “Click & Safe Snug Harness Indicator”, which gives an audible click when the harness has the right amount of tension. This is especially useful when other family members take my son out and think the harness is “too tight”. Even my son knows that we need to “hear the click” to know he’s safe.

My husband, our resident car seat installer, has also told me that the Britax seats are relatively easy to install.  And Britax has videos to help with proper installation.

The video really says it all:

The key here is preventing head injury.  There are three ways to do this: design better seats; make it easier for care givers to install those seats; and to educate care givers about the importance of proper use of the seats, including the use of the tether. Britax told us about their efforts on all fronts.

WANT IT: Find the Britax Advocate 70 CS ($370) everywhere Britax is sold, including Amazon, Baby Earth, The Land of Nod, and more.

WIN IT: Britax is giving away one Britax Advocate 70 CS ($370), pattern subject to availability, to a lucky Mamanista reader.

To enter, leave a separate comment for each method of entry:

Disclosure: My daughter’s first convertible car seat, purchased with my own money, was a Britax. Since then, I have worked with Britax on several reviews of car seats on this and other sites. As of June 2010, I am a member of the Britax Blogger Advisory Board. Britax paid my travel expenses so that I could tour the factory in June 2010 but I do not receive any monetary compensation from Britax. My opinions are always my own.