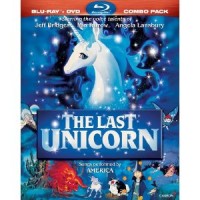 When your all-time favorite childhood movies start having 25th Anniversaries, it is a little like hearing your high school prom song on the oldies station.

When I was eight, The Last Unicorn drew me into a magical world of wizards, heroes, and, of course, unicorns. I can still remember watching it during camp movie nights.  I was curious to see how the movie held up over time.

This high-definition, wide-screen release corrects the audio and visual problems of previous versions and was a joy to watch.

Older viewers will have fun identifying the voice talents, including  Jeff Bridge, Mia Farrow, Angela Lansbury, and Rene Auberjonois.  And, the mystical soundtrack performed by America is an enjoyable blast from the past. 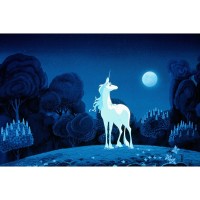 The lush animation is simply breathtaking in its fantastical detail and the story is a refreshing counterpoint to the now-typical princess narrative.  Although the unicorn is a wide-eyed naif, she draws upon a core of inner strength and the support of a motley crew of friends to save her entire species.  Turning convention on its head, the prince’s most heroic act is to die.  Through the prince’s sacrifice, he inspires the unicorn to stand and fight the horrific red bull.

Although the unicorn’s love revives Lir, the pair do not marry and ride off into the sunset. The unicorn does not ask to remain human but rather chooses to go home.  She does so knowing her homecoming will not be an easy one because she alone of all unicorns has been human and has known regret. 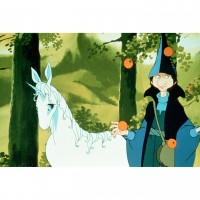 To fall in love is a beautiful thing but it will mean nothing if the unicorn betrays her true nature.

As the wizard, Schmendrick, says earlier in the movie, ” There are no happy endings, because nothing ends.”

Watching again with my four and a half year old daughter, I was taken with how quietly sophisticated an animated fantasy feature can be.  The formula for children’s movies today seems to be faced-paced gags with a few borderline inappropriate “adult” one-liners thrown in–the equivalent of cinematic junk food.  Before viewing, I was nostalgic for the film.  Now I am nostalgic for a time when eight year olds still got excited about animated releases and family films meant movies for the whole family.