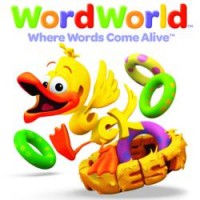 While I am a great believer in “unplugged play” and limited screen-time for young children, I recognize that technology and even television shows can enhance learning.

DVDs. These shows helped him learn his upper and lowercase letters and phonics through catchy songs, fun animated characters and interesting stories.

WordWorld sparked his interest in sounding out and building words. On WordWorld, all of the characters are designed from the letters that make up their names. In every episode, they must build the right word to solve challenges. The characters build the word letter by letter and sound by sound during the “Build a Word” song.

Since we’re huge WordWorld fans, we were pleased to discover that we could take the fun on-the-go with interactive eBooks and educational games for the iPad. We had the opportunity to test WordWorld’s “Build A Word”app and five WordWorld eBooks.

In the “Build A Word” app, letters float across the screen. Children need to catch the right letter and then place it in the outline on the screen to create words like cat, dog, sheep, ant, bug, duck, pig, bear and cow. The words then transform into the animals– much to the delight of young children.

While I enjoy playing the “Build a Word” game with my son, I particularly adore the interactive eBooks. My son’s favorite eBook is “The Big Race” because it gives him the chance to build the words bike, scooter, truck, car and boat. When we’re reading regular books, he now rejoices in pointing out the words he’s learned from the eBooks and Build A Word game whenever we see them.

WordWorld’s mobile apps for iPad, iPhone and iPod Touch are available in the App Store for 99 cents each. Or you can try the eBooks free online at WordWorld.com.

Enter the “Train Escapade Contest” on Facebook for a chance to win 5 WordWorld DVDs, including “Train Escapade” which releases on May 3rd. www.facebook.com/wordworld