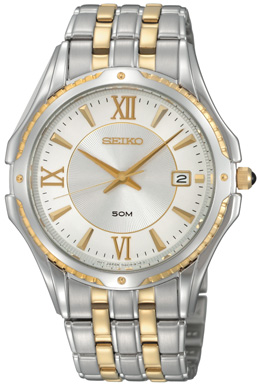 My husband has never been one to pay close attention to accessorizing.  He is the type of guy why will stride purposefully into a store for his semiannual shopping trip, select the same brands and sizes of various wardrobe staples he has always purchased, and head to the cash register in under ten minutes.  I remember gasping in shock the first time I accompanied him, “Aren’t you going to try those on?”

He wears the same watch he purchased during his military active duty service–a plastic, heavy-duty, waterproof, shock-resistant time piece.  It is, shall we say, very functional.  But I cringe a little whenever he pairs it with nice weekend casual outfits or a suit on his way to prosecute a case in court or even with a tuxedo in the rare event we go out somewhere that calls for formalwear.

On more than one occasion, I’ve looked him over approvingly and then halted at his wrist and asked, “Wouldn’t you like a nicer watch?”

So, I was thrilled when Seiko offered me a a Le Grand Sport watch to gift him for Father’s Day.

As a traditionalist and a conservative dresser, he likes the Roman numerals at the 12, 6, and 9. The two-toned stainless steel and gold tone accents mean that it will go with any of his cuff links.

As far as reliability and goes, Seiko has a great reputation.

And it is water-resistant to 50 meters (165 feet) in case he needs to ditch his Clark Kent costume and transform into Superdad at a moment’s notice–like when the kids want to have a water fight, or if he is called into National Guard duty, or even if civilians are suddenly in peril.

Hey, it’s happened before…like the time he helped evacuate his students when a lunatic barged in during exams and claimed he had a bomb.  Or when he volunteered to help run triage in Manhattan on September 11.

In other words, it is sleek and stylish enough that I can proudly take credit for what’s on his arm (besides me) but sporty enough to suit his tastes.
—
WANT IT: Visit SeikoUSA.com to find out where the Le Grand Sport (ARV $295) watch is sold or purchase the Seiko Men’s SGEE94 Two-Tone Le Grand Sport White Dial Watch on Amazon.