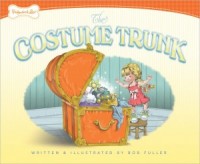 At the Book Blogger Convention this year, I met the founder of From Left to Write, an innovative online book club. Every month, they select a book and ask bloggers to share their thoughts about how the book inspired them. This month, the selection is The Costume Trunk by Paddywhack Lane creator Bob Fuller.

Here’s more about the book:
Courtney’s birthday is finally here, and she has invited all of her friends to the celebration! After blowing out her candles and making a wish, the kids go outside to play. Suddenly, Courtney’s runaway balloon sends her running deep into the forest, where she discovers an old tree house and a mysterious costume trunk.

The trunk provides the perfect costume for Courtney and each of her friends. It also becomes the passageway to the enchanting land of Paddywhack Lane, where you can be anything you want to be. All you have to do is believe!

In Paddywhack Lane, one by one, each of Courtney’s friends have their most cherished hopes, wishes and dreams come true…

…but, what about Courtney?

Will Courtney’s special birthday wish come true before it’s time to leave Paddywhack Lane and head back home for bedtime?

I’m thrilled that Paddywhack Lane is the July feature on From Left to Write since I know Bob Fuller, the author and creator of Paddywhack Lane, pretty well. He and his wife created Paddywhack Lane based on their eight children. Many of the characters are even named after their kids.

The Paddywhack Lane books recognize the power of imagination and encourage creative play. Their inspiration for creating Paddywhack Lane was watching their children play. With eight kids, imaginative and pretend play was very important.

Like the author of Paddywhack Lane, my husband came from a big family. He’s the oldest of seven! Many people who come from larger families understand that you don’t need to buy expensive toys or electronic gadgets to have fun. Instead, they encourage old-fashioned play like dress-up, elaborate make-believe games and outdoor sports.

Bob Fuller wanted to create a line of books that celebrates this concept for kids and that encouraged kids to dream about what they could be without limitations (e.g. you could grow up to be a ballerinaor a veterinarian, but you aren’t going to grow up to become a bee or a bunny). The Costume Trunk is the introduction to that land of imagination where kids can be anything they dream up. (Here’s some info on the educational philosophy behind the brand.) As an extension of the magical world created in The Costume Trunk, Paddywhack Lane offers a line of beautiful, costumed poseable play figures. (See our review here.)

My own son (3 years) likes to pretend he’s a mouse (from Tom & Jerry), a cat, a dog, a car from Disney’s CARS, a rock star, an astronaut, a monster, a Smurf, etc. So I like reading a book that discussed this concept and that encouraged even more creative play. Even though I have a house full of toys (I work in the toy industry!), I’ve noticed that his favorite games are make-believe and pretend. He’ll have as much fun with a paper bag from Trader Joes that we’ve decorated and made into an astronaut helmet or a monster head as with a high-priced toy.

So many things can spark imaginative play. I remember spending hours pretending to be a character from He-Man/She-Ra, Star Wars, the Smurfs, a Disney Princess, etc as a child. It was my favorite thing to do, and I felt that having characters I related to inspired my elaborate make-believe worlds. My mother was a teacher, and my grandmother was a child psychologist. And they always encouraged creative play without worrying too much about the inspiration. As a result, I had a lifelong love of learning, read whenever I have spare time, and am a book fanatic. So I will confess that I spent every Saturday watching Smurfs and every day after school watching He-Man or She-Ra and always wanted to read Smurf, He-Man or She-Ra related books or comics as a little kid, but I don’t think it ruined my mind as I went on to graduate with two degrees from Yale. I doubt the Smurf brand produced any great literature, but it captured my attention as a child and inspired many hours of play that didn’t require any props or toys– just my imagination.

Paddywhack Lane seems magical to me, and I love how it’s inspired my son to pretend to be a pirate, a puppy, a mouse and a bumblebee. Anything that inspires creative play is something I want to read again and again!

Want It:
Buy The Costume Trunk in Barnes & Noble stores or on BN.com, online at Amazon

or PaddywhackLane.com or at your favorite independent toy store today!

Note: The Costume Trunk was the children’s selection for the From Left to Write bookclub where you can read more responses to the book. Thanks to the author for the sample copy.

Previous Post
How Do You Make the Most of Quality Time?
Next Post
Sittercity Back to School Coupon Codes