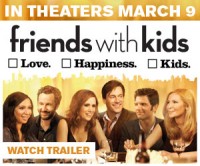 Join us for a Friends With Kids Twitter Party on Thursday, March 8th at 9pm Eastern for a fun discussion about parenting, love and relationships as well as a chance to win Fandango gift cards and prizes. Hashtag #friendswithkids

Friends With Kids is a daring and poignant ensemble comedy about a close-knit circle of friends at that moment in life when children arrive and everything changes. The last two singles in the group observe the effect that kids have had on their friends’ relationships and wonder if there’s a better way. They decide to have a kid together – and date other people.

Jennifer Westfeldt wrote, directed, and stars in the romantic comedy Friends with Kids. She plays Julie, a Manhattanite whose biological clock is about to run out, so she convinces her longtime platonic best friend, Jason (Adam Scott) to father a child with her. They seem to have a much easier time
juggling the responsibilities of new parenthood without the complication of being in a relationship with each other, which is in contrast to the two couples they are closest to (Jon Hamm, Kristen Wiig, Maya Rudolph, Chris O’Dowd). As their friends’ marriages implode, Julie and Jason’s happy equilibrium topples over as well when he falls for a hot young artist (Megan Fox) and she begins dating a successful businessman (Edward Burns).

There are big laughs and unexpected emotional truths as this unconventional ‘experiment’ leads everyone in the group to question the nature of friendship, family and, finally, true love.

Disclosure: We received free tickets to a screening of Friends With Kids and were compensated for placing an advertisement on Mamanista. All opinions are our own.