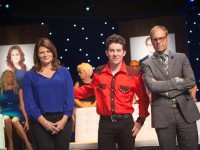 Martie Duncan at The Next Food Network Star Finale Filming with Justin Warner, the Season 8 Winner, and Mentor Alton Brown.

We’ve been fans of Martie Duncan, the talented blogger behind MartieKnowsParties.com, for many years. She’s been the featured entertaining expert on sites like MSN.com as well as MyRecipes.com, where she shares her stylish, affordable entertaining ideas and delicious, easy-to-make recipes. And she wowed the bloggers at SheCon2012 with her presentation on building your blog into a brand.

Over the past few months, we’ve tuned in to watch Martie Duncan on The Next Food Network Star and watched America fall in love with her sweet personality and Southern charm too! Martie made it all the way to the final episode. At that point, fans were given the opportunity to vote for the winner.

Martie was a fan favorite– especially after she fearlessly mastered the live demo in Miami in Episode 9. In fact, Martie was ranked second only to the winner on the public online fan vote prior to when the voting went private. The Food Network so far has refused to reveal the final vote count despite numerous requests on Twitter. So unless someone from the Food Network decides to reveal the vote count, I’m going to declare her (on this blog at least!) the Runner-Up for The Next Food Network Star Season 8 and top choice of the moms watching the show. Martie has been featured on several of the biggest mom blogs over the course of the show, and she had many strong fans in the blogging community, the South and on sites such as MyRecipes. I’ve heard from so many bloggers during the show that they were cheering for Martie, a fellow blogger!

Martie knows that everyone stresses about entertaining, so she creates perfect party plans that even busy moms on a budget can follow. Her plans don’t require a lot of money, and she can transform even simple finds from Walmart into a party that looks chic and expensive. She also knows that most of us have food budgets that require us to use affordable ingredients from our local grocery store or farmers markets.

While Martie has traveled the world and sampled some of the best food, she has an unpretentious style and focuses on food that looks and tastes good– rather than odd, expensive or hard-to-find ingredients. Parties are about celebrating families and friendships. In this tough economy, people are entertaining less, but they could entertain more if they had great, time-saving, budget-friendly ideas. Martie has creative ideas for birthday parties, baby showers, bridal showers, engagement parties, weddings, anniversary parties, graduation parties and all sorts of milestone events. But she also has tons of ideas for everyday gatherings with friends and families.

We shouldn’t need a special event to celebrate together. Why not throw a Summer Olympics themed party or host an outdoor movie screening for less than the cost of taking your family of four to the movies?

It’s surprisingly affordable to throw a fun and memorable party, and Martie Duncan shows you how on MartieKnowsParties.com, MyRecipes and on Twitter @martieparty and Facebook.com/MartieParty.  Food Network doesn’t have a show like Martie’s with everything from creative cocktails and mocktails, themes, invitations and decorating tips, cool centerpieces and delicious food on a budget. In this economy, a show like this is definitely needed.