Disney is always soaring to new heights with entertainment. From daring storylines to the real-life look of Pixar, there is excitement about what new adventure Disney will take us on next. With that said, nothing beats the classic Disney movies. We all grew up enjoying the magical tales of Snow White, Alice in Wonderland, and Cinderella. When one of the Disney classic movies comes out of The Vault, new and improved, it is a must-see.

I was given a chance to review the soon-to-be rereleased Diamond Edition of Peter Pan. This Blu-Ray combo pack includes the Blu-Ray, DVD, as well as the Digital Copy and Storybook App. There are many great special features including the short Growing up with Nine Old Men. We LOVE Peter Pan, and had the old version.  I was very impressed with how much better quality the Blu-Ray is. It really looked so much better than the older version! The Blu-Ray combo pack is worth it! 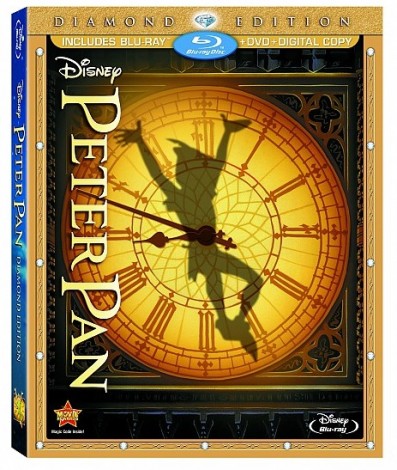 Is there anything better than the story of the Darling children being whisked away to Neverland? The Lost Boys are ever-endearing, and the mischievous Peter Pan takes us all on an adventure as he battles Captain Hook!  Some kids may be unfamiliar with this classic movie, but they may be fans of popular Jake and the Neverland Pirates, an interactive animated show on Disney Junior. If they watch Jake, they’ll know enough about the storylines of Peter Pan to be instantly caught up in the movie!

The Peter Pan Diamond Edition Blu-Ray Combo Pack will be available for purchase on February 5th. Don’t miss out on a chance to own a renovated classic!

Disclosure: I was sent the movie for review purposes. All opinions are my own.