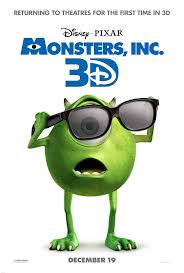 Are you ready to get your Scare On?

In 2001, Disney/Pixar introduced the world to some of the worlds most endearing monsters. Set in Monstropolis, monsters survive and thrive on world powered by the screams of children. Each night, the furry inhabitants slip into closets to catch screams of sleeping children (who are believed to be toxic), although the kids are becoming more difficult to scare. One of the most successful scream catchers, James “Sulley” Sullivan and his sidekick, Mike Wazowski, are in for a surprise when they accidentally bring a child back to Monstropolis after a night of scaring. The little girl, “Boo,” causes many problems and the situation becomes dire when Sulley’s rival, Randall, catches wind of her existence.

Monsters Inc has a new and improved look, as it was re-released into theaters: Monsters Inc 3D. The action is more thrilling and the laughs are more hearty so up close and personal! Since it’s release, it has come out on DVD and I had a chance to review it at home. Having a 3D TV, Monsters Inc 3D was a delight to watch. My kids, who did not get to see Monsters Inc when it first came out, enjoyed the movie and instantly fell in love with Sulley and Mike.

Previous Post
Mowgli returns in The Jungle Book The Movie: Rumble in the Jungle
Next Post
Help Fight Postpartum Depression with Jammies by Helene Laure