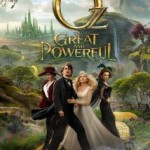 Oz, the Great and Powerful landed in theaters this last weekend, much to the joy and delight of viewers nationwide with an amazing $80.3 million debut.

Oz is intended to be a prequel to the classic 1939 film Wizard of Oz featuring Judy Garland as Dorothy. As you can read in the official summary below, the movie follows the path of the man who becomes the wizard of Oz along with how he gets there using his very own kind of magic  – ingenuity and slight of hand and eye, rather than the quick flip of a wand used by the witches of the land.

ABOUT Oz, the Great and Powerful:

Disney’s fantastical adventure “Oz The Great and Powerful,” directed by Sam Raimi, imagines the origins of L. Frank Baum’s beloved wizard character. When Oscar Diggs (James Franco), a small-time circus magician with dubious ethics, is hurled away from dusty Kansas to the vibrant Land of Oz, he thinks he’s hit the jackpot—fame and fortune are his for the taking—that is until he meets three witches, Theodora (Mila Kunis), Evanora (Rachel Weisz) and Glinda (Michelle Williams), who are not convinced he is the great wizard everyone’s been expecting. Reluctantly drawn into the epic problems facing the Land of Oz and its inhabitants, Oscar must find out who is good and who is evil before it is too late. Putting his magical arts to use through illusion, ingenuity—and even a bit of wizardry—Oscar transforms himself not only into the great wizard but into a better man as well.

While I thoroughly enjoyed the movie myself, I am not sure I would bring my very young sons to see it in 3D with all the images popping out towards the audience. I do think that someday they will enjoy both films (from 1939 and 2013) on DVD in our home, assuming that DVDs will still be the way to watch movies in a couple of years.

Parallels to the original made for fun mental comparison. Without giving it all away, viewers will enjoy a new use of the poppy fields, a bigger glance into the Emerald City, another tornado and the same starchy guards with the big black furry hats used by the wicked witch in the first movie. New additions, like the China Doll, come straight from the books by L. Frank Baum, from whom these movies are generated. Readers of the series will enjoy seeing a few of their favorite characters come to life in this rendition of the story.

Overall, I believe the movie will be well-received.

View the trailer below:

(Disclosure: I received two tickets to review this movie.)