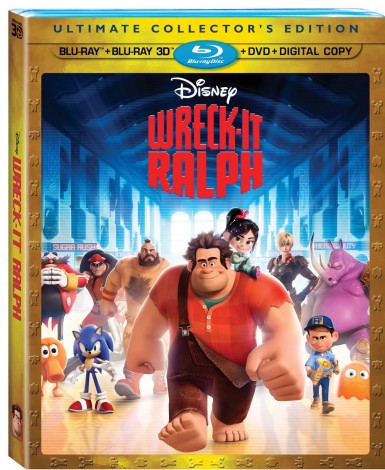 Wreck It Ralph is one of of those movies.

The story centers around Ralph, a video game character who wants to shed his bad guy ways and be the truly good guy he is at heart. Here is a quick synopsis:

From Walt Disney Animation Studios, “Wreck-It Ralph” takes viewers on a hilarious journey. For decades, Ralph (voice of John C. Reilly) has played the bad guy in his popular video game. In a bold move, he embarks on an action-packed adventure and sets out to prove to everyone that he is a true hero with a big heart. As he explores exciting new worlds, he teams up with some unlikely new friends including feisty misfit Vanellope von Schweetz (voice of Sarah Silverman). The film is directed by Emmy®-winner Rich Moore.

As with every Disney movie, kids are captured by the story and the adventure. Everything about Wreck it Ralph is entertaining and visually stimulating. Best of all? It is HILARIOUS. Adults will love the nod to the old school video game characters that are part of the cast (even though this might go over the heads of kids). Not to mention it boasts an all star vocal cast, including John C. Reilly and Sarah Silverman.

One of the best things about Wreck it Ralph is that the movie has it all: Action, romance and,  above all, a really good message. I loved being able to show my boys how Ralph, although initially a “bad guy” could change his ways and become good. And my sons absolutely enjoyed every second of the movie.

It is now one of my favorite movies and has become a regular for movie nights at my home!

Wreck it Ralph is now available on DVD.

Disclosure: I was provided the DVD for purposes of facilitating this review. All opinions expressed are my own.