**I was sent the The Berenstain Bears: Golden Brother Edition gift set for review.**

The Berenstain Bears are celebrating their 50th Anniversary this year and to commemorate the event special limited edition Golden Gift Sets have been released! I remember The Berenstain Bears’ books from when I was a little girl and loved reading them. Recently, I noticed my boys had discovered the show on PBS Kids and would tell me what had happened on the show each day. When I was contacted to review The Berenstain Bears: Golden Brother Edition, I knew they would be thrilled.

The Golden Gift Sets are available exclusively at Walmart and Sam’s Club stores in the U.S. for $19.99 each. Make sure you pick up both soon as they are limited edition and are going fast!

My youngest who’s 2, loves LOVES the Brother Bear plush and will not put him down. Except when he’s naughty and goes into “time out” (yes my 2 year old son puts Brother Bear in time out!) 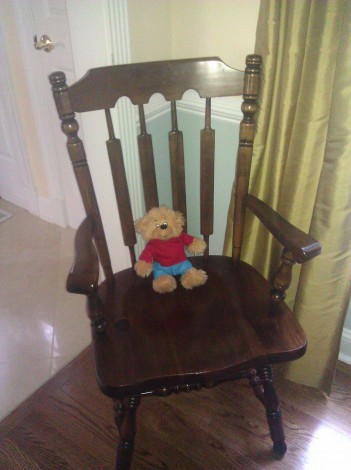 Brother Bear in “time out”