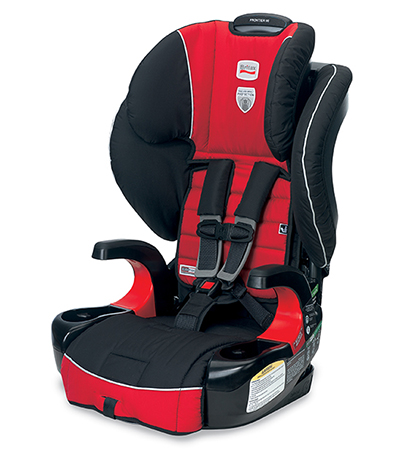 My husband is the car seat installer around here. I gave him the new Britax Frontier 90 with ClickTight technology without comment to see what he said.

After poking around the manual for a few minutes, he installed the seat in about 10 minutes and excitedly called me over to share what he had discovered. He said that you simply lift the panel, thread through the seat belt, and “click”…the seat is tightly and properly installed.

I’ve learned in the past that proper install is one of the biggest challenges parents face when using any car seat. NHTSA testers discovered that parents and caregivers installed seats too loosely between 47-65 percent of the time. This is an even bigger challenge when your child moves past the weight limit for the LATCH system.

A few years ago, I was able to tour the Britax facility and learn about their process. Britax emphasized safety and education first and foremost, over promoting their own product. When designing their product, they strove to be the industry leader in safety. They also said that even the safest seat will fail if it is not used consistently and correctly. So, alongside introducing new technology to reduce the impact during accidents, Britax is constantly looking for ways to make their seats easier for parents and children to use.

That’s why ClickTight is such a huge innovation. This technology can reassure parents that they have the seat safely and securely installed. “No shoving, kneeing, yanking, or tugging required.”

Both the Frontier and the Pinnacle feature the latest Britax safety technologies, including SafeCell compression that lowers the center of gravity and reduces forward head movement on impact, integrated steel bars that strengthen the seat’s connection to the vehicle and reduces forward-flexing, the energy-absorbing Versa-Tether designed to slow forward movement, and True Side Impact Protection with an extra layer of EPP foam.

Plus, there are the classic Britax “ease of use” and comfort features that encourage consistent use of the seat. There is an EZ-Buckle system that holds the buckle forward, a key feature in a seat primarily used by children old enough to buckle themselves. Since the kids seem to grow like weeds, we also appreciate the tangle-free, no-re-thread adjustable harness. The kids love the cup holders–my daughter’s seats have them and my oldest son is very jealous of his big sister.

Disclosure: I received this seat from Britax to review. I have always purchased Britax seats and was very pleased with their performance when my family had a big auto accident several years ago.