If you could live anywhere, and build your own custom home from scratch, what would your dream house be like? Me? I would probably want a renovated Victorian with easy access to the rails and a short distance from New York City. We’d have a wraparound porch looking out our wooded property, dark hardwood floors, an ornate fireplace, and there would be plenty of character. My daughter’s dream house, on the other hand, would probably look a lot like Barbie’s 2013 Malibu Dreamhouse.

According to Barbie’s “people,” “After all her travels, Barbie realized that Malibu is where her heart is and has decided to stay there in a newly renovated Dreamhouse! The newly renovated Dreamhouse is three-stories, has 6 rooms, two elevators, and unmatched “ocean views” of the Malibu coastline. And of course her new Barbie’s Dreamhouse features a few luxe details – like pink stainless steel kitchen appliances and a walk-in closet with its own elevator – a first for the fashion icon.” 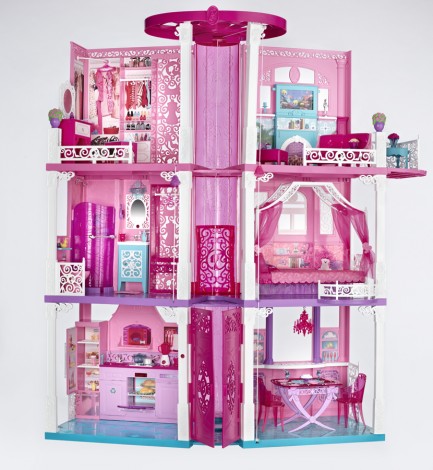 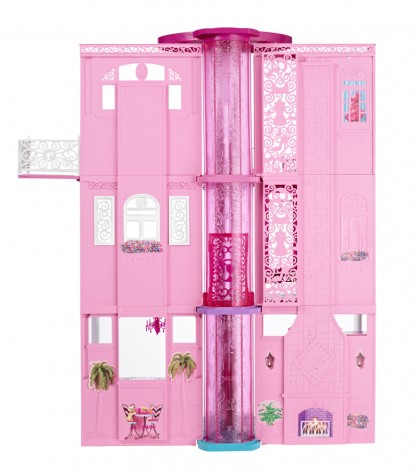 Before my daughter could get to exploring, I had to assemble the house. I knew this would be a challenging task when I saw the included one sheet featuring Barbie and a flustered Ken, poking fun at the number of parts and stickers involved.

I took one look at the printed instructions and jumped immediately to the Barbie Dreamhouse Assembly Instructional Video. A little over an hour later, I had the house mostly assembled. The lower side walls keep popping off, as do the front doors. The main elevator sticks just below the third floor. There is an included sheet that says that if the elevator is “immobile,” I should “force” it back into place. Another review I read suggested possibly shaving it down to help it fit better. After another half hour, I had all the stickers on and the furniture assembled.

Definitely assemble the Barbie Dreamhouse while the kiddos are sleeping or at school unless you want some very frustrated kids pestering you until you completely lose all sanity. I consider myself fairly savvy about assembling toys (and real furniture) but this is above my level of ability. My father is an engineer so I am hoping he can help–after all, he did build our deck.

All that effort was definitely worth the look on my little girl’s face. 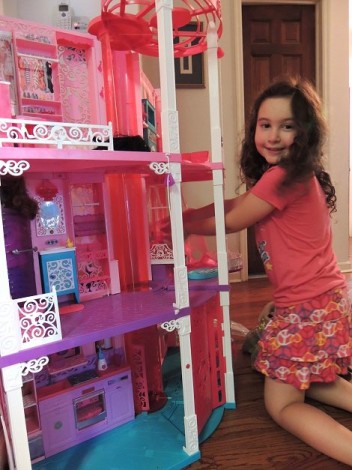 She’s fairly tall for her age (7 years old and over four feet tall), so you can see this is a sizable Dreamhouse at just over three and a half feet, with plenty of amenities to explore and enjoy. 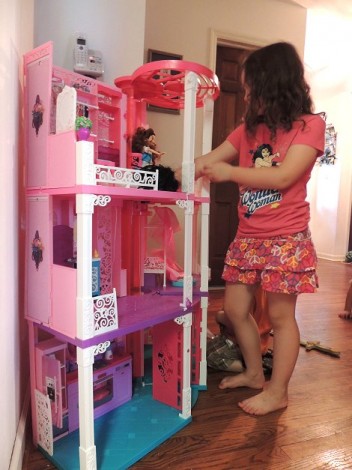 She immediately went right for the elevator and loved the jeweled pulls that operate it. When I asked her about her favorite feature, she said, “ELEVATOR! ELEVATOR, ELEVATOR!”

After she had the elevator figured out, she decided to take her dolls (Belle and Mulan Barbie) through a typical day: waking up (there’s a trundle bed for guests), brushing teeth and showering (she said the toilet makes it extra realistic), making and eating breakfast, getting dressed, and relaxing on the balcony (another favorite feature). 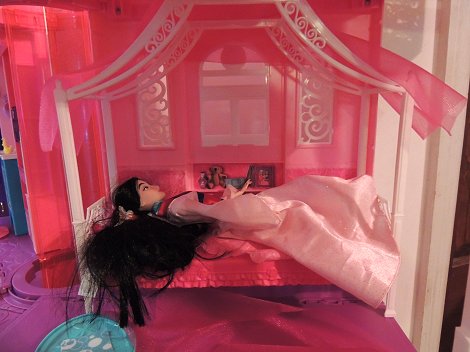 She really loved the closet elevator idea, too. 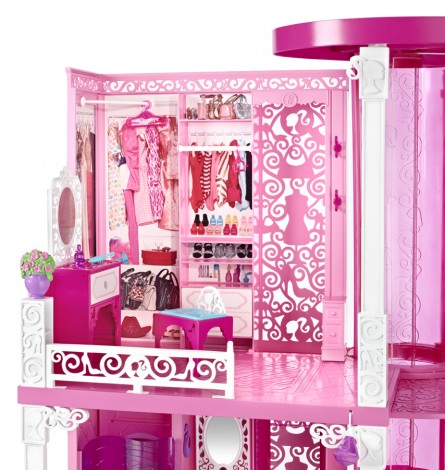 In Barbie’s kitchen, there’s a recycling bin–a cute touch that shows how Barbie is keeping up with the times.

As a parent, I appreciate that most of the little food, decoration, and other prop accessories (and there are tons) can be snapped onto tables and counter tops and mantles. My daughter has spent about an hour rearranging and redecorating and giving her dolls elevator rides. And she’s eager to find all the sounds and lights throughout the house.

With lots of time, attention to detail, and a little improvisation, you can “build” this Dreamhouse for your Barbie fan, who is sure to get hours of enjoyment playing with it.

WANT IT: Barbie’s brand new 2013 Dreamhouse is now available at retailers nationwide for every girl who has always wanted a Dreamhouse of her own. Available at Walmart, Amazon, and retail stores nationwide; MSRP = $184.99

—
Disclosure: I participated in this sponsored campaign for One2One Network. I received monetary compensation and product to facilitate my post. As always, my time may be compensated but my opinions are never for sale.