Pixar’s Monsters University will hit Blu-Ray 3D, Blu-Ray and DVD on October 29 and wow is this one chock full of extra fun features! 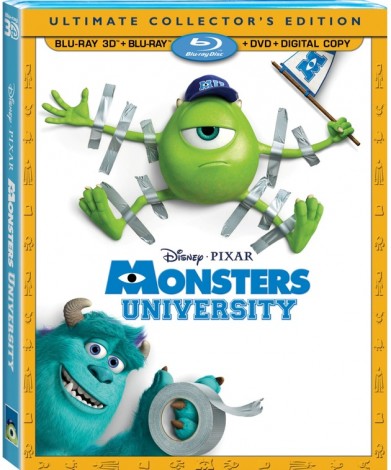 If you didn’t get the chance to see the movie in the theater, here’s a quick brief synopsis:

Disney Pixar proudly presents the hilarious story of how two mismatched monsters met and became lifelong friends in a movie screaming with laughter and oozing with heart. Ever since college-bound Mike Wazowski (Billy Crystal) was a little monster, he’s dreamed of becoming a Scarer—and he knows better than anyone that the best Scarers come from Monsters University (MU). But during his first semester at MU, Mike’s plans are derailed when he crosses paths with hotshot James P. Sullivan, “Sulley” (John Goodman), a natural-born Scarer. The pair’s out-of-control competitive spirit gets them both kicked out of the University’s elite Scare Program. With their dreams temporarily dashed, they realize they will have to work together, along with an odd bunch of misfit monsters, if they ever hope to make things right. Get ready to party with hours of exclusive bonus extras, including an inside look at the world of monsters and the animated theatrical short film “The Blue Umbrella.”

The Blu-ray set is packed with a ton of extra feautures: deleted scenes, “The Blue Umberella” an animated short film from Pixar and a bunch of extras that illustrate what goes into the creation of the movie, production, sets and design, music and score, animation, backstories from the crew and much more!

Monsters University Blu-Ray 3D, Blu-Ray and DVD are available now for pre-order at Amazon.com  and comes arrives in stores on October 29th!

For the latest news and information about Monsters University, stay connected on social media: