Christmas morning is a special time. Ok, it is special, but let’s be real for a second. Chances are, you are awoken by your excited, squealing children pouncing on you at 6am (if you’re lucky) yelling “He came, Santa came!!” They practically pull you out of bed and drag you down the stairs to see what the big guy put under the tree. Then the chaos ensues. Wouldn’t it be nice to slow things down a bit and relish your time together that morning?

This Christmas, the HUB Network is preempting all programming on Christmas morning to broadcast a traditional, crackling Yule log on the fire and holiday music from 6-10am to create an aura of festivity and togetherness.

Animated characters from a variety of Hub Network shows make cameo appearances around the fire, as seen at Pinkie Pie’s house where stockings have been hung for each of the core-cast ponies of “My Little Pony Friendship Is Magic,” including Princess Twilight Sparkle, Rarity, Rainbow Dash, Applejack, Pinkie Pie and Fluttershy. Fans can also go to Hub Network’s YouTube channelon December 25 to transform their computers and smart phones into crackling fireplaces of fun. 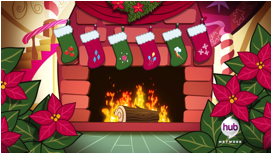 The original “Yule Log” program was first broadcast on Christmas morning in 1966 by local station WPIX as a gift to New York City residents, most of who live in apartments and do not have fireplaces. The program was a critical and ratings success and was broadcast for 23 years until it was taken off the air in the 1990s. The traditional “Yule Log” TV program has since returned and can be seen on numerous stations nationwide.

To find the channel in your area, please visit http://www.hubworld.com and check the channel locator at the top of the page.