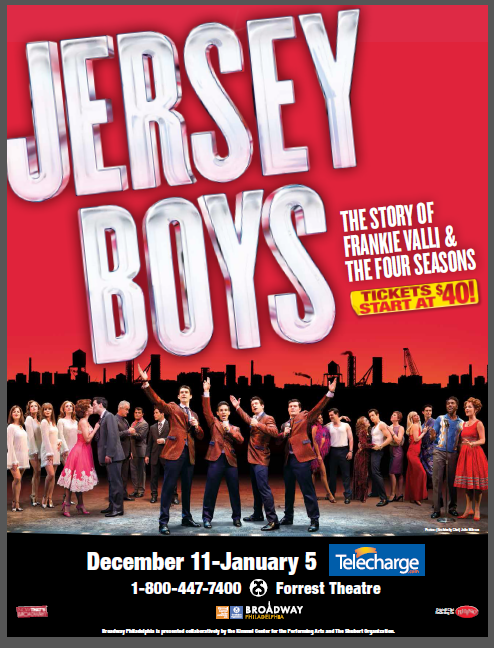 Dying to get out of the house after this weekend’s snow?  Looking for a unique holiday gift? Go see Jersey Boys opening this week at the Forrest Theatre!

After breaking Forrest Theatre box office records SEVEN TIMES during the premiere engagement, JERSEY BOYS is “Workin’ Its Way Back” to Philadelphia! “TOO GOOD TO BE TRUE!” raves the New York Post for JERSEY BOYS, the 2006 Tony Award®-winning Best Musical about Rock and Roll Hall of Famers The Four Seasons: Frankie Valli, Bob Gaudio, Tommy DeVito and Nick Massi.

This is the story of how four blue-collar kids became one of the greatest successes in pop music history. They wrote their own songs, invented their own sounds and sold 175 million records worldwide—all before they were 30! JERSEY BOYS, winner of the 2006 Grammy® Award for Best Musical Show Album and most recently, the 2009 Olivier Award for Best New Musical, features their hit songs “Sherry,” “Big Girls Don’t Cry,” “Rag Doll,” “Oh What a Night” and “Can’t Take My Eyes Off You.” “IT WILL RUN FOR CENTURIES!” proclaims Time Magazine. Nearly 160,000 theatergoers attended the premiere engagement of JERSEY BOYS in Philadelphia.