Walking with Dinosaurs is coming to Barclays Center and I can feel the excitement–or is that a giant tyrannosaurus rex? 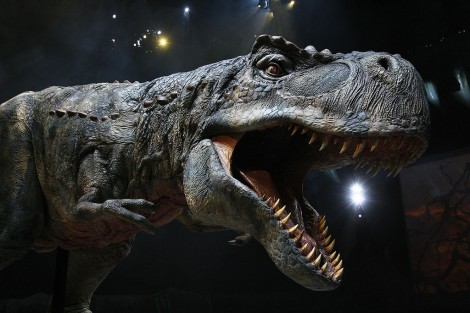 My eldest son is a junior paleontologist who has memorized every episode of the BBC “Walking with Dinosaurs” series and I know he is going to be thrilled to see these dinosaurs–moving, roaring, practically breathing–live! And when the people at Barclays Center say, “live,” they mean it! Using advanced animatronics, Walking with Dinosaurs Live creates the illusion that the audience has been transported back in time to witness real, alive dinosaurs hunting, raising their young, and more.

“Ten species are represented from the entire 200 million year reign of the dinosaurs. The show includes the Tyrannosaurus Rex, the terror of the ancient terrain, as well as the Plateosaurus and Liliensternus from the Triassic period, the Stegosaurus and Allosaurus from the Jurassic period and Torosaurus and Utahraptor from the awesome Cretaceous period. The largest of them, the Brachiosaurus is 36 feet tall, and 56 feet from nose to tail. It took a team of 50 – including engineers, fabricators, skin makers, artists and painters, and animatronic experts – a year to build the production.”

Buy Tickets: Tickets for Walking with Dinosaurs at Barclays Center are on sale now and can be purchased online via Ticketmaster or by calling 800-745-3000. For more information about the show, visit: http://www.dinosaurlive.com/

Disclosure: As a member of the press, I am receiving tickets to attend opening night of Walking with Dinosaurs at Barclays Center and share my experiences with you.

Previous Post
Disney Junior Give a Book, Get a Book Helps Kids in Need
Next Post
Keep an Eye on your Angel with the Angelcare AC1200 Monitor