There are many things to prepare for when it comes to being a World Cup fan. You have to choose the right jersey, you have to make sure to have your match schedule on hand (you wouldn’t want to miss a game, right?) and you have to plan an epic World Cup viewing party!

And while the World Cup is not-to-be missed, there are a few things that get overlooked as we prepare for the fun that surrounds matches, such as food safety. Whether it’s a casual night of watching your favorite countries compete or you are hosting a World Cup party for all of your friends, food safety needs to be a priority. The CDC estimates that about 1 in 6 Americans (about 48 million people) could suffer from foodborne illness this year. 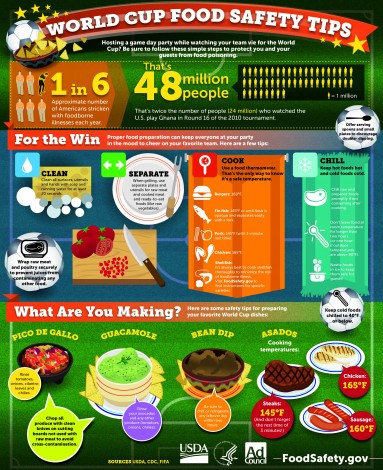 Keep your World Cup party guests (and yourself!) safe by following these 4 simple guidelines for food safety from FoodSafety.gov:

When preparing party food, clean kitchen surfaces, utensils, and hands with soap and water. We’re used to washing our hands before sitting down for a meal, but may forget in a party atmosphere.

Cross-contamination occurs when raw meats, like your chicken wings or steaks, touch ready-to-eat foods like veggies. In the refrigerator, place raw meat, poultry, and seafood in containers or sealed plastic bags to prevent their juices from dripping onto other foods. When taking food off the grill or out of the oven, don’t put cooked food on the same platter that held raw meat or poultry.

Cook foods to the right temperature by using a food thermometer. That’s the only way to know it’s a safe temperature. For example sausages should be cooked at 160° F and poultry to 165° F.

Chill raw and prepared foods promptly if not consuming after cooking. Follow the two hour rule: you shouldn’t leave food at room temperature for longer than two hours and try nestling foods in ice to keep them safe for guests!

To learn more (and talk all things World Cup!), join the World Cup Chat on June 17th at 1pm EST—just hours before the anticipated Brazil vs. Mexico game! We’ll be offering game-day party tips—just follow the hashtag #WorldCupChat for the English chat and #WorldCupFiesta for the Spanish version.

Previous Post
CHARM IT! Let’s Girls Create Their Own One-of-a-Kind Jewelry
Next Post
The New and Expanded Meadow at Longwood Gardens