Getting your kids to buckle up is something you need to start from a young age- both to keep them safe, and to help them develop good habits when it comes to being safe. We all know that getting our kids to do what we say can be a challenge, but this is one that you can’t let go of. You are the parent.  It’s your job to keep your children safe, even if they don’t like it.  (And buckle up yourself, set a good example for the kiddos.) 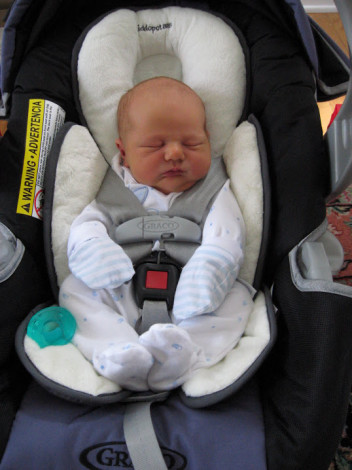 As they get older, it won’t get any easier.  The eye rolls are only going to increase. If your child have already gotten it into his or her mind that they need to buckle up, it will be a habit and not an argument.  Parenting involves compromise, but here’s one rule that should not ever be up for debate – the car doesn’t move until everyone is wearing a seat belt. If you say it, and if parents buckle up themselves, your tween will buckle up. If they don’t, that’s a fight worth having. It might just save your child’s life.

Did you know that motor vehicle crashes are a leading cause of death for children age 1 to 14 in the USA? Over the past 5 years, 1,522 kids ages 8-14 died in car, SUV and van crashes. Of those who died, almost half were unbelted. As children get older they’re less likely to buckle up. The percentage of child passengers who die while riding unrestrained generally increases with age and is most pronounced among 13 and 14-year-olds regardless of seating position.

Have you heard of the Ad Council and The Department of Transportation’s National Highway Traffic Safety Administration (NHTSA) campaign “Never Give Up Until They Buckle Up” , which asks parents to make sure their kids are consistently and properly wearing their seat belt every time the car is moving.

When To Move From The Booster to a Seat Belt?

“When Is My Child Ready for An Adult Seat Belt?” –
Learn when to transition your child out of the booster seat to a seat belt and find out how it should properly fit. http://www.safercar.gov/parents/SeatBelts/Beyond-Booster-Seats.htm

Seat belt safety should be non-negotiable.

Compromise elsewhere. Does your child just hate broccoli? Sure, skip it tonight. Macaroni and cheese for lunch and dinner? It never killed anyone just once in a while. Driving just down the street and don’t want to buckle up? Not going to happen. As a parent, sometimes you let your kids have their way. But their safety should never be up for negotiation, no matter how much they push back on the seat belts being uncomfortable or unnecessary for just a “short” drive. 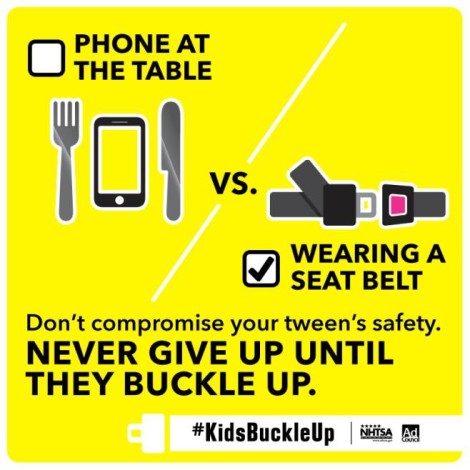 You are your child’s #1 influence on using a seat belt- so practice what you preach, and buckle up yourself, mom and dad. Buckling-up is an important habit to instill in children at a young age. Parents can lead by example by wearing a seat belt themselves and by insisting on seat belt use.
Seat belts and safety seats, if used correctly, dramatically reduce the risk of fatality or injury to children. However, research shows, in 2012, over one third (37%) of children killed in car crashes were not in car seats or wearing seat belts. Keep your family out of that number- buckle up.  It saves lives.