What is Family Fire?

A shooting involving an improperly stored or misused gun found in the home, resulting
in death or injury. Incidents include unintentional shootings, suicides and other
gun-related tragedies. 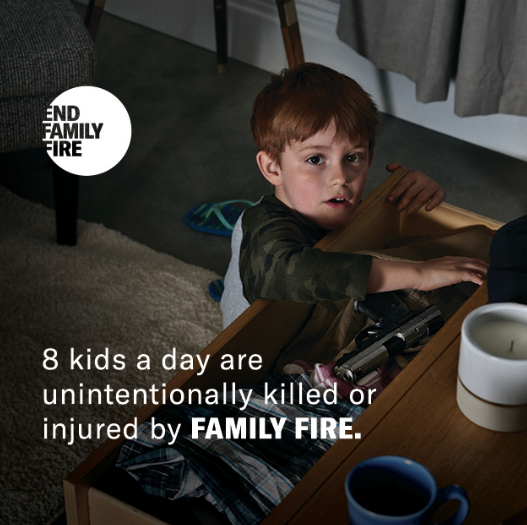 Why is Family Fire an issue?

4.6 million children live in homes with access to unlocked or unsupervised guns.
Every day, Family Fire unintentionally injures or kills eight children and teens.
Over 75 percent of school shootings start with kids having access to unsecured and/or
unsupervised guns at home.

No matter your view on the second amendment, there’s one thing we should all agree on: children should never be able to get their hands on a gun. However, eight kids are unintentionally injured or killed by a loaded, unlocked gun each day in America. Released on Aug. 8 in order to protect those eight kids, the “End Family Fire” campaign, “a movement aimed at putting safety first,” was launched “to promote responsible gun ownership in the home.”

If you’re like most parents, you probably have some questions the first time your child asks to play with a new friend or in a new place. How will they be supervised? Are the TV shows and games age-appropriate? What about Internet access and pets and allergies? However, we’ve learned that there’s one important question that over half of parents never think to ask:

“Is there an unlocked gun where my child plays?” 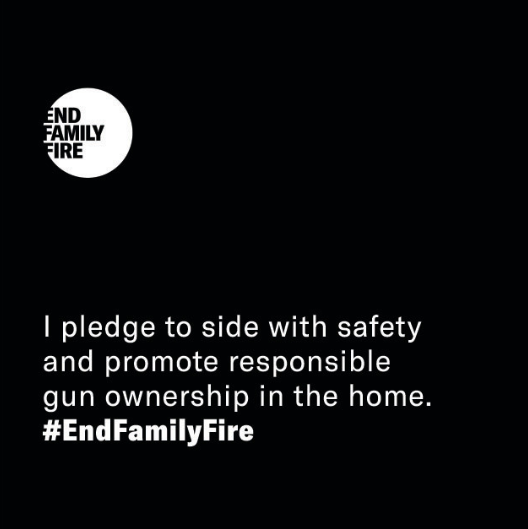 Asking this simple question is an important step every parent can take to help keep their children safe, and possible save their child’s life.

In a chilling video from the Ad Council, the mission of the campaign is driven home through a conversation between a father and son that goes from lighthearted to dark very quickly. After tickling his son and asking him to get ready for his day, the dad is faced with an unexpected question that leads to the candid chat: “Hey, Dad, do we have a gun?”

Family Fire is a real and preventable tragedy that affects millions of families.

The boy first discusses the dad’s gun (which he says he bets looks like a toy) and its purpose, then asks where it’s kept and if it’s loaded, guessing the answers to both questions correctly before his dad can curb his son’s curiosity. The terror in the father’s eyes as his son suggests that the gun could be used by him to protect his mom when the pair are alone is enough to give you chills, but the boy’s small voice discussing such a huge and heavy topic will bring you to tears.

What can you do?

The risk of Family Fire at home can be decreased by going through a list of precautionary steps twice a year.

1. Always lock and store guns out of children’s reach.
2. Always store ammunition separately from a gun—this reduces the risk of Family Fire by 61 percent.
3. Consider offsite gun storage options in your area.
4. From gun locks to safes, there are a range of effective solutions best suited for every gun and home.
5. Always transport the gun inside of a cool, clean carrying case or storage box. These carriers should always
have numerical combinations or fingerprint-recognition locks.
6. Have regular conversations about gun safety with those close to you to reduce the chance of Family Fire
incidents.
7. If you are not confident or have doubts about gun ownership, consider other home-protection alternatives.
8. Gun owners are highly encouraged to help end Family Fire incidents by educating friends, family and members
of their community about responsible gun ownership.