Like a Charles Dickens story, the spirits of past seasons have returned–whether it is to haunt or to help current Project Runway contestants, we’ll just have to see.

The contestants are informed that they will have to create a red carpet look…for the Emmies (with you so far, Mr. Gunn)…inspired by… Awkward sponsor product-placement taken care of, let’s meet your clients. They are the gorgeous ladies of Project Runway past! Kenley! Kenley gets paired with Ven and Fabio, two dudes who really know how to fit a woman’s figure. Mila! Look at you Mila, all rested and almost smiling! Mila gets Alicia and Raul, both of whom say they cannot do red carpet gowns. Seriously? Look, the red carpet challenge is pretty much a given. Showing up to Project Runway without at least some idea of how you might tackle a red carpet challenge is like looking shocked and offended when they ask you to make a dress out of candy or hardware. April! And she gets paired with Happy April…I mean Melissa…and Professor of Defense Against the Dark Arts of Dance, Dmitry (who by the way is way more smiley and upbeat in person but just as adorable). Isn’t this just the perfect little fashion a trois? Laura! Her designers are Elena and Buffi and the odd couple song starts playing in my head. One is severe, serious, and stressed and the other is light-hearted and funky. Hopefully Elena doesn’t get staked…although apparently she was raised by wild dogs in the dark forests of the Ukraine so maybe she is more of a werewolf? More about that when I get to the middle designs. Valerie! And since she is set-up with Sonjia and Nathan, the extremely low drama quotient means we will see mere seconds of them throughout the rest of the episode. Irina! Who is fully prepared to put the smack down on any sloppy and inadequate designs from Kooan and Gunnar Anya! The previous winner and beauty pageant queen is matched with Christopher and Andrea, which produces way more drama than anyone initially anticipated.

As with any team challenge, there were match-ups that worked and those that fell apart at the seams. This team challenge did not have an assigned leader which is both better (no one can claim he was just following orders) and harder (both designers have to find a way to show some of themselves in the design while creating a cohesive look).

Let’s see who had smooth driving and who skidded off the road. This was bland and poorly made. The silhouette was standard red carpet fare but the material looked cheap and the back was puckering. I have a hard time believing the judges couldn’t tell that chiffon scarf/train was added last minute to cover up the flaws, which was apparently Irina’s idea. I thought, maybe, this looked better in person than on television but Laura Bennett has a lot to say about how terrible this design really was.

The only interesting element was the necklace, which was just taken off the Lord & Taylor accessories wall. (Hey, there, Lord & Taylor, thank you for hosting us Lifetime Moms this weekend!)

Well, maybe it had one more thing going for it: Irina. Whatever else you say about Irina, she is gorgeous and she can rock just about any gown.

Ultimately, I think every last person on the show, from the other designers to Gunnar and Kooan to Irina, was shocked this was in the top two and I have to wonder why it was. While it is tempting to blame producer manipulation, I think if they really wanted to do that, they just would have paired Gunnar with Christopher for maximum drama. Still, there were better choices if they wanted to have a more traditional red carpet look in the top two so…I just have no explanation. 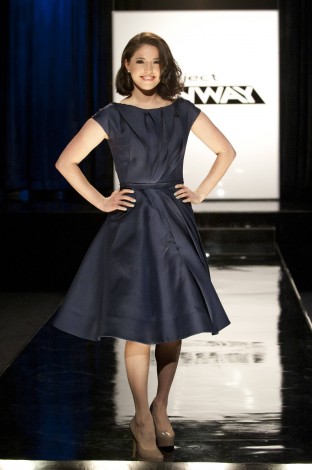 Ven is a craftsman and he managed to design a dress that reflected his aesthetic (although I wonder when they are going to call him on his signature origami folds) and yet 100% pleased and flattered his client. As little credit as Fabio got, he executed the top. To my eye, the top is more elegant than the skirt, although both are expertly done considering the time constraints.

This design is fancy brunch, maybe cocktail party, but not really red carpet. This effect isn’t helped by the conservative color but they really did not have a choice in that. The styling, however, could have given it a little more pizzazz. Kenley’s delight in the design no doubt sold it. This is unflattering and ugly. Christopher and Andrea turned a beautiful woman into a thick mess. Interestingly, although Andrea made the skirt, Christopher had trouble with sloppy slits in the past, in my opinion. I know they had no control over the color but did it have to be head to toe espresso? That color is just awful on Anya. And were there no other brown fabrics that would have been easier to work with? The designers know their time constraints going into this. Why would they choose something so difficult? And the bust looks lumpy, especially as you near the belt. This is just awful.

To be fair to Christopher, he had originally planned a different, more structured neckline, which was covered up by Andrea, under advice from the client and, apparently, with Tim Gunn’s blessing.

This dress has almost none of Andrea’s trademarks in it. I suspect that was part of the reason she had trouble getting her head in the game. Still, unfavorable editing and antipathy towards the challenge are still no excuse for her snail’s pace when Christopher’s chance was also on the line.  And, editing or no editing, she still denied saying she was ready to go home.

I’m sure Andrea is a lovely and talented woman but she seemed to be responsible for many of the failures of this garment. Honestly, I really do not know why Raul and Alicia could not have pulled this together. Mila wears snazzy jackets and pants as her everyday uniform. If they do menswear, a menswear inspired look would have suited their client and stood out from the rest of the pack. I really cannot understand why Raul claims that Mila’s personal style was what threw him off. And, dear me, that styling! That horse tail extension was just ugh.

Once they realized they had two poor fabric choices, I think they needed to find a way to combine and manipulate them. The black crepe was too funereal on its own but could have been enlivened by the red and black zebra print.

Neither of these contestants has made a particularly impressive showing and neither really drew any camera time so it is not a surprise one of them was booted. Raul seemed slightly more responsible for the design so he took the fall.

Both bottom designs were awful. I might have chosen Andrea for the auf but really I am not terribly disappointed to see Raul go, either.