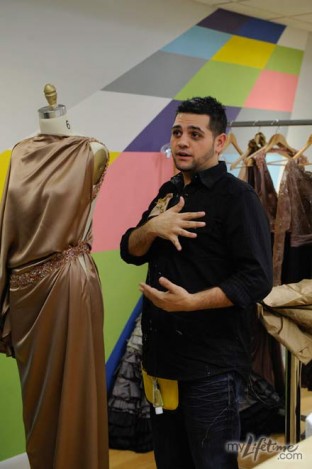 Lifetime gave me the opportunity to interview Michael Costello, who was the final Project Runway contestant to be eliminated before the finale at Fashion Week. I’m excited to tune in for the Finale, Part II, Thursday, October 28 at 9pm ET/PT.

His elimination is now the subject of great internet debate–why did he have to compete for a spot when he “won” the previous challenge? why was he eliminated over Gretchen, whose collection seemed to be more of a line and have less “wow” to it? and was his breakdown genuine?

I never really warmed up to Michael Costello as a designer but he did seem to be a quirky, funny guy who definitely could drape and sew.  And his friendship with Mondo was just heartwarming.

Despite drawing a lot of criticism from his fellow designers for his “inability to sew”, he always seemed to produce finished garments with straight seams.  What he lacked, to my couch-critic eye, was any real training in some of the more complicated techniques of construction, which makes a lot of sense given that he has no formal training.  I think that, early on, the designers seemed to resent what they saw as Michael taking up their time to steal their ideas and what Michael perceived as learning from others who had that training.

The judges certainly seemed to think Michael had talent–awarding him several wins and praising his work.  Whether his melt-down on learning that he was not in the final three was genuine or not, last night, watching with my mother, I said the judges had built him up and then ripped it away from him. I agree with Laura Bennett: all that is missing is the bucket of pig’s blood.

My mother asked me, “How are you going to interview him after that face?”

Well, I had a phone call with Michael, along with a few other interviewers, and this is what we found out about our Gypsy friend:

Really simple but there is an insane wow factor couturier meets simplicity. 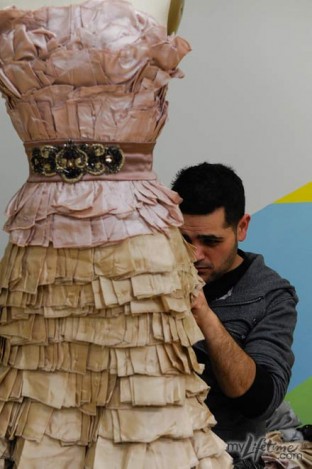 Candace: You seemed to have the most success with simply-designed, draped pieces […] and less so with the more “worked” pieces that involved a lot of complicated techniques—why did you return to those types of pieces in your final collection?

I just wanted show my range that I can do beautiful pieces that are structured. Because I do know how. Even though I didn’t know what princess seams were, I do know how to do structured pieces because I run a business and I get clients who need wedding dresses. I wanted to show my range and show that I could do separates, or a beautiful corset or beautiful fringe top.

There were about five of the ten-piece collection that were really great dresses that were a spin off of my black dress that had the highest scores, that Heidi loved, and they were just really, really gorgeous. I wish I never stepped away from that, in a way, but I’m just thankful because I love the collection that I made it was just so beautiful and it is still dear to my heart. Mix the two together and I think they all just work together really well.

Candace: You felt fairly confident going into and you gave the judges more of what they had praised during the competition, why do you think you were eliminated?

I don’t have anything negative towards the show and I hope that doesn’t come off as negative but I really feel like it was done for ratings. 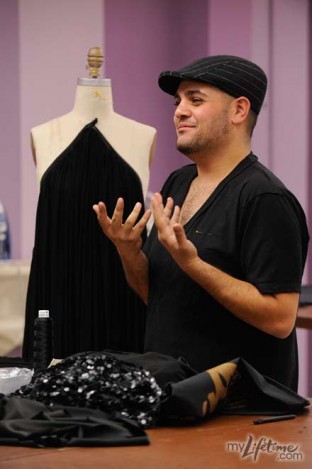 What is your favorite piece from the season that you did?
I like my fabric challenge dress, I thought it was kind of cool. It’s a tie between my long black dress with the slit and that dress they were both really fun.

Louis from Movie phone: Walk us through [your reaction to the elimination]…it looked like you couldn’t even look at the judges…

I didn’t want to…I didn’t want to look at the judges because I feel like they screwed up. I was so hurt and blown away because I put so much effort and so much time and work into that collection. Literally, as soon as I got off the airplane […] I went and bought a sewing machine and bought feathers. I pushed myself to different limits that I never did like dying feathers and hand-drying them and not sleeping for three days in a row to finish one dress. I was so disappointed and I’m not disappointed anymore, though. Throughout the season, I did ask God to take me as far as he could take me. The reason I was so disappointed […] Why did I lose my cool if I was a humble guy. The day before all of that happened, I was talking to mom and begging her to come just in case I made it to fashion week and she and she didn’t want to go because my boyfriend was going to go. I was just dead inside because I knew that she’ll never get to see the collection.

Louis: When you saw the other three were you sure you were going to make it?

I thought my collection was pretty strong and was pretty good. And the judges still said positive things about it and they did see that there was workmanship was there and the craft was there and the talent was there. And they said my confidence level didn’t come across too strong and maybe it didn’t. I was pretty confident but when you are up there you get terrified, you get tongue-tied and you don’t know what to say and you don’t know what to do. I had a panic attack before it was time to talk about my collection. I overheated and had a severe panic attack. I was not eating, how nervous I was, I was 18 lbs lighter than I normally was. I was very stressed out.

I was not that impressed with Gretchen’s collection but I did see the whole look when it came together at Fashion week and I thought it was really beautiful she really took it there and she really gave you a beautiful element of fashion.

I think they all did a really good job…but my “win” is for Mondo.

Louis: You and Ivy were actually friends now.

I have nothing but nice things to say about Ivy Higa. She and I ran into each other in the streets of New York. We had some coffee and we got to talking and she was woman enough to apologize to me. […] She’s cool in my book, I like her a lot, I really do.

You were upset with something April said about you.

I really don’t like April at all. I didn’t know we were not cool with each other. I sent her a letter on facebook and said, “Hey, I watched the latest episode and I’m shocked that you were saying things about me.” I really didn’t know who was talking about me. The thing is I just didn’t know why she didn’t like me so much when I would pay her so many compliments the entire season. […] Then I was just blown away by the comments she made. She said, “Right now you are cool in my book but back then it was different. But I’m good with you now.” But then, on October 15th, I read an interview and she is still mocking me. People just really need to let it go. I let things go …you just really need to let it go. So what if my dresses are ruched and held together with a cord? The judges loved them and millions of other viewers loved them, too.

Interview 2 (sorry…didn’t catch your name and outlet!): Going back to your departure—can you talk about what your relationship with your mom is like now?

I have a good relationship with my mom. They do give support but it comes with restrictions like they want me to be a better person or they want me to be straight. But they’re not the kind of parents who say “No, I don’t want you to do that. Just stop everything you are doing right now.” There were times when they were sick of helping me out with my struggles and asked me to give it all up but they have always been very supportive and they have always been there for me.

When I went back and talked to them, they still didn’t believe me that I got eliminated. They kept watching it, they never missed an episode. I did talk to my brother last night and my sister. They were extremely upset […] about comments that my partner made. They were just hurt about that more than anything. OK, well, you guys are mad but you don’t see the pain and heartache that I went through at the end of the day. I’m doing all of this for myself but also how am I going to tell you guys that I’m not going to fashion week? And that’s why I was crying.

Interviewer 2: Judges generally loved your designs but you got talk from the other contestants that you couldn’t sew. Why do you think there was such a difference in opinion?

I guess it is because they all have their own techniques and everyone has their own process. Andy said it a few episodes ago: “he gets me and he understands me and everyone has their own process…” That’s just my process. If I just drape my dresses and throw ten million pins in them until it looks the way I want it and then I take it to the sewing machine. It comes off as very simple, very elegant. And the judges have seen that is my process. Heidi loved so many of dresses and she wants so many of my dresses. And I think if Michael Kors wore dresses, he’d want my dresses, too!

Challenge after challenge they would just keep wondering “why, why, why, when we went to school for all of this, why are we not we getting the same praise?” I just do it naturally and you don’t always have to be a Parsons graduate to get to where you have to get. I’m not mocking fashion school. I would still love to go to fashion school. Just appreciate people for what their process is and how they do things. Never mock them and offer them support. I was curious. You know, I’m a learner. I love to learn new techniques and grow. Hey, if someone wants to teach me something, I’m all ears.

I never repeated work just to be safe to make it to another challenge. I always took inspiration from every challenge.

Interviewer 2: In what aspects did PR help you in growing?
It definitely pushed me to push my limits and made me understand that I’m capable of doing so much more technically. Before, everything would be a lace-up back because my zipper sewing techniques sucked. For me, they were never straight, always crooked. Being on the show, you have to try to push yourself to do as good as you can. If it had never been for project runway, I never would have stepped up and made more professional looking garments.