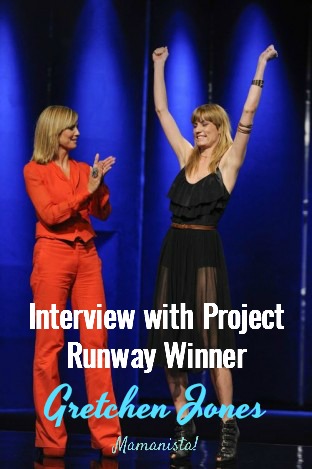 Along with what seems like most of the online fans of Project Runway, I am a bit in shock about the judges’ decision in last Thursday’s finale episode. If you missed it, full episodes are available at MyLifetime.com.

Lifetime gave me a chance to interview Gretchen Jones, as well as Andy and Mondo (to follow in a separate post).

What I really would love to do is interview the judges and ask them, “What were you thinking?” 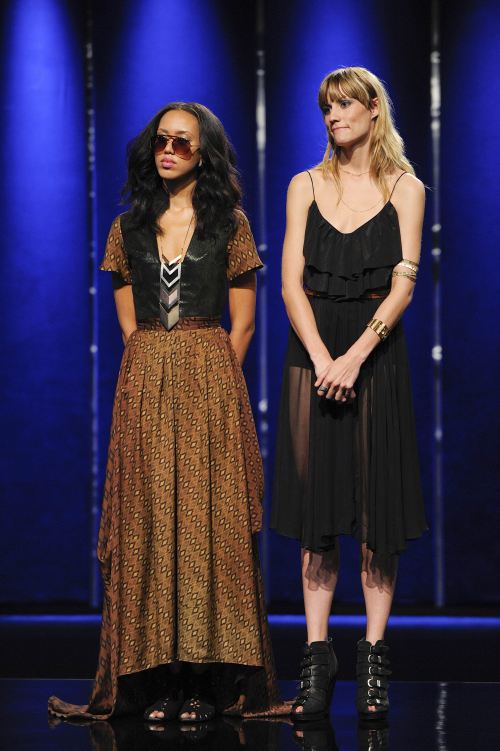 Although I never quite bought Gretchen  as the show’s “villain”, to me she just seemed not very socially tuned-in, I also never enjoyed her fashion.

Of course, fashion is subjective. To be honest, the southwestern-artisan-with-a-pottery-studio aesthetic (or as a commenter on Project Rungay phrased it, “the white woman posing as an Indian”) does not really excite me.

Still, I was under the impression after watching eight seasons of Project Runway that they were searching for a designer who put on an innovative and exciting show with well-designed and interesting clothes.  “Wearable” and “saleable” were always leveled as criticisms in past seasons, not as a justification for picking the winner.  And if we are supposed to take the clothes “as presented” (implied in the critique of Mondo), I am still trying to figure out how “Granny panties” are on-trend or a leather blazer with very little underneath is “wearable”…but I guess that is why I am not a buyer for Saks.

Designers in several seasons past have won with collections that I never would, or could, wear. Still, I “got” what was so special about their work.  Gretchen’s work seemed bland and derivative.  Never has a win so perplexed me.

With a few other interviewers, I chatted with Gretchen and found out that she is a smart, articulate businesswoman. Despite a reputation as the show’s “rhymes with witch”, Gretchen is adamant that she only talked about the other designers’ work, never attacking them on a personal level.  Gretchen shared her thoughts about the final judging and why she was so happy to have Michael Kors in her corner. Above all else, it seems that Gretchen was a truly savvy reality-show contest.

What I really wanted to ask Gretchen is why does she design clothes that make 5’9″, beautiful, willowy, 20 year-old women look like pear-shaped, middle-aged women in mom jeans?  But I couldn’t think of a non-confrontational way to phrase that.

So, this is what I, and other interviewers, asked her instead:

Jen from Digital Spy: You have a very wearable collection? Is that your natural aesthetic?

Gretchen: It is very much my aesthetic – my clothes, as a designer, are to be sold and worn. I create first and foremost for the modern woman and I think that a modern woman wants pieces that can integrate into her wardrobe that they really are indulging in something that makes them feel pretty. But I also want it to be unique enough that it is worth the time and effort to try on and purchase. I think that ready-to-wear is where fashion is and has been heading for quite some time now.

Candace of Mamanista: What do you feel is unique about your collection?

Gretchen: I certainly think the jewelry was very unique to my aesthetic and I think that in the wardrobe of the everyday woman that’s a specialty piece. I think the dresses were all really accessible but they were just a little bit special…I would consider “identity pieces” for a woman.  Doing hand knitwear that was hand-dyed and made locally by local artisans…I think those are very special pieces that I intended to be very representative of the things that you would love to put on.

Candace: What role do you think styling played in presenting your collection?

Gretchen: I think that styling for all designers at all times plays a much stronger role than we give credit to.  The reason why hair and makeup stylists have a huge industry is because the vision of garments or a collection isn’t truly realized without proper styling. I certainly learned through these experiences that I have to stick with my guns and stick with my gut and represent to my consumer the fantasy of what you’re buying into and not just the reality. There is a big difference between what you represent on a wholesale level to a buyer-based and what you are showing on a platform like a runway. Having the feedback that I was able to get from the judges, really enabled me to embody what I think of as my customer in a way that I was maybe a little apprehensive to do or a little bit timid to go all that way. And I am really grateful for being pushed to go.

Paulette from ET online: Can you talk about what it was like watching the judges debate between you and Mondo last night?

Gretchen: The people that I reached were the ones that I was really hoping to. I really wanted Nina and Michael to be impressed and I felt like they are both representative of type of people I need—I need fashion editors to believe in me and to want to see more from me and I wanted the respect of a fellow designer that I admire and who has a career that I aim to aspire to.

Paulette: How did you feel about the way that you were portrayed on television?

Going on the show there is risk involved and we say what we say and it is television that needs to be provoking and make you want to watch. I think that the reality of the situation is that I answered the questions thoughtfully and carefully and there is a difference between how I feel about people on a personal level and how I felt about my competition and their aesthetics and their point of view and perspective and I think it is important to be able to separate those two because I think in fashion you are lucky if you get to know the person behind the work and that is very different from what the work is.  I was being honest about how I felt about what was being presented. And I was also being honest about the people I was there with and I tried to be open and learn and grow and have fun with the people I competed against but I also wanted to win. I think that is an important distinction that at times is not being portrayed.

Louis from Movieline: You seemed to be able to guess what the judges would think. How did you grade your collection?

First and foremost, I felt like really the win for all the finalists is the opportunity to present a whole collection – that really gives not only the viewers but the judges a true identity behind what we are as designers and our potential as designers and I think I represented in a manner true to me and not what I was trying to show the judges. And I think the two other designers, Mondo and Andy, were very true to themselves, too. And it really represented the diversity and range within the three of us.

Jen: What can we plan to see from you in the future?

Gretchen:  I kind of have gone through a complete phoenix rising through the ashes moment. What’s more important than just immediately producing for me is taking my time, being thoughtful and being diligent about creating a successful business out of this.  First and foremost, fashion is clothing. I know that I am still very young and have a lot to learn. I intend on moving to New York City at the beginning of the year and I am to be in a mentorship with a designer of the caliber that Michael Kors is. And I want to take the time to write a good and healthy business plan so I can be monetarily successful and not just on a face level.

Louis : You were a particularly dynamic presence – when you watched, did you think, “Oh, I didn’t mean to say it that way?”

The things that I regret in life are the things I don’t do, rather than the things I did. Having the opportunity to see myself articulate […] really reminded me that vulnerability is important and that you can be honest in a way that is kind.  But I also feel like I was fighting for my life, so to speak, and I did the best I could given those circumstances. And I really wouldn’t do anything differently. I did the best I could.

Louis: Were you upset to see Heidi being the adversarial force during the judges deliberations?

No, because I kind of intuitively knew that she certainly believed in me as a designer but she had her favorite but that wasn’t me. I think the beauty with fashion and design and art is that we all have opinions and I think there is a big difference between your opinion or your taste and good design. Good design comes in many different faces but what somebody personally likes is different. And I knew that she was a fan of Mondo. What was important to me was to reach outside of that and create a collection that she could look at objectively.

Louis: What about this season has made it a craze?

I feel very grateful to be a part of it. I think the reason why there is a craze is because the designers that participated this year were willing to be really vulnerable and show themselves for who they really were. I think that’s a rarity on reality television these days.  I know that at times I wasn’t my greatest and at times I was better than I expected and I think that vulnerability shines through and it created a great following for each of us. It will enable all of us to work away with much more success in store than any of us would have been able to obtain if why had been closed off or reserved.