Once again, Heidi, love that Teutonic goddess, is flogging her New Balance line.

The first twist is that they have to run for the leadership positions.  Everyone runs really fast because no one wants to be paired with Bert.

I bet when they signed the releases, the designers weren’t counting on this.

Before anyone’s New Balance sneakers hit the ground, Cecelia has a chat with Tim.  She wants to go home. Heidi pulls her scary mommy face and tells her that if she doesn’t want the opportunity, she’s free to go.

I’m reminded of when my husband was at Officer Candidate School: a candidate could “ring the bell” and leave.

Cecelia can’t cut it in boot camp for designers and feels it wouldn’t be fair to other designers to be partnered with a designer who doesn’t have her heart in it.  Somewhere, Julie has just thrown a heavy object at her television set.

So, Cecelia leaves before the race and…they’re off!

It’s Joshua out there for the early lead, followed by Bryce, Anthony Ryan, and Viktor coming up the outside.  They are being chased by the feat of being partnered with Bert. Bryce runs extra fast knowing that good teammates are his only chance and, oh! Olivier, encumbered by extra vowels, is down! The ladies don’t even stand a chance.

Joshua knows which way the wind blows and grabs Anya right off the bat.  Now that he has the most stylish person in the entire group, he needs someone who can sew.  So, he chooses Becky in the next round.

In order to get the most work out of Becky, Joshua doesn’t want her to bother her little head about “designing”.  Every suggestion Becky makes is shut down by Joshua and Anya.  The gay queen and the beauty queen huddle over their little tablet and occasionally glance up to snicker at Becky and fill her in that “leggings are over”.

In the workroom, Joshua says he doesn’t “need Becky to be thinking or designing” and Becky feels like she’s “the intern that is there to sew”. Fashionable or not, she’s certainly a perceptive gal.

During Tim’s critique, he suggests that Becky’s contribution could be “so trivilialized” that she is “thrown under the bus”. So, Becky decides to make a stand. Joshua, unable to stand anyone who isn’t a size 2 getting uppity with him, tells her that she makes “dowdy” dresses.

Joshua probably thought he was the queen big but he just comes off as the king of jerks. 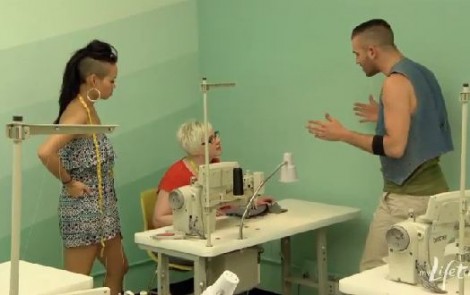 Anya plays good cop and pretends like she totally wasn’t just giggling along with the other mean girl so that the nerdy girl with glasses will do her sewing homework for her.

Since Joshua is now fully invested in his role as a 13 year-old girl, he follows into the women’s bathroom and gives Becky an apology so Becky will keep sewing. Becky isn’t fooled for a second but she doesn’t want to go home and keeps sewing. Cinder-Becky.

Bryce is running from his own miserable past performance, having almost been auf’d several times in the past. Wisely, he chooses the winner of the last challenge although, honestly, I think he should have chosen someone with a stronger aesthetic.

His next round draft is the equally doomed Danielle.

I am rooting for Kimberly but she is more stylish and highly competent than she is a visionary…and  Bryce could use some vision right now.

Especially when Heidi walks in and, seeing a cowl hoodie Bryce has planned, asks,  “Is that really cool?”  Laura thinks Bryce is a “sunken ship” and should have thrown the race so he wouldn’t have been a group leader.

Bert actually turned out to be the least of their worries but I’ll get to that in a minute. Anthony is happy to grab Laura as a partner again and then gets stuck with Bert in the second round.

To Bert’s credit, he seems to initially try to play ball, making sketch after sketch.  But Bert’s burned too many of those bridges.  Anthony and Laura shut him down at every turn as old and out of date.

As usual, it takes just a few snubs for Bert to turn defensive and he remarks, “it takes me a long time to remember their names because they’re not that significant”.

In the workroom with Tim and Heidi, Anthony graciously lets Laura do the talking.  There is some discussion of a “Grecian goddess high-waisted romper,” which sounds almost as bad as it ended up looking.  And we get the joy of Heidi saying, “badonkadonk” and suggesting that the three models can wear any of the three designs.

Anthony and Laura and Bert have what actually sounds like a very mature conversation, especially when compared to Team Mean Girls. Bert does not want to compromise and Anthony and Laura warn him that they expect he’ll take responsibility for this and he agrees.

Viktor grabs a now-conscious Oliver on the first round and I worry that this will be a yawn fest. Well, I don’t really worry because I can’t get too excited about either of them.  For his third team member, Viktor gets to choose anyone who has been eliminated previously as his second pick.

Of course, this is not at all fair but it is interesting.  Viktor claims, at least, to choose Josh C. because he would appreciate the opportunity for growth.

I support his decision because Josh C. uttered what should become the immortal phrase, “The Klum of Doom”.

Back at the Bat Cave…Olivier and Viktor are among the first to vocalize how confusing this challenge is.  Olivier reminds Viktor to “think fashion” instead of workout gear, which shows he’s watched the show before.  Heidi did say it could be a dress, a suit, anything…

…but then walks into the workroom and asks, “…but could she wear sneakers with this?”

So, once again, this is a challenge to design athletic-wear, without consideration of actually exercising, that is chic and yet sporty, and fashionable but goes with sneakers.

Heidi lifts her absurdly long legs to slip on Olivier’s “Auntie Em” skirt. She is not a fan but Olivier sticks to his guns and likes it, later, on his model. 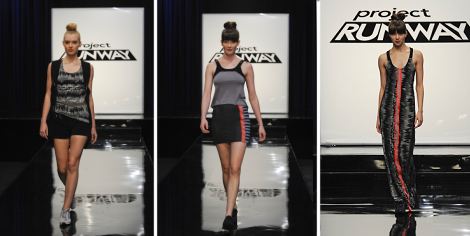 Joshua, Anya, Becky decide that a pop of color will “tie together” their collection. It is a bit much but it certainly does add to the cohesion.

My favorite is Anya’s maxi, which is bold and sexy. Becky’s outfit is a too-short and tight yoga skirt and a rather sad-looking tank top.

Heidi notes, “I gave you more time and you bedazzled.” Becky’s outfit takes some criticism and Joshua actually takes some responsibility for the design of Becky’s outfit but blames the top on Becky.  Joshua tries to put a positive spin on things but Becky wants the truth to come out. The truth may set you free and be good for the complexion but I don’t think it is doing much for her chances. Her outfit was adequate and I think she should have let Joshua spin a happy tale and take the blame and credit for the designs.

Heidi thinks these pieces are “saleable” and her eyes light up with dollar signs as the Flying Lizard’s version of “I Want Money” plays on the soundtrack in my head. 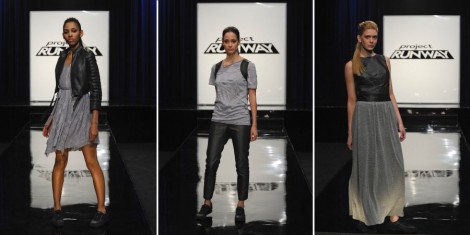 The judges praise the “road warrior” style of this collection by Viktor, Olivier, and Josh C. I find it a little drab, personally.  I didn’t love Josh’s “backpack top”, which got praise from the judges. Viktor can make some darn impressive clothes, though, and the jacket is a hit with the judges. 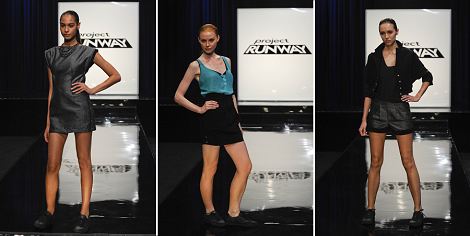 Bryce, Kimberly, and Danielle make clothes that do not read athletic wear to me at all. Bryce makes a decent enough dress but it reminds me a bit of Viktor’s from the last challenge. Kimberly shows off her skills and turns in an excellent jacket (no pants! take that, Nina!).

And Danielle? Oh, dear. Once again we get a sad chiffon top.  Each sadder than the last. The praise on her first one must have blinded her. Fortunately for her, there is a worse garment on the runway. 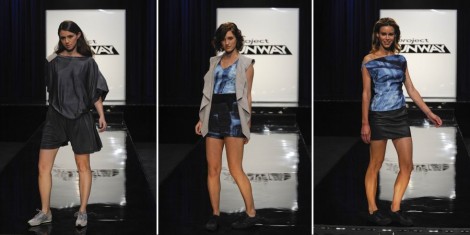 Anthony’s sad little neglige looks something you might wear while getting your hair cut, while giving birth. I think this may be the ugliest thing that has walked the runway on this show.

Bert’s is, by comparison, chic. Nothing amazing but it is at least decent.  The judges say, and I agree, that Anthony should have focused less on Bert and more on himself.

Of course, Bert has to act like a jerk lest people start to like him again.  Unless there was some editing black magic, Bert actually does a double fisted “Yes!” pump as the judges criticize Anthony and Laura. 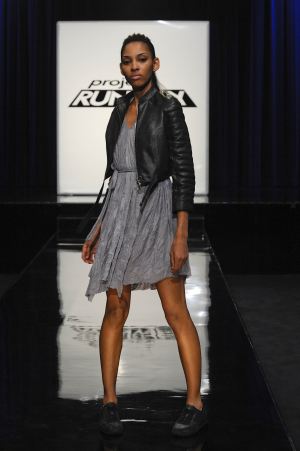 Viktor’s jacket is declared the winner.  I guess you put it on after you workout to avoid a chill? 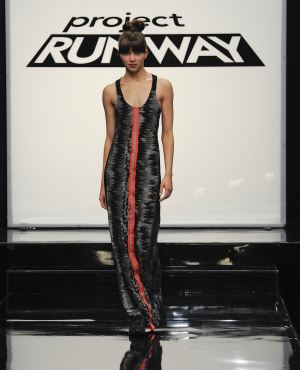 This fun maxi dress, which would get caught in any workout equipment and trip you up if you tried to run but nevertheless looks hot with the sneakers, that Anya designed and Becky helped sew means that…Josh won?

And, just to prove that even in victory you can be a sore loser, Josh hugs Anya, psuedo-graciously calls over his seamstress…and calls her Kimberly? What?

I’ve pegged Danielle and Bryce as the next to go.  Bryce surprised me but Danielle did not. She’s gone from a well-made chiffon top to a sloppy chiffon top to a hot mess of a shiffon top. She’s shown no ideas, no range, no vision and her skill seems to be deteriorating under the artificial pressure. 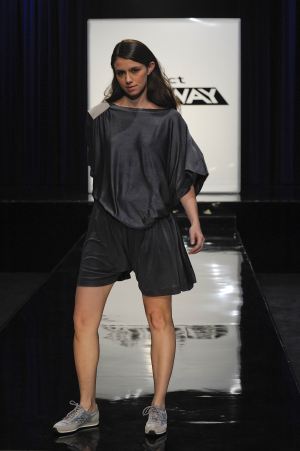 Compared to this, though? This looks like what my daughter would make with sheets and some tape…if she stole her sheets from Barry Manilow.

The judges actually openly argue about whether or not the judging is week by week or cumulative.  Heid points out that “one week you are in, and the next week…” But Michael and Nina have visions of the elegance of Anthony’s previous efforts dancing in their heads and want to give him another chance.

A sobbing Anthony is informed by Heidi that she wanted him out but he will survive to sew another week.

In the green room, Laura is relieved to see her teammate emerge: “We went through so much!” (What is Bert, a natural disaster?)

That means Danielle must pack-up her sea-foam palette of chiffon and go home.

Next week: Something involving kids…I hope the designers are on their best behavior.