Heidi comes out in a gorgeous dress that I could never ever wear and announces the challenge: Make a dress for Nina. 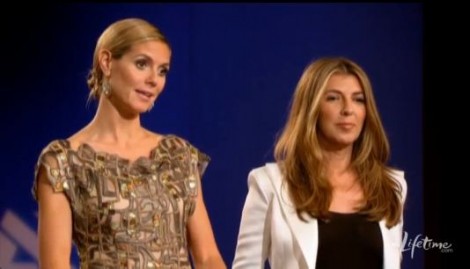 Heidi: “I would be a little nervous if I were you. Nina will CUT YOU.” 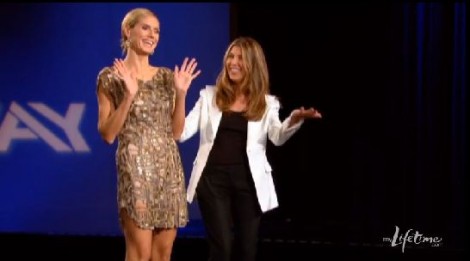 Heidi: “The designers have designed for me lots of times…but never for Nina!”
Nina: “That’s right, this will be fun! FUN! FUN, I say!”
Heidi: “I’m executive producer… why should I always have to wear these crappy, sewn in one day, outfits? But seriously, folks, Nina. will. CUT YOU.”

This is a pretty good challenge but, like a garment designed by a contestant, too many elements are added. Remember, take one thing off before you leave the house!

Not only is this an outfit for Nina but it also must be a “day to evening” look…for a fashion editor who would not be caught dead wearing the same outfit to the office and an evening industry event.  And it must photograph well because it is going to be in an editorial photo shoot.  Plus it will be in an advertisement on taxi cabs.  Make it work, people!

The designers mostly seem to have the right attitude: that this is a great opportunity for feedback from Nina.

They are all nervous in varying degrees (a sign they are awake) depending on how closely they think their style relates to Nina.

Nina wants something that is tailored, streamlined, with no pleats, no colors, no patterns, and so on. Perhaps realizing that she is going to get a runway of boring, minimalist, neutral-toned garments walking the runway, she has Tim deliver a last minute addendum: Nina doesn’t want to see a runway of gray!  Let’s confuse the designers some more!

Nina consults with the designers on their sketches and the designers eagerly lap up Nina’s critiques.  It becomes clear who is going to struggle with meeting Nina’s parameters as the client and maintaining their own style to stay competitive.

Anya is worried about translating her love of color and pattern into something Nina would wear. Kimberly, afraid that she has become known for pants, sketches a dress…and is summarily commanded to produce pants. Nina is concerned that Cecilia’s look is “dated” and something out of “Dynasty”. Cecilia wonders if Nina means Tang or Qing.

The real drama happens at Mood.  Armed with less money than Nina probably spends on skim lattes in a week, and no second chances, the designers struggle to find luxe fabrics that aren’t colors, aren’t patterns, but aren’t boring or gray. Danielle can’t find olive and goes for a garish kelly green. Anthony and Becky have same, distinctive fabric (probably because Becky picked it up off the cutting table).  Anya takes a risk on a  mustard-colored silk that wouldn’t look good on anyone besides an Asian beauty queen. 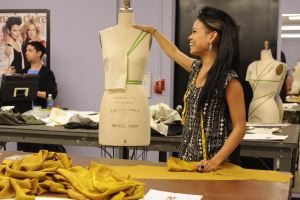 Nina comes into the workroom to check on the progress and she is not kidding around.  Every time Danielle opens her mouth, Nina shoots her down with a “no”.

Several designers are asked if there is a “Plan B”. Unfortunately, this being a game show, they are stuck with the fabric choices, which are causing most of the issues.  In real life, they would have shown their high-powered client the swatches and scrambled back to get different fabric if necessary, of course.

The other big scandal? Anya gets sewing help from Laura, to great effect, and Julie gets help from Cecilia, with less positive results.  What do you think? Cheating or collaboration? The outfits were mostly finished.  Part of the competition is to see how the designers work under time pressure but it is not reflective of the real world, where designers have seamstresses and more than 24 hours to design, manufacture, fit, and style  a garment. 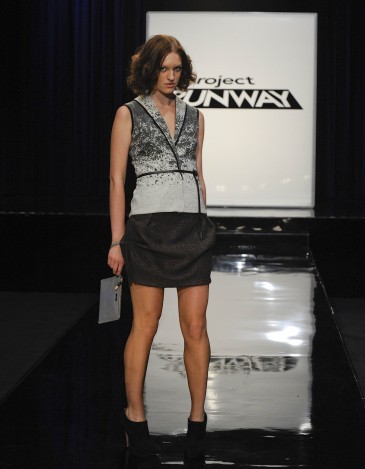 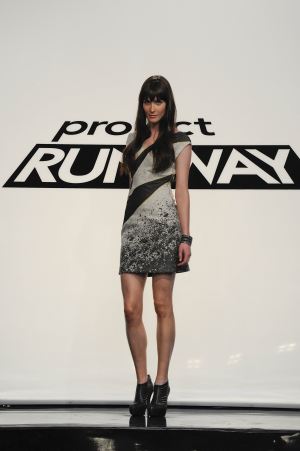 Anthony and Becky: I’m surprised but I think Becky made better use of THE FABRIC than Anthony.  Anthony’s looks like something I could buy at Macy’s and wear when I was teaching. And why does his model look so angry? Becky’s is far more chic but the silhouette is simple and the fabric is doing all of the work.  It might have scraped into the top 3 if the judges hadn’t seen the exact fabric moments earlier. 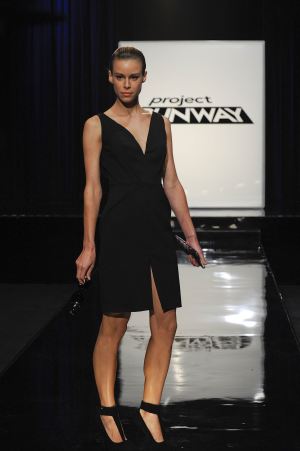 Bert: Yawn. He, thankfully, toned down the plunging neckline but this is just a little black dress. 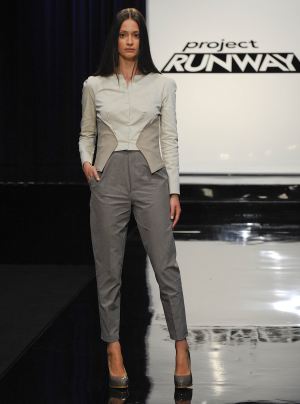 Olivier: He didn’t get much air time so I knew he would be in the middle.  There is some interest to this look but it is just so very gray and unflattering. 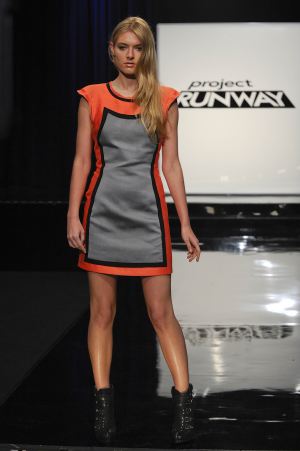 Joshua: I think Joshua’s was the stand out of the middle entries…but he did not keep Nina closely enough in mind. 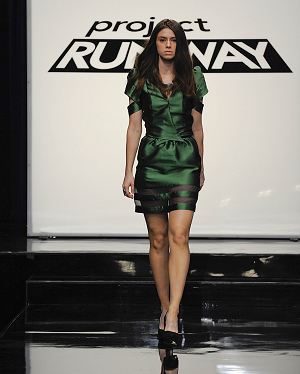 Laura decided to use her time to make herself an outfit for her next Christmas party.  It is lovely but it is most definitely not Nina at the office. Now that Laura is no longer reminding us at every turn about how privileged she is, I’m starting to like her. And her clothes. Darn it. 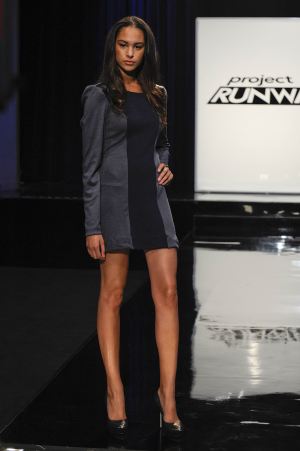 Bryce didn’t have a bad idea but the execution was awful. Maybe he forgot how to cut on the grain. Even if he had done a better job with the hem, it wasn’t all that interesting of a design.  I still think Bryce tortured Fallene, though, so I am hoping he goes home soon. 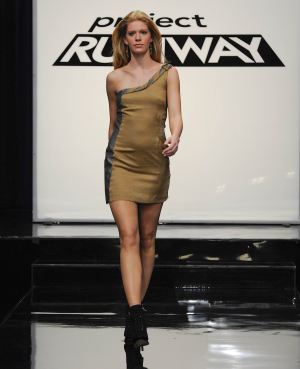 Cecilia evidently thought she was designing for Lifetime’s next time slot: Russian Dolls. During the judging we find out that, according to Joanna Cole, Nina’s co-workers would go gossip behind her back if she wore this.  Apparently Marie Claire is staffed by junior high schoolers who watch Mean Girls every night. 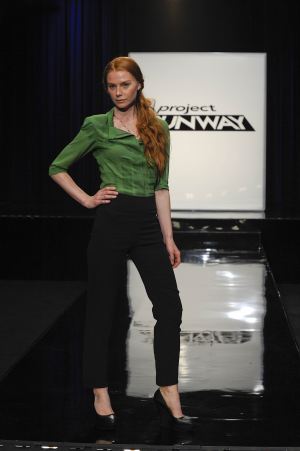 Danielle makes the same chiffon top for which she was praised in the previous challenge.  This time, however, it is in kelly green and is less translucent. The judges can’t see through the top to the construction this time but, thankfully, they see right through the lack of fashion. Put a black crepe jacket on and this is every middle-management working girl’s ensemble in the early 90s. Michael Kors says it is “Joan Crawford going to a St. Patrick’s Day party”. Joanna says a housewife would wear that while pureeing acorn squash and even Michael Kors flinches at Joanna’s level of meanness. 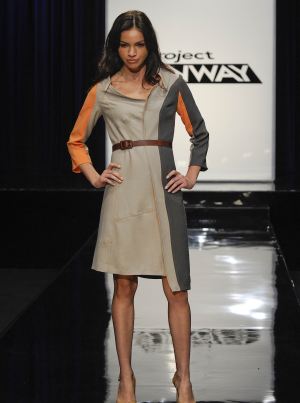 The other contestants aren’t sure if Julie is in the top or bottom.  I didn’t think it was a top three look but I certainly did not think it was in the bottom, either.  Julie had some interesting ideas and came up with an architectural piece.  The problem is that when you use asymmetry, it has to be impeccable.  Otherwise it looks unintentional and sloppy.  The fabric looks cheap, the collar is a hot mess, and the fit is pulling in odd spots.  But, at least we now know what a “droat” is. 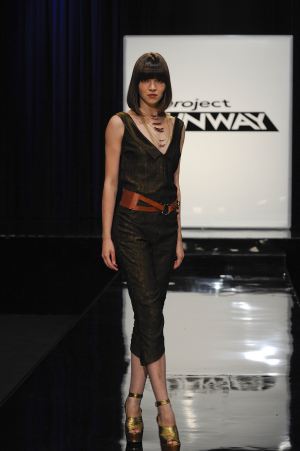 Anya was saved by Joshua’s suggestion to dye the garment. The result was a more olive color.  I could never, ever have worn this.  Even in my size 2 days. Still, it is chic.  Nina is impressed by Anya’s course-correction. Heidi says that Nina has never worn something like this before but Nina would.  This comment makes me think it is a lock for the win but…the belt makes the outfit and you can’t have a pre-made accessory from the Piperlime wall doing all the work in a design competition.   If she had made the belt, then I would have thought this was a win. Anya’s recently self-taught sewing skills may mean that her more ambitious designs won’t get finished once Laura stops helping her…but I still think Anya will survive for quite a while longer. 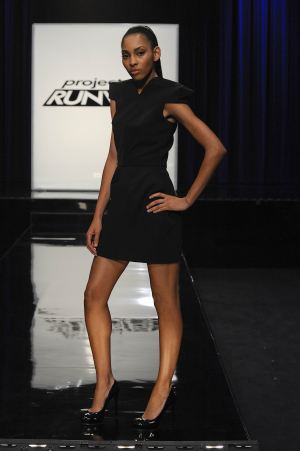 Viktor made cocktail separates with an interesting silhouette and quality construction and yawn… Despite his kissing-up during the judging, I was sure this was just too boring to win.  Nina might actually wear but as a design challenge winner it lacked oomph.  Viktor wisely keeps his mouth shut about the alleged “cheating”.  He’s a sour little fellow but he has some flair and talent. 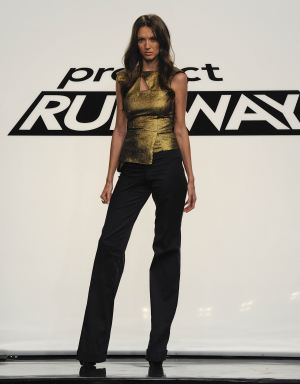 Kimberly‘s outfit looks beautiful.  The top looks like what Julie tried (and failed) to do with the coat.  I know a lot of the commentariat hated the fabric but I think the texture makes the gold look luxe, not cheap.  Kimberly is one smart cookie and she gets the Nina styling perfectly.  And the outfit actually could go from day to night, assuming Nina would ever be caught wearing the same outfit more than 8 hours in a row.  Joanna makes her one non-nasty remark of the night and talks about the transformative power of good fashion. Even in the most mundane of circumstances, this top might make you feel as if something special is about to happen.

Julie is out, which surprised me because they usually choose interesting but failed over boring and/or tacky…and Cecilia’s was both.  Cecilia admits to the other designers that she would have been okay going home, basically painting a huge target on her back.

Kimberly for the (w)in! Now that Bert has imploded and is acting cranky and gassy, I’m rooting for Kimberly.  She’s fun, professional, and smart.  I just hope this win doesn’t convince it is a good idea to use gold in all her designs.