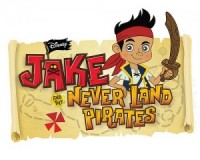 Little girls adore the Disney Princesses, and I was no exception. I have so many fond memories of watching Disney movies with my mom. In fact, when I found out I was having a boy, I actually remembering thinking that it was a shame I wouldn’t be able to share my love of Disney with him. Now I’m a mom to two boys, and I’ve discovered that Disney has just as much to offer boys as girls.

My son adores Lightning McQueen and the CARS characters as well as Woody and Buzz from Toy Story. He loves adventure, and his favorite TV show is Disney Junior’s Jake and the Never Land Pirates.

Jake and the Never Land Pirates is the #1 cable series for Boys 2-5 and on track to be the Disney Channel’s #1 preschool series ever.  The show currently is among one of the most co-viewed preschool series, with 45% of moms watching with their preschooler. We set our DVR to record Jake, and I watch it with my son after dinner.

Two of the main characters, Captain Hook, Tick-Tock the Crocodile and Mr. Smee, are familiar to me from my own childhood viewings of Disney’s classic Peter Pan.  A crew of kid pirates (Jake, Izzy and Cubby) outwit these classic Disney villains on music-filled adventures that teach teamwork, math/counting and problem-solving. At the end of every adventure, Jake receives gold doubloons, which the crew counts. Every episode includes at least one song too.

I had the chance to preview the December holiday episode, which will be followed in January by the debut of the first-ever 45-minute series special which will mark the first time Peter Pan is seen in the series and the season two premiere. In the holiday episode of Jake and the Never Land Pirates, titled It’s A Winter Never Land! / Hook On Ice, Jake, Izzy and Cubby find that Peter Pan has left the crew some presents and a tree to celebrate Winter Treasure Day, and Captain Hook invites Jake and the crew on a winter treasure hunt. The episode premieres FRIDAY, DECEMBER 2 (8:30-9:00 a.m., ET/PT) on Disney Channel.

If you have a little boy, be sure to tune in or set your DVR to catch this special episode. Want to learn more? Check out this exclusive clip below:

Disclosure: I received a preview copy of the holiday episode as well as a gift bag full of Jake merchandise, including a DVD and a musical CD in order to write this review. However, all opinions are my own.