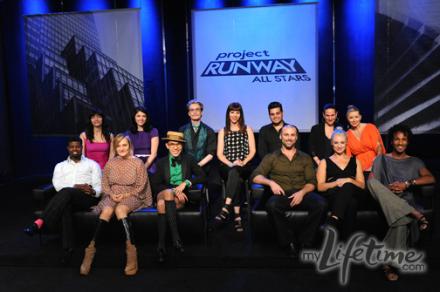 Whew! That was a relief, wasn’t it? I was beginning to feel like a crazy old fogey.

In MY day, Project Runway contestants had talent AND drama AND vision. Austin could cut a gorgeous dress and then walk the runway in it. Backwards. And in HEELS.

Okay, maybe that was Ginger Rogers but still…I’m right, aren’t I? That last crop was a bit lacking, a few decent pieces not withstanding.

Like a bunch of wacky old friends who show up to crash on your couch and drink up your best wine, the Project Runway All Stars are here!

There was fashion! banter! zany behavior! and lots and lots of soundbites!  These aren’t just fashion veterans, these are reality show veterans.

Overall, the episode was cut WAY too frenetically. They showed the outfits the designers brought with them for about 3 milliseconds. Yes, Mondo is adorable, and yes, Austin is entertaining in the way I imagine a meerkat on some serious uppers would be, but how many shots of that do we need? 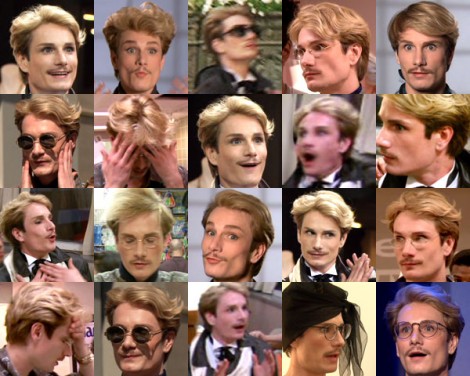 What is Austin doing on this show, anyway? I mean, I get that he was the original “robbed” contestant but doesn’t he have a very successful career to attend to? Is he just that addicted to reality show stardom?

Also, let me get this out of the way, Joanna Coles was not as terrible of a mentor as I expected. Sure, she’s no Tim Gunn. However, I do think the designers will benefit from a fresh perspective.  Plus, I kind of sympathize with her…not the whole amazingly chic wardrobe and lots of staff hanging on my every word part…but the tendency to say things that sound funny in my head but come out as rather awkward and insulting.

Like, for example, “You’re not going to spit on me, are you?” 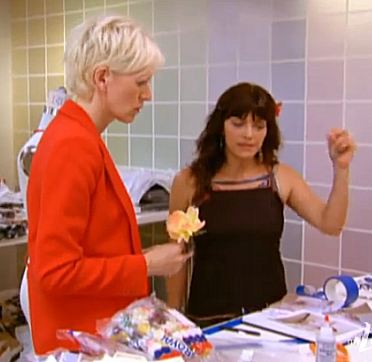 Oh, Elisa, you didn’t really think you were anything other than canon fodder so our favorites don’t get the boot too soon? I know Elisa has a fan base but her process over product style of working just is not suited for this sort of environment. 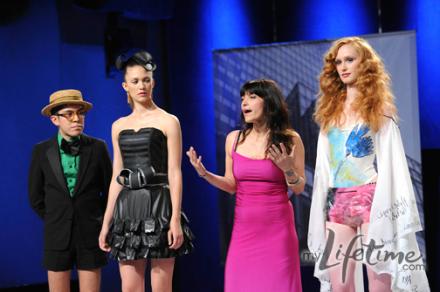 Elisa, when even Mondo is struggling to keep a straight face, you’ve past eccentric several miles back and are well into Wackadooville. 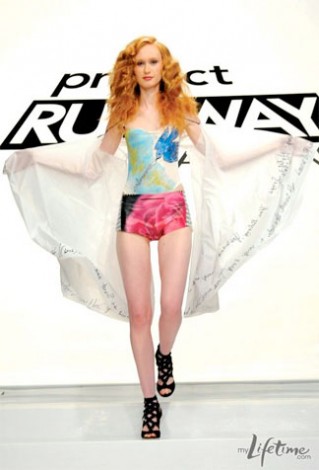 I was fine with the judges but boy would I have loved to have Michael Kors weigh in on this poet, stripper, bird-themed superhero.

And I do like that the designers all have a clean slate. When I was teaching, I used to show my kids the blank grade book every quarter. Almost everyone deserves a chance to start fresh, don’t you think?

I don’t have a ton of time so I am just going to hit the highlights. 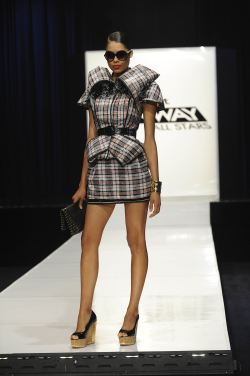 Congratulations, Rami! Can I be honest? I don’t really remember Rami all that well. I know he is adorable and has a big fan base and, obviously, he is talented…but I’m drawing a blank on his previous creations and need to go look them up.

Apparently, like a few other designers, he is fighting the previous image of his work.  He is known for draping and so he went for highly-constructed.

This really isn’t “my thing” but it is interesting and well done. More Fashion with a capital “F” than the other top contender for this challenge. 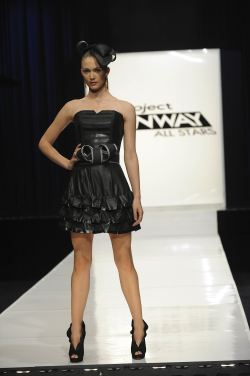 Mondo is also trying to counter preconceived notions…nary a print or bright color in sight. Plus, this is seriously toned down on both the design and styling. I fear that Mondo may be fighting the last battle and go too far into wearability. This is surprisingly beautiful for something made out of dollar store finds and, made out of higher-end fabrics, could easily hang on the rack at a high-end department store like Neiman Marcus or Nordstroms. These judges seem to be looking for something with more impact, though, which we know Mondo can deliver. 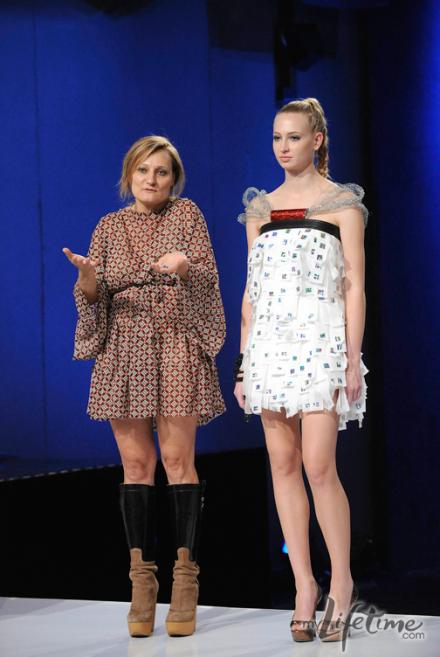 Even Gordana is at a loss for words. Here, let Mondo help you: “Gordana’s model looks like a piñata, I hope she’s full of candy.” It is the red detail at the collar that is killing this one for me. 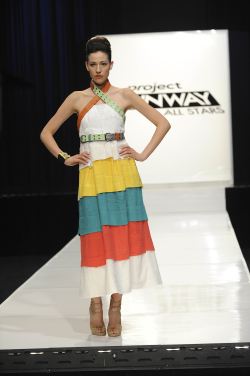 Oh, Sweet Pea. You are lucky Elisa stuck her foot in her mouth because this looks like someone tried to make an Old Navy maxi beach dress from 2005 with dollar store dishtowels…and fishing line…and no needles…and two left hands. 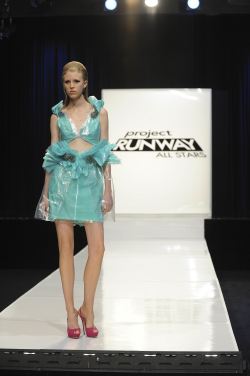 Austin, you might have been better off if the glue gun had melted the whole thing. My five year old wants the homemade Mermaid Barbie costume back. I actually like the color and the pot scrubbers look kind of cute, at least from far away…but the design and the flounces and the… I just can’t. 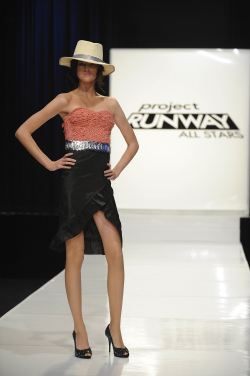 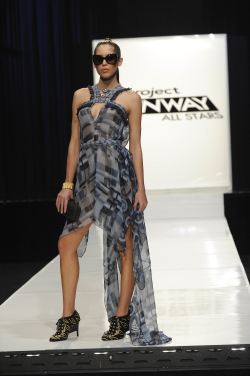 Jerrell made a rather dramatic handkerchief dress out of handkerchiefs. While it is impressive that it looks so chic, he really just took some cheap, sheer fabric and recreated his inspiration dress. There’s little innovation here and, frankly, it looks like an Anya creation. I like a lot of what Jerrell does and he definitely has the chops to make a run for it…but he needs to bring the A game if he is going to beat some of the other top contenders. 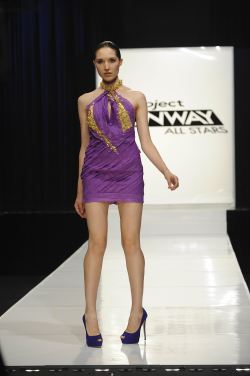 Anthony dear, don’t ever change. You are so very funny. That is why it is disappointing you probably won’t be around very long. While others are second guessing themselves from their regular season you are steaming full-tacky ahead. Russian Mafia trophy wife. 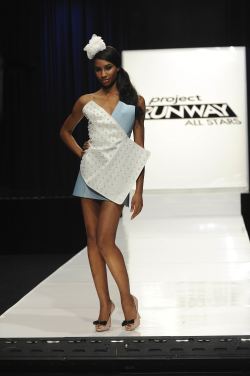 I’m ambivalent. It seemed a little too literal of a period piece but that might just be the styling. The bath puff on the head is not helping her cause. Also, the bath mat just seems to be stapled onto her. There is some interest there. I might have snipped the suctions off the mat and sewed them onto another fabric as little pearls or pailletes. Kenley has never bothered me the way she rubs some people the wrong way. I think she is insecure and just has an unfortunate voice that makes people interpret everything she says in the worst possible light. I hope to see more from her. 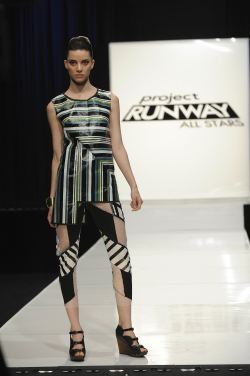 Mila went all Blade Runner and edgy with her color-blocking. Not really my thing and I am not a fan of the placement that seems to point directly to her fine china (thanks, Peach!). However, it is definitely interesting, well-made, and has a strong point of view.

Finally, let’s get to the mop-head twins. 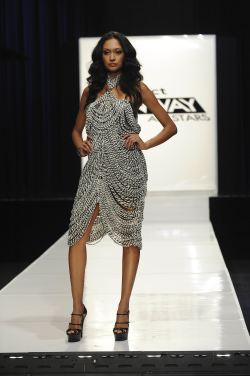 What is Michael C. even doing here? He seems competent enough, given time and instructions. But he just doesn’t have very original ideas or a whole lot of taste. She looks like the Scarlett O’Hara of Las Vegas. Instead of making a gown out of curtains, she went for the cocktail dress out of a mop. 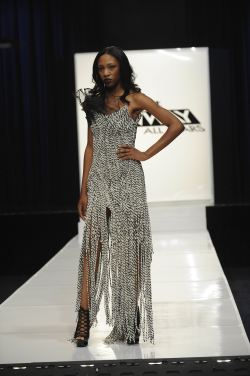 April’s effort is not bad…just looks a little heavy.

Will you be watching Project Runway Thursday (tonight) at 9/8c? What did you think of last week’s show?