Wasn’t the premier of Season 10 of Project Runway a whole lot of fun? I mean, yes, I am a rabid fangurl who writes for a subsite owned by the host television network but STILL. After 10 seasons (plus All Stars), I am capable of seeing the show objectively in its ups and downs and occasionally uneven glory. And this was GOOD TV and FUN FASHION, no?

Let me add that MY mom is a Granny and is WAAAYYY more stylish than that. (“Hi, mom!”) 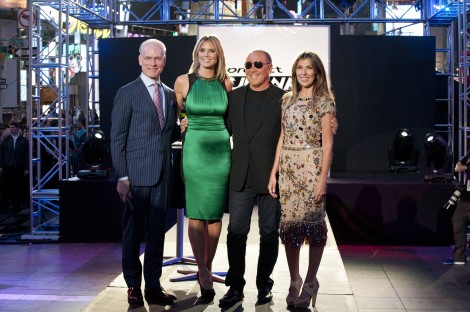 Tim is more kindly-concerned and dapper than ever, Michael Kors has taken his orange to new levels of intensity, and Nina looks FABULOUS and sparkly and I couldn’t take my eyes off her the whole time.

But Heidi, GIRL, can we talk? You usually look gorgeous. And I saw that photo you tweeted out of yourself in a bikini. And emerald green IS a striking color. And that bodice is interesting and flattering…BUT…tight satin is no one’s friend. Over at one of my favorite sites, they like to say, “Girl, that is not your dress”. In this case, this dress is giving one of the hottest supermodels a pooch and a visible belly button. This is not anyone’s dress. Burn that thing before it attacks again.

On to the designers! 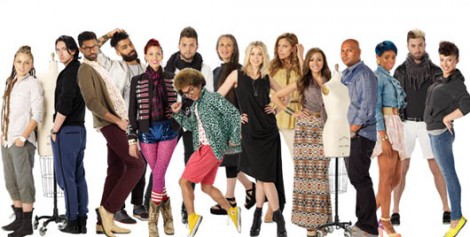 The designers have figured out that they not only need to bring the fashion to the casting call but also a TV-ready personality. After his pre-challenge dismissal last year, Gunnar Deatherage has a fresh rack of clothes and a completely horrendous new, Josh-like personality to match the drama (if not the tone) of his name. More on Pissy Polly later but I do think his shade-throwing is an act. Possibly even an act that his victim, Christopher, is in on. At least Christo-fur gives us one of the better lines of the night, deciding that Gunnar must have meant to audition for “Toddlers and Tiaras”.

Fortunately, this season no one is summarily dismissed before the first challenge. The challenge is to design a dress at home at leisure and then one to complement the dress in just one day.

Let’s look at the bottom, which is not stunning but surprisingly wearable for this early in the season, with one exception. 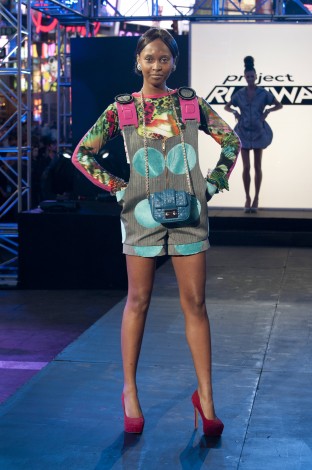 I would call Kooan Kosuke’s clothes a lot of things but “wearable” isn’t really at the top of the list. The kooks usually are there to liven up the first couple of episodes. Project Runway likes “interesting” and “edgy” but completely out there is usually weeded out shortly after incompetent.

There’s a post-apocalyptic, Tank Girl style to this jumper but with the patterned top and everything else going on in the styling, it just looks a bit junkyard, rummage sale. Still, the fit on the jumper is quite good. 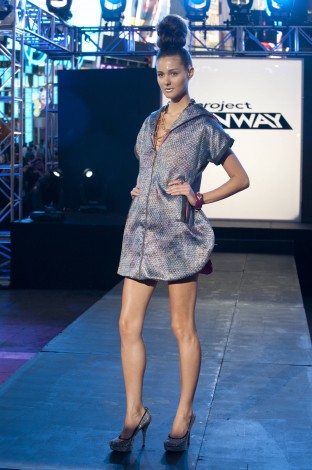 This has an interesting shape and shows a lot more focus than the first. I honestly thought he might have been safe with this but perhaps the judges just wanted to send a warning shot over his bow and draw out his personality a little more.

I wouldn’t be shocked if Koo-Koo-Kooan can pull it together. He has some actual talent. He is not just throwing random elements at his dresses. However, I think his style benefits from time to conceptualize and edit and a reality show just does not allow him to do that. 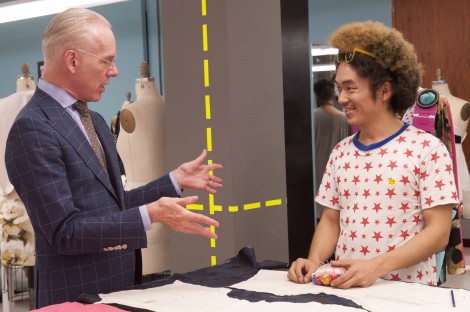 If you cannot explain your design to Tim, we are all very concerned.

As Kors said, “You don’t want it to be a joke.” Hopefully Kooan can maintain his perspective while conforming to the constraints of the challenges…though given that the unconventional materials challenge is next, I’m not sure how much “restraint” we’ll see.

Nina worries that Kooan really is just that wacky and Heidi, ever the champion of the quirky underdog argues that he was just nervous. Since wacky beats boring in the opening episodes, Kooan remains to provide anime-based humor. As he is leaving the runway, Kooan makes funny noise of relief and Heidi shrugs as if to say, “Okay, maybe he is just weird.” 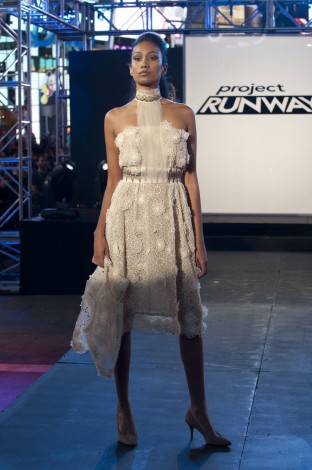 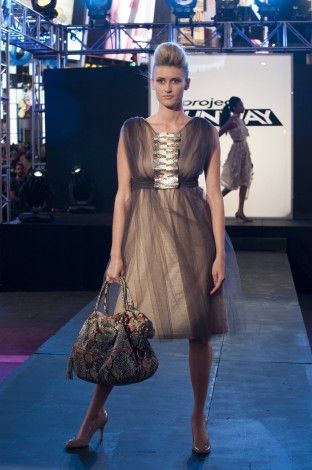 For someone who likes to play with vintage fabrics and dresses, Lantie sure seems to lack an understanding of how fabrics mix and match and move.

My five year old might take some spare tulle, belt it around a doll, and glue a piece of scrap fabric to it. Except my little girl would have made it fuchsia and lavender and added jewels and glitter so it would have at least been a cheerful, fun hot mess.

Nina labels it “horrifying” and Patricia Field calls her something between a stylist and a designer…”one step below design”. Ouch.

Despite having already gotten dinged for her little “bib-strip” fronts and wearing a dress with one herself, Lantie manages to convince the judges that not EVERY dress she designs has one (just 95% of them).

Nina likes that Lantie is “a fighter”. Kors whispers, “or delusional”. So, Lantie and her pre-approved personality live another day because Beatrice commits the combined sins of being dull and having no vision and acting like a sane human being. 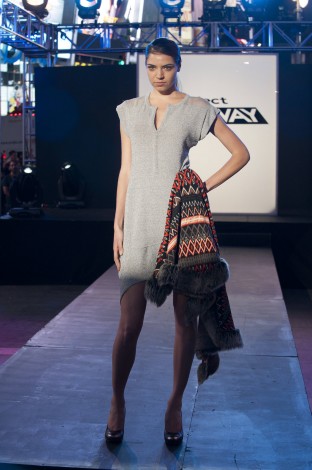 The piece she brought from home looks comfortable and somewhat stylish but it is unfortunately the color of dishwater and paired with a “cape” that looks like it smells of patchouli.

In the workroom, Beatrice mutters, “sewing is more difficult than I thought” and you just know this will not end well. 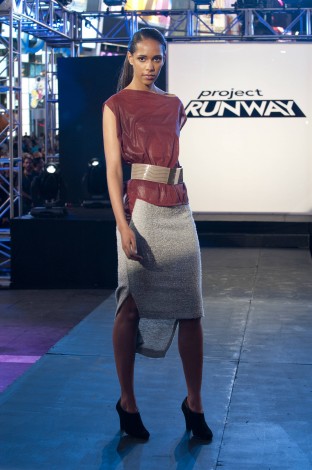 Not a total disaster just…yawn. And “knitwear” is not a style perspective. It is a material. If she had ditched the knits and gone for chic comfort or something… but once she was labeled as making “snuggies”, you knew she was getting the Auf’.

Onto the winners’ circle! 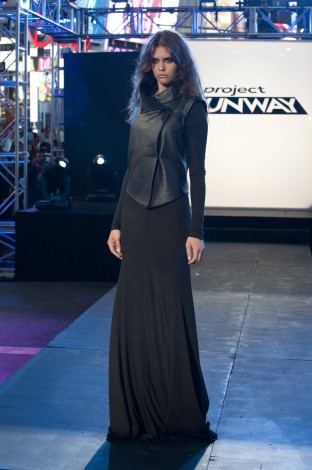 Melissa’s brand of modern goth surprisingly makes the top 3. Not that it isn’t skillfully done, with a clear perspective. Just that it is kind of subtle for a “show us what you’ve got” challenge. 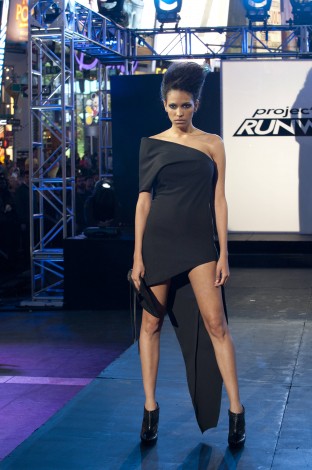 That is if a one-shoulder, mini-dress with a tail can be considered subtle. I think it was the leather jacket in the original piece that bumped her into the top three. I do appreciate “Happy April’s” work and look forward to seeing more (hopefully not ALL black, as the judges said) but I would have been more interested in discussing some of the “safe” pieces. 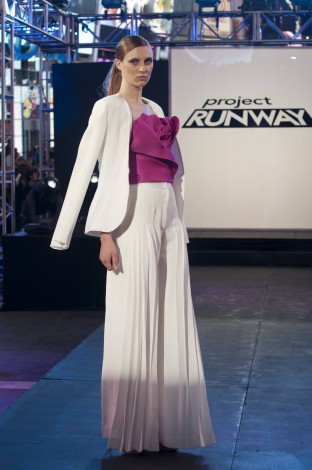 Ven Budhu is being heavily favored for the win by the Twitterazzi I saw last night. I think, perhaps, this entry fell just short of the win for being almost “too professional”. His work was so very polished and lovely and flowed so beautifully. He showed pants, a jacket, and a bustier and then paired it with a dress. 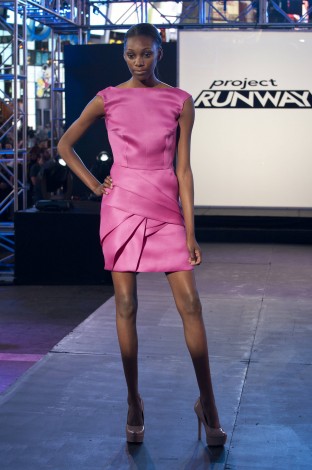 The fit up top is not perfect but it is not bad considering the fabric and the time constraints. And the folds on the skirt, while not exactly a brand-new idea, are masterfully done and perfectly call back to the bustier of the suit. Stunning, really. I strongly suspect Ven will rack up a few second places before an obvious challenge win for two reasons. One, the judges will favor something unusual that is less than perfect over Ven’s perfectly-executed but “rehearsed”-looking cool glamor. And, two, they know Ven is likely to go the distance and don’t want it to be a foregone conclusion or for him to sabotage himself with too many early wins in a row.

Tonight, the “interesting, if imperfect” award goes to our first winner, Christopher. 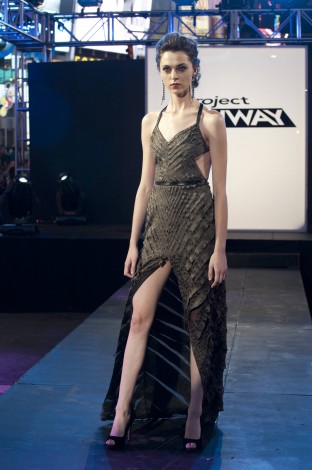 This is somewhat mystifying since the win seems to be based almost entirely on the dress Christopher brought with him. Like Lantie, Christopher started with a “granny fabric” but then works it into something delicate and lovely. It is reminiscent of Jay’s Chrysler building dress, which is still one of my favorite pieces of all time.

Even this gown is not without its problems. There is something weird going on at the top of the slit that is making my eye twitch. It seems like a seam is off or something.

Still, the effort impresses the judges. Heidi calls the gown exquisite and can picture it on a red carpet major star. After dinging him for the “wedding party” styling, Kors waxes poetic on the fabric manipulation, which he knows is labor intensive but looks effortless. 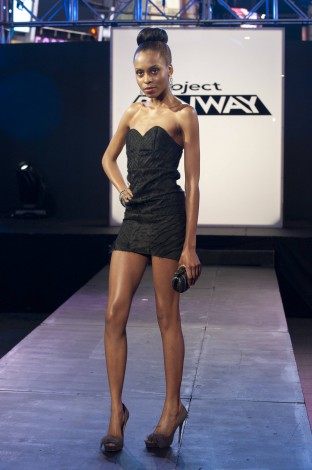 The dress Christopher made on the show is ill-fitting and too short. 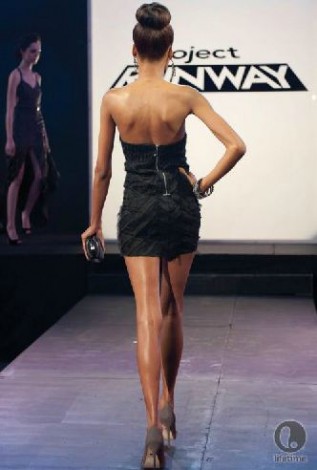 And the back zipper is buckling.

While in the workroom, Christopher seemed to realize he was struggling. He was having trouble with his machine and starting to panic. Tim calmed him down and told him that he at least has one gorgeous dress. Apparently, one stunning dress was enough.

Nina briefly acknowledges the problems with the LBD but other than that the judges seem willing to forgive and forget.

So, Christopher Palu, watch out for toddler tantrums and enjoy your tiara!