Well, it is the famous “unconventional materials” challenge on Project Runway Season 10. Or, as it has been come to be known lately, the “Glue Junk On” challenge. I kid. I kid because I love.

The remaining 15 head off to Dylan’s Candy Bar which, O-M-Gee you just have to see to believe! 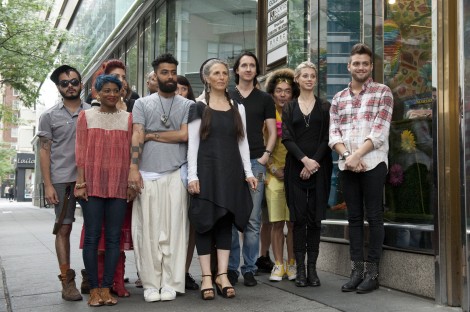 I have to admit, though, that after my initial squeal of delight, I thought: “They are just going to hot-glue the candy on like beads.” I almost wish they would ration the hot glue because the designers are most innovative when they actually create a new fabric out of the unconventional materials.

Besides, as Elena later discovers, glue guns are dangerous in the wrong hands. Christopher, however, blames her burn on “wearing hoochie shorts to work”.

After acting like, well, kids in a candy store, the designers are back in the workroom. Tim enters to crack the licorice whip. Okay, okay, I will try to stop now.

Ven says he is making something to mimic stained glass and I just had an art history moment. Fabio also has rock candy and is going for the “Modern Jackie O” because, yeah, that’s completely original. Buffi “The Taste Slayer” (not sure who came up with that but it wasn’t me) has a bubblegum palette of what looks like, well, bubblegum, and is weaving it into fabric (yay for weaving!).

Gunnar is still busy throwing shade at Christopher and muses, “He is threatened by me. I don’t know if it is my designs or my personality?”

Raul is also working some technique magic with his material. Melissa has achieved a leather-like effect but I wonder what is going under it.

Sajai has a beautiful “sea glass palette” according to Tim

Elena is using the deadly glue gun on some sickly smelling pina colada licorice…which totally looks like pasta to me.

I love how creative the designers are to find euphemisms for “glue junk on”: we hear they will “embellish it”, “decorate it”, “emphasize it”, etc.

Tim is underwhelmed…and not just by Lantie’s wasted attempts at flirting but by Andrea’s efforts, saying it lacks precision and looks like a throwaway craft project. Tim is not just concerned. He is disappointed AND concerned. Wow.

It is runway day and people try to repair the melting cotton candy and falling pieces of embellishments. Duuude…. the workroom is a colorful mess. Love Ven’s directions to models

Let’s head off to the runway but, before we do, judges…? 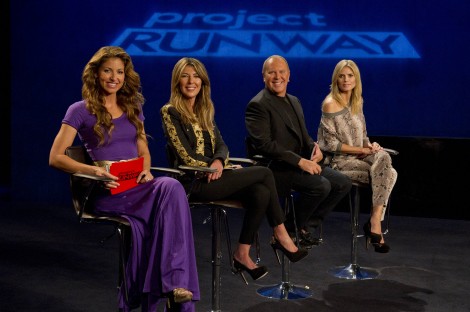 As usual, the creative designers you think will blow this one out of the water fall short and the more traditional designers end up on top. I think that the wackier designers become too overwhelmed with the possibilities while the more traditional designers are given permission to break out of their molds and go just far enough outside of the cracker-jack box to make something special. Okay, that was the last candy pun. Maybe.

The unconventional materials challenge requires designers to walk a tightrope between showing off an innovative use of the materials but making it look like fashion. My take on it is the squint test. If it transforms into something totally wearable if you just squint a little, then it is probably on track. Let’s see who managed to transform candy into couture! 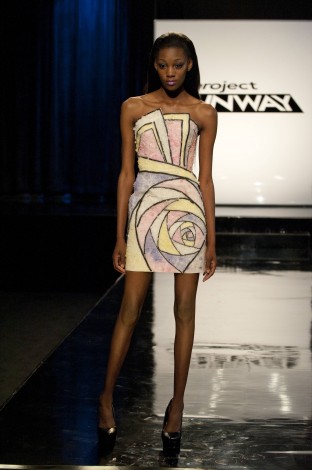 Ven takes the win for one of the more attractive dresses on the runway. Ven would like you to know he thinks so, too. Ven would also like you to know that he’s pleased he won this week’s challenge, like he should have last week, as well. Ven is perplexed that others do not recognize he superior skill and taste and award him the whole contest right now.

Anyway, Ven is praised for the design even though he repeats the motif from last week. Dylan, in what will be her primary critique of the night, is disappointed that he used only two types of candy. Daughter of a famous designer she may be but she seems more into her candy than her clothes.

Nina praises the color story as being on trend. Michael Kors likes that there is a “discovery” of wondering what the materials are. Personally, I don’t think smashing rock candy and then gluing it on is many steps above just gluing it on but hey, I guess at least some transformation took place. I do like the stained-glass panels and the shape of the neckline. 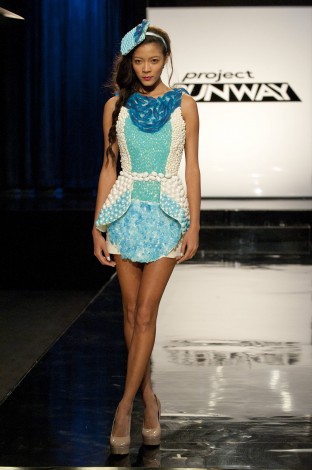 Also on top, in large part because of her pretty color scheme and excellent use of gummy sharks is Sonjai. While normally this would be too theme-y for the judges, they like it for this challenge. And it does look like sea glass and pearls. The shape evokes an oyster. It is a little stiff but given the materials that is to be expected. She put a little more thought into it but really, ultimately, just glued pieces on the muslin. Heidi likes the texture and Nina says this is a Jetsons’ mermaid costume…but in a good way. 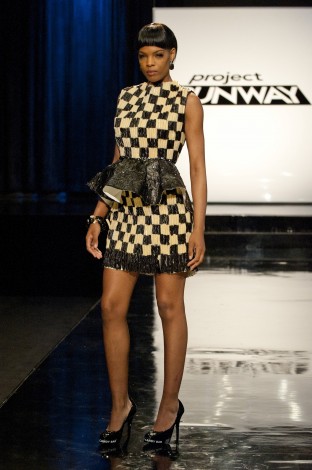 Gunnar slides into the top three but I’m not really feeling it. The judges like that he created a pattern but it is just a checkerboard pattern so, I’m not impressed. And why do these designers add peplums? Is it just so they don’t get the critique that it is under-designed? This would have looked much nicer as a sleek cocktail dress but it is just okay.

Now let’s move onto the bottom of the gumball machine: 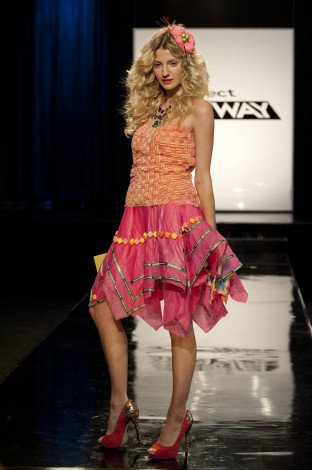 Buffi has already garnered the dreaded “taste issues” criticism with this confection. The color scheme screams candy store perhaps too literally. What really lands her in the bottom, though, is her fabric skirt, minimally embellished with candies. If she had woven the entire dress and gotten it to lay flat, this could have been a winner. At least she actually used a technique to create a fabric from the unconventional material for her top half! 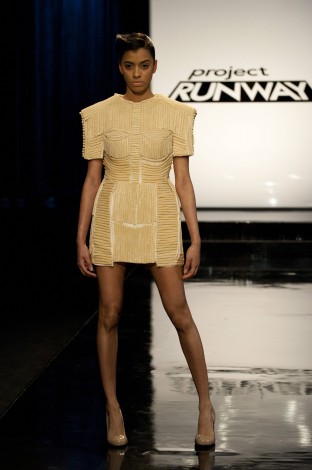 Elena’s macaroni craft project is falling apart on stage but what concerns the judges more than the execution is the heaviness of the garment. Elena has a warrior-woman aesthetic but the judges see droopy eyes and an old man’s mustache and Michael Kors dubs this “Rigatoni Mad Max”. Elena gets defensive. Honestly, it is tough getting critiqued and if you just disavow it then you get auf’d for being wishy-washy and if you defend your work, you get auf’d for a bad attitude. It is a tough line to walk for someone who is already on edge.

Still, her mistakes are not quite as bad as Lantie’s. 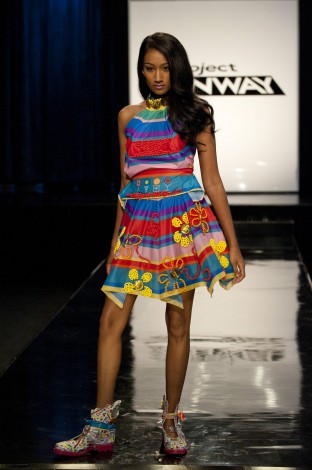 Lantie’s dress was poorly executed out of actual fabric. This is the mortal sin of the unconventional materials challenge. Far worse than glue-gunning it is just ripping apart something fabric, in this case an umbrella, to make your garment. Frankly, I’m not even sure she ripped it apart that much. Lantie was on the bottom last time and could have gone then, easily. And she made the second mistake of using the worst defense possible on the runway: “time constraints”. This is even more grating than blindly sticking to your aesthetic no matter the challenge because every sing other designer had the same amount of time and still managed to pull something together. When you have an even playing field, you cannot claim something is unfair.