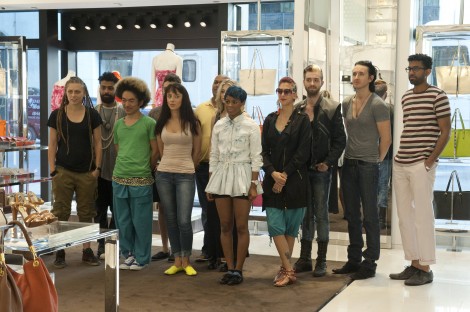 Our designers gather at the Michael Kors store and learn they are designing for the jetsetting, modern woman who needs to get off a plane, take a meeting, and hit a cocktail party. Or, as my mom likes to say to my kids as they head out to school, lessons, play dates, or activities, “On the move, in the groove!”

Hey, sounds like BlogHer! Most days I work in my PJ’s but one weekend a year, I can relate! 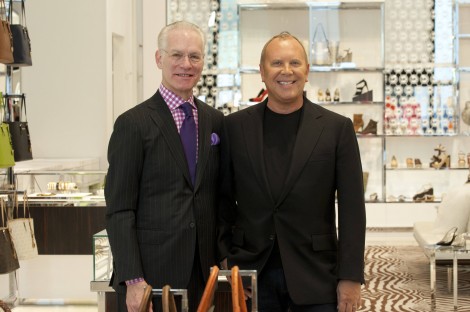 Okay, so there is DRAM-MA. Namely, Andrea walks out in the middle of the night and then later Kooan has a sad and quits. So, Raul is back. 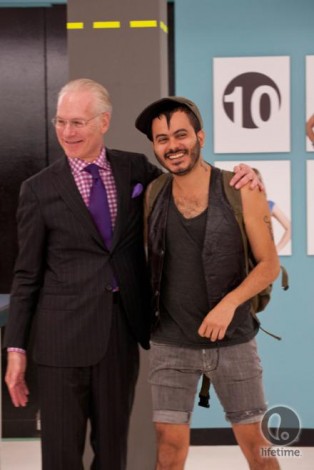 Whatever. He’ll be gone again, soon.

Gunnar’s playing to the cameras aside, this is actually a group of decent human beings and so the drama doesn’t feel quite so dramatic. Everyone seems genuinely bummed that people have thrown in the towel but accepts it and moves on to the work at hand. There seems to be a camaraderie and professionalism underneath it all this season that I recall from earlier years. True, there are spats (these are creative people under ridiculous time constraints) and there are a few camera hogs determined to grab their 15 minutes but, overall…these contestants just seem very likeable and possibly even talented.

Tim initiates a group circle, everyone except Ven sings Kumbaya, Kooan says, “See ya, wouldn’t want to be ya!” (Actually, he says, “Make it work!” as Tim leads him out.), and then we get back to the challenge at hand.

Another thing I love about this season is a renewed emphasis on Tim’s role as mentor. I really enjoy hearing him encourage and challenge the designers with more than just a catch-phrase. So, let’s hear what Tim has to say!

Back in the Parson’s workroom, Dmitry is working on something with a single seam. The rest of the shaping is a pleat/dart hybrid. A plart? A deat?

Sonjia is also working in the same color as Dmitry (quick! call Michael Costello!) but has a more drapey jersey. Love the grey and look forward to seeing both of their garments. Sonjia says she is adding a sleeve. “One or two?” inquires Tim. This is Sonjia so yes, she will get two.

Dear, dear Fabio: that fabric is cool but I’m going blind. And why did you cut it so short? Measure twice, cut once!

Tim warns Gunnar not to overdesign and then admonishes Elena that the judges have seen this silhouette from her before. Buffi, he says, has too many competing designs. Christopher is told to toughen up his overly-dressy look and we cut to Sonjia who says Christopher is consistent, if not innovative.

Christopher decides to try to “help” Buffi by offering her his fabric. 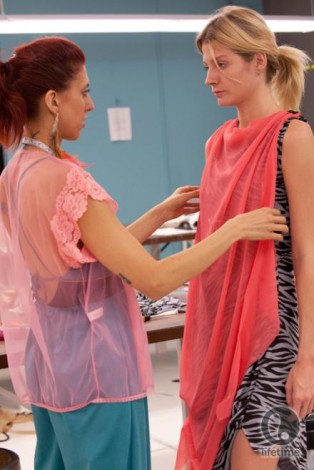 Buffi either listens but ultimately rejects his advice or just humors him. Regardless, she decides to remain true to her design aesthetic and, because Christopher is still working out some sort of issue from middle school and needs everyone to like him, follows her around with a hurt puppy look on his face. First Andrea left and now Buffi totally hates him, he just knows it…who will he sit with at lunch? Christopher is a decent enough designer but he needs to toughen up himself as well as his garment.

Nathan is told his dress looks sad, Alicia is advised to watch the proportions. Melissa is making four different pieces (yikes!) and Raul is squandering his second chance.

Ven has immunity. Ven is indifferent about his good fortune. Ven will continue to design whether you are judging him or not. 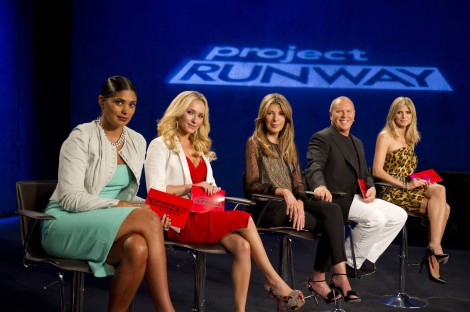 Let’s hit the runway and check out the designers who are moving on up and those who have a one-way ticket to auf’ville.

First, let’s take a look at Heidi. What a flattering shape but seriously, is it Halloween already? Did Heidi decide to dress as multiple definitions of “cougar”?  Of course, this is way too tame for a Klum Halloween costume–clearly she is just skinning her way through the faux animal kingdom.

Christopher Palu: I will give him this, his model looks elongated in a mostly flattering way. And I love the jacket. But the dress looks odd under it and does not look “day to evening” to me. It just looks evening. Plus I hate the draped fabric flap. Personally, the dress looks a throw-away to me. This look is all about the jacket. However, the judges have high praise for Christopher. Heidi loves it and is amazed he did it on that budget. Frankly, I think the dress looks cheap but the jacket could easily retail for a few hundred so, I get that.  Nina says it is polished, easy, comfortable, glamorous…and is apparently going to save fashion as we know it. I am amazed Nina is so effusive. 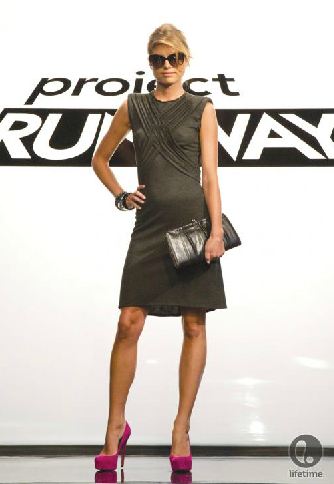 Dmitry Sholokhov: This is totally a dress you could wear under a jacket to the office (too bad he didn’t have time to make a jacket or sweater or some little cover-up) and then pair with awesome shoes and some bling and paint the town red. 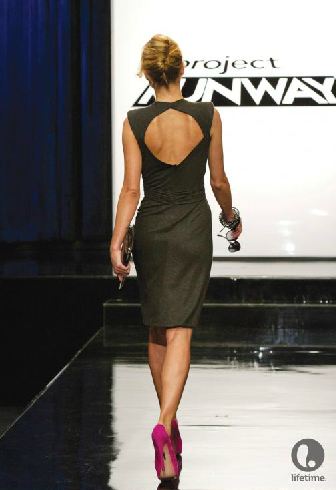 There’s the wow factor. Gorgeous. Just gorgeous. Ultimately, though, the judges felt it was too safe and too simple. At least Dmitry was placed in the top three this week! #TeamDmitry! 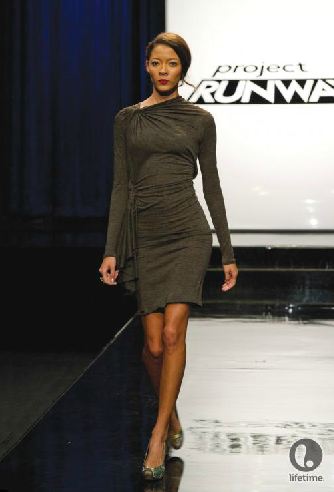 Sonjia Williams – WINNER! Sonjia makes a smart call heading straight for the jersey. This is a go-to fabric for travelers. However, she chose such a sheer jersey that you can see right through it on the runway. That issue aside (which I am sure she would have modified under more realistic circumstances), I thought this was a lovely, if somewhat “done,” dress.

True, can go anywhere in this dress…but you can also buy it anywhere. I’ve seen some chatter online that this dress is too sexy for the office but I think a blazer would solve that issue simply, which is part of what makes this a perfect dress for a woman who has to do it all, without any changes.

There are some minor execution issues: the dress is lumping and pulling in places that seem unintentional. When her model slouches (STAND UP STRAIGHT, YOUNG LADY!…sorry, channeling my Granny there), she has a little poochy stomach. Maybe she ate a whole grape before the runway show? I don’t really have an issue with this as the win, even though I would have maybe gone with Dmitry’s cleaner take on the grey dress.

Stuck in a rut we have… 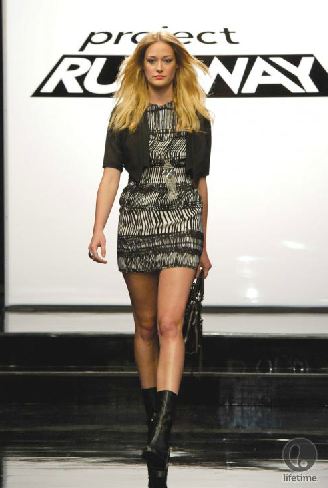 Fabio Costa: Oh, fabulous, fab, Fabio…measure twice, cut once! How did you end up with such a short skirt, sweetie? The print is fun but too much makes me dizzy and he relies too heavily on it. The jacket is cute but too short with the micro-mini dress. Kors thought it was too structured; he wants to see what Fabio presents himself on his woman. Fabio gets let off with a slap on the wrist though, because there are two train wrecks on the runway. He will have to step-up his game, though, if he wants to keep on the show after the canon fodder has been expended. 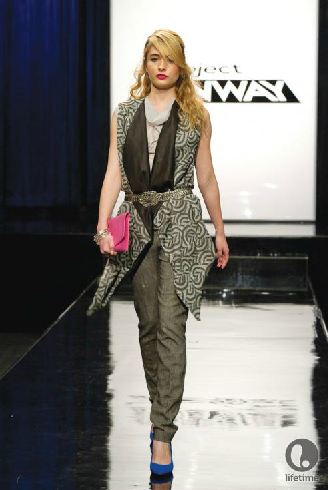 Raul Osorio: Sloppy. Sloppy 80s re-tread. Who is his girl? Lisa Bonet on A Different World, as interpreted by Sears? The unflattering shape…the clumsy mixing of fabrics…ugh. Just ugh. 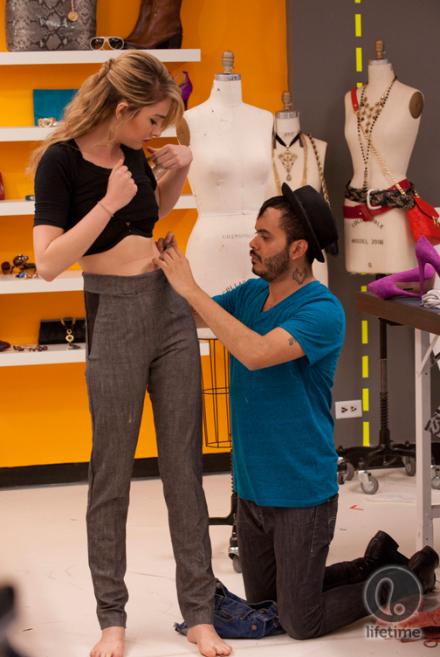 And how do you make your paints too narrow for a model? Was he using a floor lamp as his mannequin?

I would say “kill it with fire” but I am concerned about the toxicity of the fumes. 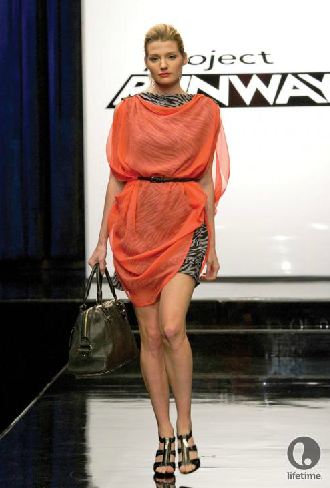 Buffi Jashanmal: That leaves us with Buffi for the auf. Losing her and Kooan in the same episode sucked the life right out of the room. Not only were they both wacky, they were both warm and friendly.

Although I doubt Buffi would have lasted much longer, I think her look was better than Raul’s. Both were sloppy but Buffi’s at least had a kernel of an idea and an identifiable style.

Someone with better sewing skills could have made this work. If the zebra dress had been impeccable and the sheer coral drape given some shape, instead of just draped and belted, this would have at least been interesting. I don’t object on principle to someone (other than me) wearing this…even to a (very specific type of) office setting and then jetting off to, oh, say, Dubai? I can’t help but think that if Betsey Johnson had been the guest judge this week, Buffi might have survived to sew again.

Without perfect execution, however, she ends up, as Michael Kors said, with a hair-dressing smock. Nina tears into her for attempting to cover-up the imperfections with the tunic and then calls it “even more pathetic” when Buffi says that was not her intent.

Buffi remained a class act on the runway, defending her style without getting defensive. Perhaps with a little more experience she could really show the world something fun. 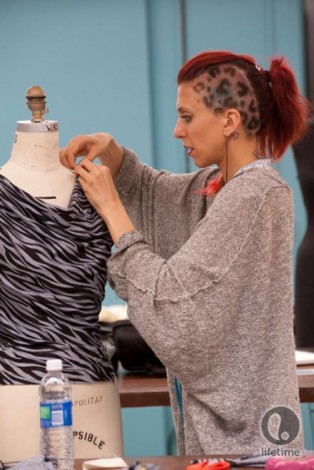