One of the biggest pressures a parent faces is: “What should I do for my child’s birthday party?!”

With parents budgeting hundreds (sometimes thousands) of dollars on extravagantly themed birthday parties, the simple at-home birthday party has fallen to the wayside. With themed-birthday parties starting as young as age 1, there is a lot of pressure to “out-do” last year’s party. So by the time a child turns 5, parents are often at a loss for what to do next.

Luckily, thanks to websites like Pinterest, there are new paths being forged back toward the simple at-home birthday parties. Even better? They are DIY! From a Hungry Caterpiller Birthday Party to a Rainbow Party, there is no lack of inspiration floating around Pinterest. This is fantastic for some people who have the ability to pull together the themed at-home parties themselves. But what about parents who work or just lack the creative know-how?

WishWorks (by Chasing Fireflies) has you covered!

WishWorks is a children’s party boutique, where parents can order themed-party items, such as cake toppers or plates, a la carte. Or, parents can shop an entire party theme (such as this fun Lego City party) and get everything from decorations to invitations all in one place! The beauty of WishWorks is that it allows the simplicity of an at-home themed birthday party but alleviates the pressure for parents to come up with the theme all by themselves. 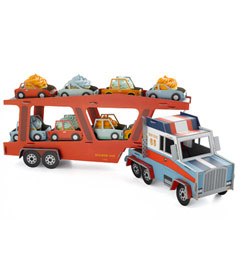 We have a boy’s birthday party coming up, and what do boys love? TRUCKS!  So we are going to utilize the super fun truck centerpiece from the Big Rig’s Party theme. It’s a great alternative to a truck cake (and way easier than me trying to construct said cake myself). I love that i can fill it up with cupcakes and still perfectly fit my party’s theme.

Take the stress out of your next birthday party and check out WishWorks: http://www.wish-works.com.

DIsclosure: I was provided a caketopper in order to facilitate this review. All opinions expressed are my own.