Menu
Search
Home > Entertainment > Broadway Philadelphia: Disney’s Beauty and the Beast at the Academy of Music 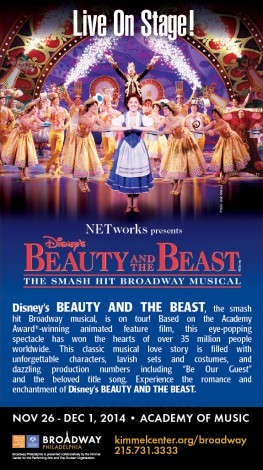 With the kids off from school for the Thanksgiving holiday, it’s the perfect time to take them to see Disney on Broadway (Broadway Philadelphia that is)!

Disney’s Beauty and The Beast, the smash hit Broadway musical, has returned to Philadelphia! Based on the Academy Award-winning animated feature film, this eye-popping spectacle has won the hearts of more than 35 million people worldwide. This classic musical love story is filled with unforgettable characters, lavish sets and costumes, and dazzling production numbers including ‘Be Our Guest’ and the beloved title song. Experience the romance and enchantment of Disney’s Beauty and The Beast at the Academy of Music!

The show opens tomorrow, November 26 at the Academy of Music and runs through Sunday, December 1.  For tickets and more information, please visit: http://www.kimmelcenter.org/broadway/

Previous Post
Trista Sutter’s Happily Ever After- The Life Changing Power of A Grateful Heart
Next Post
Help Support the 10th Annual St. Jude Thanks and Giving Program!