Although the “spoilers” have been warning for weeks that the outcome of Project Runway would be “unexpected”, I was still hoping Mondo Guerra would be declared the winner. 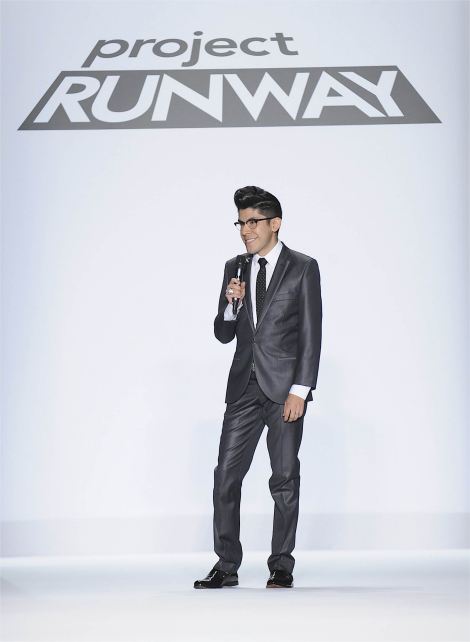 He had a lot of beautiful pieces and his talent is clear to almost everyone with eyes.  Still, I thought that he relied too much on his innate ability to mix prints, rather than on his gift for design.  I would have liked to have seen a few more gasp-out-loud pieces, like the full-length polka dot dress. 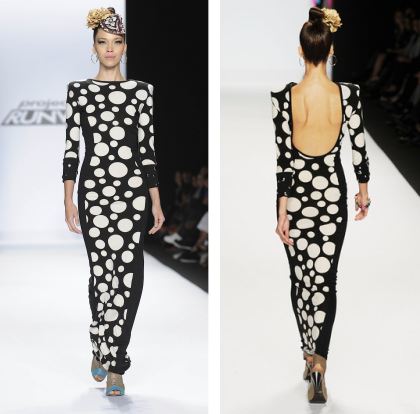 But in an over-all weak season, Mondo was definitely the stand-out, both as a designer and as a human being.  Even if the judges somehow managed to miss his brilliance, I thought the upset would come from Andy South, an uneven and young contestant during the competition who delivered big during fashion week with an elegant, ethereal and cohesive, if somewhat monotonous, collection.

Never did I imagine the winner would be Gretchen Jones, she who walks through thunder or rises from the ashes, etc.

If you missed the finale, you can catch full episodes at MyLifetime.com.

Mondo Guerra drew his influence from his Mexican-Catholic heritage, specifically circuses and the Day of the Dead.  I was a bit surprised the judges were dismissive of the circus idea considering there was a circus challenge during the previous season.  The judges thought the collection was unwearable.  Heidi, Jessica Simpson (of all people), and well, me and 90% of the gay and/or female population of the Internet disagreed.  Tell me that there isn’t a market for this top: 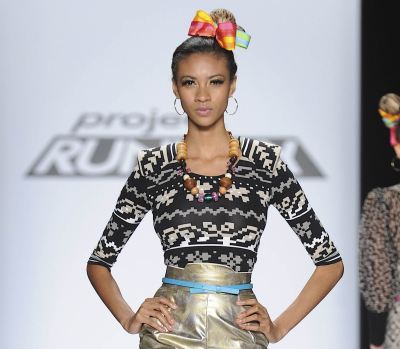 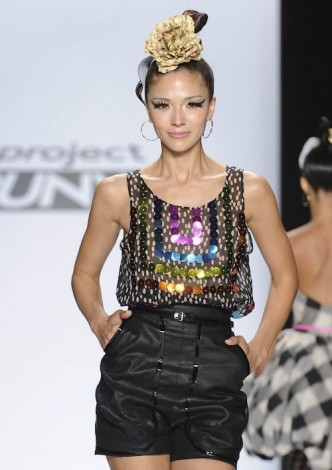 Or this skirt, or for that matter the leggings on the model exiting the runway in the background: 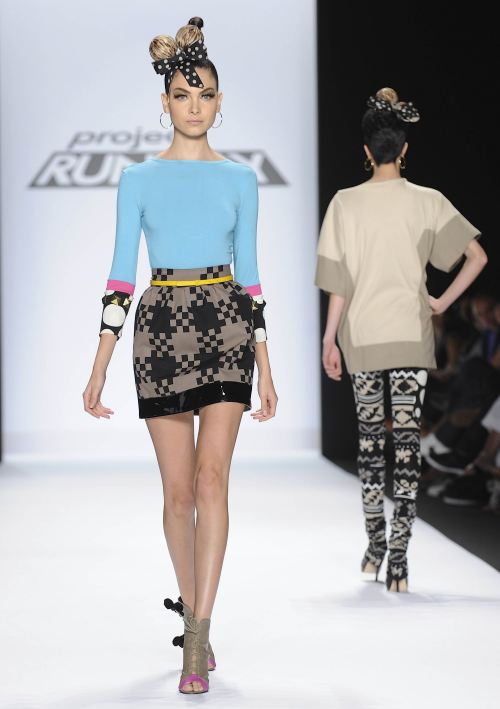 Michael Kors answered Heidi’s defense of Mondo by saying that it was not their job to re-style the collection but, um, again, I am not a professional but isn’t the whole point of a runway collection to put on an exciting show, from which buyers select the pieces that real women will pair with jeans, black skirts, and blazers?  I’ve heard the judges say before that they aren’t there to re-design the pieces but when talking about wearability within the context of a runway collection, it makes sense to consider how separates work as, well, separates.

The other argument Michael Kors and Nina Garcia made against Mondo was that his collection was not “on-trend”, an argument that Tom and Lorenzo at Project Rungay deftly contradicted with a neat montage of bold, patterned, and / or Mexican-inspired garments from the runway shows of top designers.  Make sure you click over to Project Rungay for the full montage with larger images. 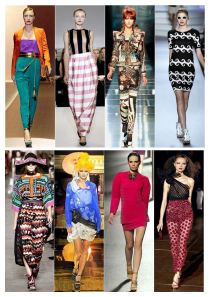 Based on the judges’ critique, it seemed that Mondo’s collection suffered coming on the heels of Seth Aaron’s collection.  Although the two have very different aesthetics, they were both bold collection that played with large patterns in unusual ways.  I guess the judges felt they had to crown a very different type of winner this year.

The final criticism was that Mondo’s collection read as “junior”.  Sure, Mondo’s look is vibrant and youthful but so are a lot of very weathly customers.  His clothes always look upscale and luxurious, even if they are whimsical.

Mondo fans of all ages will just have to wait to get their hands on his designs–Mondo says he doesn’t have a website yet, not even business cards! Here’s hoping that Mondo gets an influx of offers to help him start producing the brilliant ideas in his head.

Read what Mondo Guerra had to say during his interview about the final judging, telling his parents about his HIV-positive status, and the outpouring of support he has received from viewers and his fellow designers:

Candace Lindemann from Mamanista.com: The judges seemed to read your collection as “junior” or a bit more youthful—who is “your girl” you are dressing and how do you describe your aesthetic?

Mondo: Well I think my aesthetic is definitely fun, joyful. And it is for a girl who is not very timid. I think that people who wear my clothes have to be very comfortable with themselves and self-expression. I think that she is definitely a standout. And, you know what? This whole thing about being junior-wear and too teeny-bopper, I think that fashion should be fun. And that if you are 65 you can still wear a mini-skirt and look great and feel fabulous in it. I’ve had so many e-mails and messages from people on facebook that say, I’m 62 years old and my daughter is 24 and we would wear the same things that you showed last night. I know that I have such a huge demographic and that it is not about what people say is right…it is about what you want to be. After all, they are just clothes. 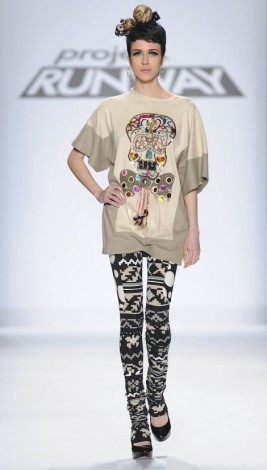 Lindsey from Reality Wanted: One of the main critiques for you was the judges thought you were too bold–was that your downfall?

Mondo: Some people might look at it as a downfall, I still look at it as a strength. I think that what I bring to the table is different from what everybody else on the show gave. I thought I would be recognized for that so that’s why I didn’t change anything. I was really happy with what I presented and looking back, I wouldn’t change a thing. I think that it was exactly the way it was supposed to happen and for that I am very, very grateful.

Louis from MovieLine: When the judges said, it was “too much like Seth Aaron’s” and “not on-trend”?

Mondo: I don’t think they said that it looked like Seth Aaron’s. They said “it was the cousin” and none of my cousins look like me, I’ll say that! Just like Heidi says, ‘one day you’re in and the next day you’re out’ and hopefully I have some longevity in the business. Okay, maybe I didn’t win tonight but I’m going to win tomorrow.

I think they were pulling at straws. I think they really had to find a way to get around it. In the beginning, Nina said, “I want to pick two winners.” So, I had Heidi, Nina and Jessica on my team. The only one that wasn’t on my team was Michael. So, how did Michael persuade the final decision—I don’t know how it works. 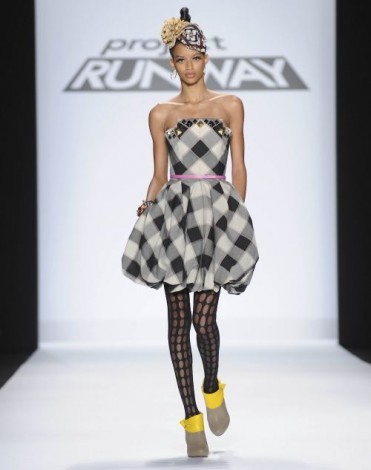 Paulette from ET Online: Did you tell your parents [about your HIV-status] when you got home and how did you react to that?

Mondo: I didn’t wait until the show. I waited […] four days before it was aired. I knew that I was going to fashion week and I had to create a line and that I had to stay focused. I knew that if I added another dynamic in our already chaotic family lifestyle… I didn’t know what to expect so I was really just taking the time to focus on what I had to do to accomplish 110% of what I wanted to show. But when I told them it was at a really small dinner with my partner and my mom and dad and sister. There’s no easy way about doing it.. I’ve been waiting 10 years to talk about it. So, I just laid in on the table and waited for their response. They told me that they love me and that our family is a very strong family and that we’ll get through this together. I really underestimated the power of their unconditional love and now it has just made me a better person. I can be exactly who I am in front of my entire family. I don’t have to be the quiet one, hiding. So, I’m very happy.

Jen from Digital Spy: Most of your fellow contestants named you [as the contestant they want to win]. What do you think it is about your work that people really connect with or find special?

I am so virtually connected to my work. I live colorful life and that’s what I make. I make colorful crazy clothes and I think it is fresh and it is new and it is fun to look at and fun to be around. I think the designers appreciate that about me. I brought something different to the table. It is nice to be recognized by my fellow designers because that’s the best compliment. 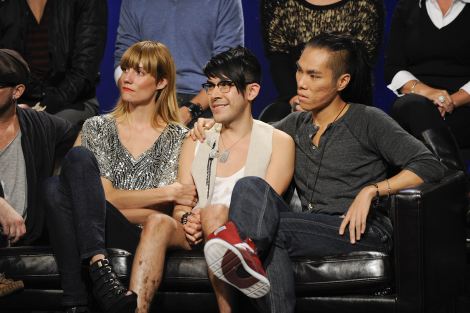